❤💙💚💛House Points have been awarded for this extremely well researched and interesting post.

In the film version of Harry Potter and the Prisoner of Azkaban, it is stated that Sirius Black has been sighted in Dufftown and Hermione replies "Dufftown? That's not far from here." Dufftown is in the Cairngorms and if we accept this statement from the film, that would place Hogwarts in the Cairngorms too. However, the book says only "... they reckon Sirius Black's been sighted [cut] Not too far from here [cut] It was a Muggle who saw him." [PoA ch. #07; p. 96]. So the association with Dufftown belongs only to the films, and does not fit with the films' simultaneous presentation of Hogwarts as accessible via the iconic Glenfinnan Viaduct.

Glenfinnan is in the far west very close to the sea, and Dufftown is about forty miles north and eighty-seven miles east of it. To get from the vicinity of Glenfinnan to the vicinity of Dufftown you would expect to travel south-west to north-east along the great valley called Strathspey, alongside the A86, A9 and A95 roads. Alternatively you could just head due east, ignoring the roads and bumping up and down over a series of mountain ranges, but in that case you would enter very wild country about eighty miles (well over an hour's journey) before reaching Hogwarts.

Even if you travel from Glenfinnan to the area near Dufftown via Strathspey, your problem is that Glenfinnan's proximity to a very jagged coastline means that it is almost impossible to approach Glenfinnan overland coming from the west, unless your starting-point is Mallaig on the west coast. Coming from the south, you either come up the east side of the country and head south-west down Strathspey, in which case you pass by Dufftown a hundred miles before reaching Glenfinnan, or you come up the west side and arrive at a geographical T-junction in the vicinity of Fort William, with Glenfinnan about ten miles due west of you and Dufftown eighty-five miles north-east along Strathspey. To come broadly from the south and pass over the Glenfinnan Viaduct before reaching the Dufftown area, you would have to come to that T-junction and either turn left, travel west across the viaduct heading towards Mallaig and then turn 180° round and head back across it going east, or leave the route of the Muggle line and describe a pointless loop around the countryside near Mallaig - weaving about wildly in order to avoid the many long thin lochs with which the area is cleft - in order to approach the viaduct from the western, Mallaig side.

Since the two assumptions in the films - that Hogwarts is accessed via the Glenfinnan Viaduct and that it is near Dufftown - cannot both be true without assuming a pointless digression with no purpose other than to pass over the pretty viaduct, we can discount the information from the films. This doesn't necessarily mean that Hogwarts isn't in the Cairngorms/near Dufftown, nor that it isn't accessible via the Glenfinnan Viaduct - but it can't be both, so their appearance in the films carries no canonical weight

Whilst following the route of the Express quite closely, the flying Ford Anglia passes over Peebles, a small town in south-east Scotland. This means that if Hogwarts were in the north of England the train would have to double-back on itself somewhere past Peebles and head south again, and there's no suggestion that it does so - so Hogwarts too must be in Scotland. But where in Scotland?

Sunset in Britain on 1st September, when the train travels, would be about 7:45pm BST in London, 8:15pm BST in the Highlands. What place, is 9 hours away from London?

As such, i conclude, that i'm stuck! Help me pls.

All I know is, it's in Scotland.

Check this out here

Hogwarts precise location is yet unknown. All we know it's located in the Highlands of Scotland, in the mountains near Ioch.

The reason it can't be located clearly is perhaps due to its Unplottablity. *

From the Hogwarts School of Witchcraft and Wizardry wiki page:

"...Hogwarts School of Witchcraft and Wizardry is the British wizarding school, located in the Highlands of Scotland. It takes students from the United Kingdom of Great Britain and Northern Ireland, and Ireland.

The castle is located in the mountains near a loch. The precise location of the school can never be uncovered because it was rendered Unplottable."

* Unplottablity means the deliberate concealment of several places around the world.

Besides that Dufftown statement was only in the movie and I don't think they put this much thought into it.

I think Hogwarts is located somewhere in the U.K., but I don't know where, the characters have British accents though so...

Man! So so much of research! Great job.

I would say that I will leave this for people staying close to Scotland.

I just know it's somewhere in Scotland and also, no one can just find it, after doing so much of research even if you go there searching for a large castle. I'm afraid you'll not be able to find it since it's protected and invisible to muggles.

Is it ever stated that the Hogwarts Express doesn't do at least a couple of stops on the way up from London to collect students who already live in the north/ north west.

Officially the rail line that runs over the viaduct doesn't even start until Glasgow- so possibly the H.E travels upto that point on an adjoining line makingit's way up North East as far as Mallaig, then coming back to cross over the viaduct and through a vast network of tunnels that run from say- Fort William, North East upto the Great Glen that is Ravenclaws hometown, then to Inverness and eventually across to Lochidorb south of Furness.. approx 34miles from Dufftown.

@Siruslypotty I have been wondering the same thing, it would be kind of silly to let Irish or Scottish children travel all the way to London, to take a train back to the north. However, the only time a stop was mentioned, was unplanned (with the dementors in PoA). And nothing is mentioned about other trains arriving at Hogsmeade, they all arrive in the same train.

As to the original question about where it is, I am of no help there :( You obviously have more topographic knowledge of Scotland than I do.

Well, the books don't specify the locations, but the films made the mistake of telling us EXACTLY where it is. The third film mentions Dowding Way and the fact that Hogwarts is close.

The 4th film, though, does this: 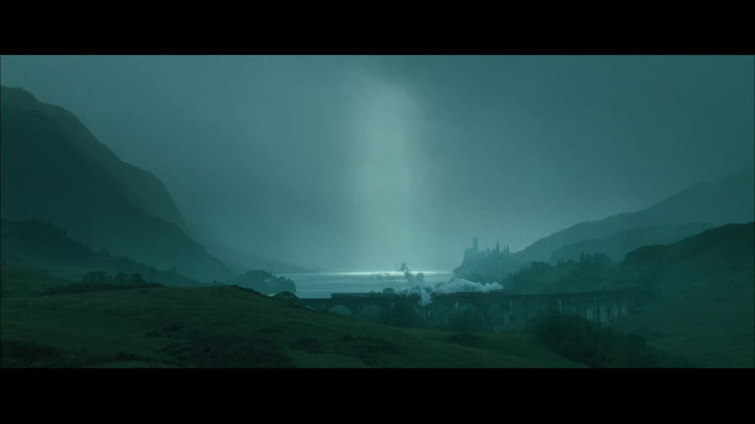 Hogwarts is literally after Glenfinnan Viaduct.

The films are very incoherent, though. That's one of the reasons I prefer the books. For some reason, everytime they cross the Viaduct, they cross it on a different time of day, at least it seems due to light intensity (independent of cloud intensity):

The comment that earned House Points here mentions train speeds and distances between Hogwarts, the Station where the Students leave the train and surrounding areas/populated areas. That is useless since it won't lead us anywhere. As far as I am concerned, the station is far from Hogwarts itself. We know 1st year students need to cross part of the Great Lake (also known as Black Lake), not necesserily meaning they cross it from one side to the other. The others use carriages pushed by Thestrals, as we learn from the 5th film.

If the Station was that close to Hogwarts, why would they need to ride the carriages or the boats?

Also, in the 3rd film, you can see that the Station is, indeed, very far from the School, right here: 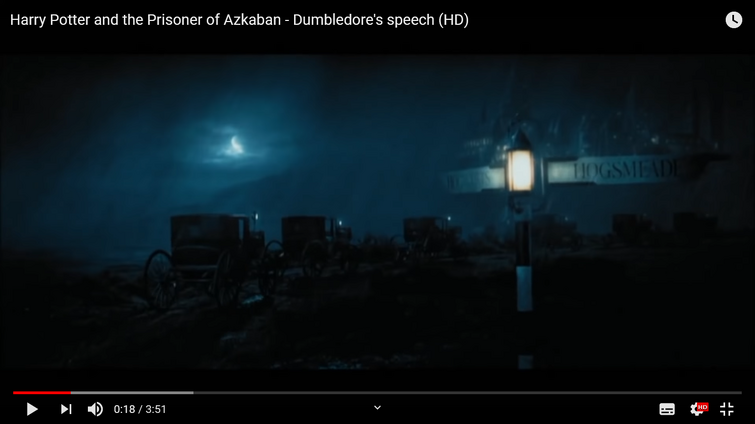 As you can see, we are still far from the school, so much that we have street signs pointing to Hogwarts and Hogsmeade. Assuming the Station isn't right there, we can presume that it's even further way.

Now the fact that they only arrive Hogwarts at night starts making more sense. Even if they reach the Station during the day, they still have a bit of a walk to do untill they reach the School.

That being said, even though it is unknown where Hogwarts is located, we can presume that, what we see in the 1st image can be entirely correct.

Why do they cross the Viaduct at different times of the day? We shall never know, maybe the books explain but that's where my ADHD starts to fail me for I have already read all books more than 30 times and seen all films more than 40 (I'm rewatching them this very instance, actually) but some things still escape me. Maybe technical difficulties, things we may never know.

In conclusion, Hogwarts is located within viewing distance from the Viaduct, in the margins of the Great Lake located between the school and the Viaduct, which happens to be one of the last things they cross before arriving the station, still a bit far from the school.