View source
watch 01:36
We're Getting Mutants in the MCU - The Loop
Do you like this video?
Play Sound

As Supreme Mugwump Anton Vogel's term came to an end in 1932, an election was called to replace him. Vogel was leaving office unpopular among many in the wizarding world, to such an extent that expectations for his successor were low. The election would be held in winter 1932, at the Magisterial Chamber of Ancient Wizardry in the mountains of Bhutan. The wizarding world was given two choices as the date of the election approached: Liu Tao, the Chinese Minister for Magic; and Vicência Santos, his Brazilian counterpart. During the election's campaigning phase, as expressed in a Daily Prophet article titled Who Will Triumph? Liu or Santos: Ministers vie for leadership, the election remained undecided, and magical governments worldwide remained officially neutral. However, high-ranking officials at the British Ministry of Magic believed that Santos would win the election.[4]

The election was, however, mainly overshadowed by deep troubles in the wizarding and non-magical worlds. Following the Muggles' world war between 1914 and 1918, wizarding concerns had risen about their new weapons, which had devastated large parts of the battlefields of the war. Anti-wizard sentiments in America, where memory of magic among No-Majs remained strong, had grown. And a vocal opposition to the International Statute of Wizarding Secrecy had developed, particularly among pure-blood supremacists who believed it was their birthright to rule over Muggles and other wizards.[5][6]

Exploiting these sentiments, a charismatic wizard named Gellert Grindelwald emerged, calling for wizards to come out of hiding and take control of the Muggle world as the Muggle's benevolent overlords. Several witches and wizards joined his cause, and began to carry out various attacks across Europe in the 1920s. These attacks culminated with the 1926 Obscurus attack in New York, and the 1927 Grindelwald rally in Paris. The actions of magical governments, who cracked down heavily on Grindelwald and his followers in an attempt to suppress dissent, caused severe disillusionment among the wizarding community with their leaders, and led many to join Grindelwald's followers.[6][5]

As the election date approached, and fears began to grow that Grindelwald might attempt to contest the election motivated by his energetic base, the International Confederation of Wizards was due to conclude its investigation into Grindelwald's activities, and announce what new charges would be brought against him. Anton Vogel, the outgoing Supreme Mugwump, would announce the results at a gathering at the German Ministry of Magic in Berlin. Both candidates, and their followers, travelled to the Ministry for the announcement.[4] To the horror, disgust, and disbelief of most wizards present in the gathering, Grindelwald was absolved due to insufficient evidence existing to prosecute him. 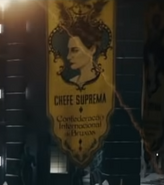 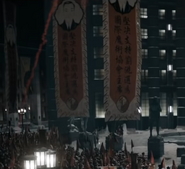