"You don't mean — you can't mean the people who live here? Dumbledore, you can't. You couldn't find two people who are less like us."
—Minerva McGonagall[src]

4 Privet Drive was the street address of the home owned by Vernon and Petunia Dursley.[1] They lived in this home with their son, Dudley as well as their nephew, Harry Potter, son of Lily Potter, Petunia's late sister and Lily's husband James Potter. Privet Drive lies in the village of Little Whinging, which was located in the county of Surrey, near London in the southeast of England. The neighbourhood consists of a number of almost exact replications of the Dursley residence — row upon row of executive houses for executive people.[1]

It is currently unknown as to whether Dudley lived in the house with his family after he married.

"While you can still call home the place where your mother's blood dwells, there you cannot be touched or harmed by Voldemort. He shed her blood, but it lives on in you and her sister. Her blood became your refuge. You need return there only once a year, but as long as you can still call it home, there he cannot hurt you. Your aunt knows this. I explained what I had done in the letter I left, with you, on her doorstep. She knows that allowing you houseroom may well have kept you alive for the past fifteen years."
—Albus Dumbledore telling Harry Potter about the powerful magical protection Harry has while he calls Privet Drive home[src]

The Dursleys bought the house and started living in it in 1977.[4]

Albus Dumbledore first visited the house in 1981, delivering the baby Harry Potter to be put into the Dursleys care after the murder of his parents.[1] Harry wasn't the only thing that Dumbledore left behind him on this occasion: he also invoked strong magic granting Harry absolute protection from Lord Voldemort and his Death Eaters whilst he was at the house, as long as Harry could still call Privet Drive his home, until he came of age on his seventeenth birthday.[5] As it happened, the Order of the Phoenix chose to move Harry to a different safe house — during the famous "Seven Potters" operation — a few days in advance of his seventeenth birthday, after which the magical protection was broken.[6] Before the Order's arrival, however, Vernon Dursley was worried that the plan was actually a cover for a plot by Harry to "get the house". Harry scoffed at this theory, noting "Just in case you've forgotten, I've already got a house". Both Harry's words and his tone of voice silenced his uncle, who couldn't think of a good argument against that.[7]

The Advance Guard assembled here when they came to take Harry to 12 Grimmauld Place in the summer of 1995,[8] as did the members of the Order of the Phoenix who were part of the Seven Potters plan in 1997.[6] The house was temporarily connected to the Floo Network by Arthur Weasley when the family came to pick Harry up to take him back to the Burrow for the remainder of the summer holidays in 1994. The fact that the fireplace was boarded up caused something of a problem, as wizards and witches aren't used to this sort of thing happening to their fireplaces and thus weren't expecting such an obstacle to be put in their path. In the end, Arthur destroyed the fireplace in order to get out, although he was kind enough to fix it before he left.[9]

"Colours like peach and salmon pink are distinctly un-magical, and therefore much favoured by the likes of Aunt Petunia. "
—The colours on the inside of the house[src]

The home consisted of two floors. Inside, the house was, if anything, even neater than the perfectly presented gardens.[1][10] Nymphadora Tonks in particular was moved to comment about how clean it was when she visited as part of the Advance Guard, although it has to be said that she is used to the walking mess that is her father, Ted Tonks.[8] The downstairs consists of a living room, dining room, kitchen and hall. And, of course, the cupboard under the stairs (Harry's old room) which was full of spiders and just large enough for a young boy to sleep in.[2] However, when Harry's first letter from Hogwarts arrived via Owl post it was addressed to "Mr Harry Potter, the cupboard under the stairs". It is believed that Vernon then became frightened by the idea that the magical world knew how poorly Harry was being treated and decided to move Harry to Dudley's spare room to keep himself from getting in to trouble. The upper floor was known to contain at least one toilet.[11]

The living room had a boarded-up fireplace, in front of which sat an electric fire, though it is unknown as to whether it was boarded-up before Vernon and Petunia moved in, or whether they boarded it up.[9] The living room is also decorated in pastel colours: badges, salmon pinks, and peache.[10]

The kitchen was filled with spotless modern top-of-the-range appliances, including a wide-screen television, seems to be mostly pink and white in colour, and was described as being surgically clean.[12] The dining room had a sizeable table just large enough to hold thirty-seven birthday presents and a few plates of bacon and eggs.[2] The layout upstairs used to consist of Vernon and Petunia's room, a spare room, Dudley's room, and Dudley's other room (in addition to a bathroom of course). Dudley's other room (the smallest of the bedrooms) was given to Harry by Vernon in 1991 — not an act of kindness but an attempt to prevent him receiving his acceptance letter to attend Hogwarts School of Witchcraft and Wizardry. This didn't go down well with Dudley of course, but he couldn't manage to make Vernon change his mind. The plan didn't work anyway, as Rubeus Hagrid eventually appeared to put the letter directly into Harry's hand, but Harry was allowed to keep the bedroom anyway.[11]

Inside his room, Harry had a bed, a wardrobe and a desk, and when he stayed there he kept his Hogwarts trunk there too. Hedwig lived in a cage set on the desk. The room also consisted of books, presumably Dudley's, which were never read and some of Dudley's old toys, many of them broken or beyond repair.[11] The other main feature of the room was the cat-flap that Vernon installed in 1992 — this was part of his scheme to keep Harry locked in his room forever following the notorious Dobby-and-the-pudding incident.[13] He also fitted bars to the windows at this time to stop Harry escaping — they only lasted for three days before Fred and George Weasley ripped them off with a flying car,[14] but the cat-flap stayed for years. Presumably it was removed after Voldemort's defeat and the end of the Second War, when the Dursleys could safely return to their house without risk of attack. At this point, finally, they would also have been free of Harry forever, and it is likely that nothing in the world could make Vernon happier.

The back garden was of moderate, if not large, size but was extremely neat; the emerald-green grass was pristine and short.[10] A large tree grew near the tidily-trimmed green hedge, and on certain summer days the leaves would blow gently across the ground.[10] Roses grew in small plots on either side of the back door, and a small potted plant hung from a lantern by said entry.[10]

A small wooden shed stood near the tree, right against the hedge, and was home to a rather large grey spider.[10] The Dursleys also had a moderately proportioned bench.[10]

There also seemed to be a conservatory and a greenhouse located in the back garden, the latter of which Dudley Dursley threw his pet tortoise through.[11]

In the front garden, the family grew Agapanthi and pansies.[5]

A little information is known about the immediate surroundings of Privet Drive. Wisteria Walk was nearby, and it's on the street that the Squib and Order of the Phoenix member Arabella Figg lives with her several cats.[12] Magnolia Crescent was also in the area. A dark alley next to a garage runs off this road, and it was here that Harry first saw Sirius Black in 1993. It is also where he and Dudley were attacked by Dementors in 1995.[15]

Magnolia Road, which adjoins Magnolia Crescent, ran down to a playground which contains a number of swings that have been broken by Dudley and his gang, with only one remaining in working order.[15]

Harry Potter: "What's this?"
Petunia Dursley: "Your new school uniform."
Harry Potter: "Oh, I didn't realise it had to be so wet."
— An example of how the Dursleys treated Harry[src]

Harry Potter
Add a photo to this gallery

The Dursley's nephew, Harry Potter, the son of Petunia's late sister Lily and Lily's late husband, James Potter, was delivered to the Dursleys on the front step the night after his parent's death. Professors Albus Dumbledore and Minerva McGonagall met at the front of the home, where they waited for the arrival of Rubeus Hagrid, who was charged with the retrieval of the baby Harry.[1]

For most of his young life, the Dursleys, who felt Harry was a burden on their family, forced Harry to live in the cupboard under the stairs on the ground floor of the home.[2] This was changed before the beginning of Harry's first year at Hogwarts School of Witchcraft and Wizardry, when the Dursleys discovered that the school was aware of Harry's horrible living conditions.[11] 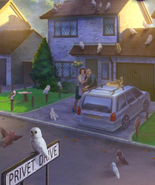 Vernon Dursley boards up windows
Add a photo to this gallery

Retrieved from "https://harrypotter.fandom.com/wiki/4_Privet_Drive?oldid=1402721"
*Disclosure: Some of the links above are affiliate links, meaning, at no additional cost to you, Fandom will earn a commission if you click through and make a purchase. Community content is available under CC-BY-SA unless otherwise noted.