Harry Potter Wiki
Register
Don't have an account?
Sign In
Advertisement
in: Ambushes, Battles of the Second Wizarding War
English

Ambush at the Lovegood House

Ambush at the Lovegood House

The trio learns about the Deathly Hallows and escapes with their lives.

There was an attempted ambush at the Lovegood House when Harry Potter, Ron Weasley, and Hermione Granger visited Xenophilius Lovegood during the Christmas holidays of 1997, during the height of the Second Wizarding War.[2]

Xenophilius, after informing the trio about the legend of the Deathly Hallows, tried to turn them over to the Death Eaters in order to get back his abducted daughter. They narrowly managed to escape.[2]

"It’s that mark, the mark in The Tales of Beedle the Bard. Look at this!... It keeps cropping up, doesn’t it? I know Viktor said it was Grindelwald’s mark, but it was definitely on that old grave in Godric's Hollow, and the dates on the headstone were long before Grindelwald came along!... we can ask Mr Lovegood. He was wearing the symbol at the wedding. I’m sure this is important, Harry!"
— Hermione Granger insisting they visit the Lovegood house[src]

After Harry Potter and Hermione Granger were attacked at Godric's Hollow on Christmas Eve, they became aware of a connection between Albus Dumbledore, Gellert Grindelwald, Godric's Hollow, and a symbol in The Tales of Beedle the Bard. The same symbol had been found on the grave of Ignotus Peverell in Godric’s Hollow, and had been worn by Xenophilius Lovegood at the wedding of Bill Weasley and Fleur Delacour. Hermione thought that Dumbledore may have wanted them to figure out the connection, as he had left the book to her in his will and they were at a loss as to where to find the other Horcruxes or what the symbol meant.[3]

Although Harry was sceptical, Ron Weasley — who had just returned to his friends using the Deluminator Dumbledore left him, and destroyed the locket Horcrux — agreed with Hermione, partly because she was still furious with him for leaving and he wanted to get back on her good side. Thus, the trio headed for the Lovegood House to question Xenophilius, though they were also eager to see Luna.[3]

To their surprise, Xenophilius did not greet them warmly when they arrived. His magazine The Quibbler, along with the radio programme Potterwatch, were the only media outlets telling the truth about the atrocities being committed under Lord Voldemort’s regime and advocating support of Harry and the Order of the Phoenix. Yet Xenophilius seemed reluctant to let the trio into his house and remained uncomfortable throughout their conversation.[2]

Hermione pointed out the Erumpent horn in the Lovegoods’ living room, as they are combustible and dangerous items to have. Xenophilius, however, was adamant that it was the horn of a Crumple-Horned Snorkack. He also began to waffle when they told him that they needed his help. When they prompted him to get Luna Lovegood, he wandered off saying he would – but in fact called Death Eaters at the Ministry of Magic with the news that Harry Potter was in his home.[2]

When Xenophilius returned, Harry asked him about the symbol he had worn around his neck at the wedding. At the wedding Viktor Krum assumed it was Gellert Grindlewald's symbol, as Grindlewald carved the symbol into a wall at Durmstrang. He informed them that it was actually a symbol of the Deathly Hallows, of which none of them had heard, though both Ron and Hermione were familiar with the tales of Beedle the Bard. Since Hermione had a copy with her, Xenophilius bade her to read from it.[2]

When she finished, Xenophilius explained that the items in the fairy tale were the Deathly Hallows — the Elder Wand, the Invisibility cloak, and the Resurrection Stone. Harry, Ron and Hermione were all very sceptical, though gradually, Harry came to believe that there could be truth to the story, given the similarities between his own Invisibility cloak and the one of legend. Xenophilius also expressed the belief that it was the Peverell brothers who were described in the story.[2]

Xenophilius stepped into the kitchen and Harry looked into Luna’s room — only to notice that it looked as if it hadn’t been touched in weeks. When they questioned Xenophilius and Harry noticed that he was one teacup short, he became alarmed, and everybody drew their wands. Hermione then spotted the newest issue of The Quibbler, which had a picture of Harry on the cover with the title “Undesirable Number One” and a reward amount for his capture, which Voldemort put up the reward from 2,000 galleons to 200,000 galleons because all finding of him was coming up a fail as he always escaped.[2]

Harry Potter: "The Quibbler’s going for a new angle, then? Is that what you were doing when you went into the garden, Mr Lovegood? Sending an owl to the Ministry?"
Xenophilius Lovegood: "They took my Luna because of what I’ve been writing...They will be here any moment. I must save Luna. I cannot lose Luna. You must not leave."
— Xenophilius preventing the trio from leaving[src]

Xenophilius revealed that Death Eaters had captured his daughter Luna, in order to force him to cease his public political dissension of them. He alerted the Voldemort-controlled Ministry that Harry was in his home in the hopes that they would return Luna in exchange for Harry himself.[2] At this point in time, Xenophilius was desperate to get his daughter back. She was his only child and possibly because she was a living reminder of his deceased wife.

The trio was momentarily distracted as two figures on broomsticks flew past the window, and Xenophilius shot a Stunning Spell at them, but Harry shoved his friends out of the way and the spell struck the Erumpent horn. Just as Hermione had warned, it exploded. Xenophilius was blown down the spiral stairs and the house was left mostly a wreck. The trio stayed quiet as they heard Death Eaters Selwyn and Travers enter the ruined house a floor below.[2]

"You can have your little girl, Lovegood, if you get up those stairs and bring me down Harry Potter. But if this is a plot, if it's a trick, if you’ve got an accomplice waiting up there to ambush us, we’ll see if we can spare a bit of your daughter for you to bury."
— Death Eaters threatening Xenophilius through Luna[src]

The Death Eaters beat and tortured Xenophilius briefly, convinced that he was lying about Harry being there and furious for him wasting their time. He insisted that he was telling the truth and begged that they return his daughter. Travers cast the Human-presence-revealing spell, and thus detected that there were people upstairs. They sent Xenophilius up.[2]

Hermione told Harry and Ron to trust her, threw the Invisibility Cloak over Ron, took Harry’s hand and had Ron put one on her shoulder, and aimed her wand at the stairs. When Xenophilius emerged, Hermione hit him with a Memory Charm and then blasted the floor beneath them. Travers and Selwyn caught a glimpse of her and Harry just before Hermione Disapparated all three of them.[2]

"Harry, this isn’t a game, this isn’t practise! This is the real thing, and Dumbledore left you very clear instructions: Find and destroy the Horcruxes! That symbol doesn’t mean anything, forget the Deathly Hallows, we can’t afford to get sidetracked… You don’t believe in this, do you?"
— Hermione Granger’s opinion of the Hallows[src]

Once they were safe, Hermione explained that she had hid Ron so that his story that he was sick at home with spattergroit was maintained, and let the Death Eaters see her and Harry so that they did not punish Xenophilius or Luna for seemingly lying to them.[4]

The trio then discussed the Deathly Hallows — Hermione was the most convinced that they did not exist, though Ron was also sceptical. Both were worried by Harry’s interest in the Resurrection Stone. He also realised that he was a descendant of Ignotus Peverell, that the Resurrection Stone was inside the Snitch, and that Voldemort was seeking the Elder Wand.[4]

Over the next few weeks, Harry became increasingly obsessed with the Deathly Hallows, and annoyed with his friends for their scepticism and insistence that they should keep seeking the Horcruxes, as Dumbledore had instructed them. Although the Deathly Hallows ultimately were revealed to exist, Harry realised that Ron and Hermione were right in persevering with the destruction of Voldemort’s Horcruxes.[4] It was this, as well as the Elder Wand’s loyalty to Harry, that enabled him to defeat Voldemort once and for all during the Battle of Hogwarts. 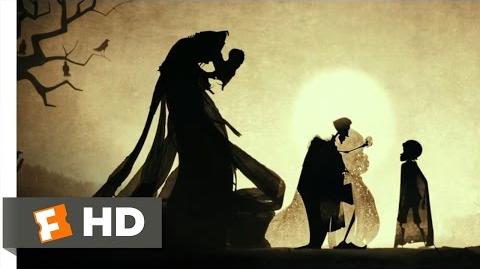 Español Polski Русский
*Disclosure: Some of the links above are affiliate links, meaning, at no additional cost to you, Fandom will earn a commission if you click through and make a purchase. Community content is available under CC-BY-SA unless otherwise noted.
Advertisement