When the Death Eaters arrived at Hogwarts, most of the Battle of the Astronomy Tower between the opposing sides took place in this tower, and in the corridor below. Death Eaters set off the Dark Mark above this tower; Albus Dumbledore was blasted from the tower's ramparts by a Killing Curse cast by Severus Snape. This was where Dumbledore met his death, by his own orders.[3] 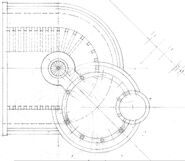 The Harry Potter Wiki has 49 images related to Astronomy Tower.

Retrieved from "https://harrypotter.fandom.com/wiki/Astronomy_Tower?oldid=1268275"
*Disclosure: Some of the links above are affiliate links, meaning, at no additional cost to you, Fandom will earn a commission if you click through and make a purchase. Community content is available under CC-BY-SA unless otherwise noted.