Harry Potter Wiki
Register
Don't have an account?
Sign In
Advertisement
in: Ambushes, Arson, Battles of the Second Wizarding War,
and 2 more
English

Attack at the Burrow

This article is about the attack during Bill and Fleur's wedding. You may be looking for the burning of the Burrow.

Attack at the Burrow

Part of The Second Wizarding War

The Ministry of Magic had been taken over by Voldemort. Death Eaters looking for information regarding the whereabouts of Harry Potter.

"The Ministry has fallen. Scrimgeour is dead. They are coming."
— Kingsley Shacklebolt's Patronus warning[src]

The attack at the Burrow refers to the short and rather chaotic skirmish at the Burrow in Ottery St Catchpole almost immediately following the fall of the Ministry of Magic, on 1 August, 1997.

After taking over the Ministry in a silent coup, the Death Eaters rapidly arrived at the Burrow, crashing the wedding of Bill Weasley and Fleur Delacour and interrogating those present, including several Order of the Phoenix members.

The Second Wizarding War had entered its peak phase in the summer of 1997. Albus Dumbledore, leader of the Order of the Phoenix, was killed by Severus Snape during an assault on Hogwarts School of Witchcraft and Wizardry,[1] and there was a break-out of Death Eaters from Azkaban which the British Ministry of Magic kept secret from the public.[2]

The Death Eaters attempted to murder Harry Potter when the Order removed him from his relatives' home in late July, and a battle ensued, but Harry escaped to The Burrow.[3] Others were not so lucky, as Alastor Moody was killed directly by Lord Voldemort in the battle.[2] Once at the Burrow, the Weasley family and friends celebrated the wedding of Bill Weasley and Fleur Delacour on 1 August.

However, that same day, the Death Eaters made use of the many high-ranking Ministry officials they had under the Imperius Curse, such as Pius Thicknesse, to execute a virtually silent coup d'état, taking over the Ministry. During the coup, the Death Eaters interrogated the Minister for Magic Rufus Scrimgeour in the hope of extracting the location of Harry Potter. Scrimgeour resisted his interrogators and did not disclose the information — for this he was killed by Voldemort himself.[4]

" [...] the Death Eaters have got the full might of the Ministry on their side now. They've got the power to perform brutal spells without fear of identification or arrest. They managed to penetrate every defensive spell we'd cast against them, and once inside, they were completely open about why they'd come."
— Remus Lupin telling the Trio about the attack[src]

Using their newly acquired power that comes with having the full might of the Ministy under their control, the Death Eaters rapidly organised attacks on every residence connected to the Order of the Phoenix. Kingsley Shacklebolt, who presumably was at the Ministry when the coup took place, was able to send his Patronus to warn the attendees of the reception at the Burrow. The warning happened in the nick of time.[4]

Seconds later the Death Eaters Apparated there, crashed the reception, and began to attack the attendees. Many of the guests managed to escape, including Hermione Granger who Apparated herself, Harry Potter, and Ron Weasley to Tottenham Court Road, away from the chaos before they could be captured by Death Eaters.[5]

Those who remained behind were roughly interrogated for hours by the Death Eaters who arrived to obtain Harry's whereabouts. They searched the Burrow from top to bottom and found the Weasley family ghoul, who had been Transfigured to resemble Ron sick with spattergroit, as a cover for him travelling with Harry and Hermione. His apparently diseased conditioned deterred them from closer inspection, and so Ron's cover was preserved.

At the same time, more Death Eaters broke into all Order-connected houses. Dedalus Diggle's house was burned down, although he was not there. Ted and Andromeda Tonks were tortured for information regarding Harry Potter and his location. The attack left them shaken but otherwise unharmed. There were no fatalities from these attacks.

In the meantime, Harry, Ron, and Hermione were tracked, after inadvertently breaking the Taboo on the word "Voldemort", by two Death Eaters, Antonin Dolohov and Thorfinn Rowle, to a small cafe. After a brief skirmish, the trio defeated the pair of Death Eaters and escaped to Grimmauld Place.[5]

"Family safe, do not reply, we are being watched."
— Arthur Weasley's Patronus gives the trio news[src]

Ultimately, those at the Burrow were released relatively unharmed. Arthur Weasley sent a Patronus message to that effect to Harry, Ron, and Hermione, warning them not to attempt contact, as the Weasleys were subsequently placed under constant surveillance by the Voldemort-controlled Ministry. Ron's cover story of being ill at home with spattergroit was maintained until the spring of 1998, when the trio were captured by Snatchers and brought to Malfoy Manor. This forced the other Weasleys to abandon the Burrow and go into hiding at Shell Cottage and Muriel's home. 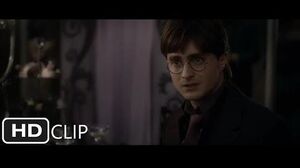 In the film adaptation of Harry Potter and the Half-Blood Prince the Burrow had been attacked previously, when Death Eater Bellatrix Lestrange and the werewolf Fenrir Greyback attacked and set fire to the Burrow during the Christmas season of 1996.

Deutsch Español
*Disclosure: Some of the links above are affiliate links, meaning, at no additional cost to you, Fandom will earn a commission if you click through and make a purchase. Community content is available under CC-BY-SA unless otherwise noted.
Advertisement