Extant
The Augurey, also known as the Irish Phoenix, was a thin and mournful looking magical bird, somewhat like a small underfed vulture in appearance, with greenish black feathers and a sharp beak.[1]

Its diet consisted of insects, fairies and flies, which it hunted for in the heavy rain. Intensely shy, the Augurey lived in a tear-shaped nest in thorn and brambles. The cry of the Augurey signalled approaching rainfall.[1]

It was native to Great Britain and Ireland, but it had spread to the rest of Northern Europe. It was long believed that the mournful cry of the Augurey foretold death, and wizards would go to great lengths to avoid Augurey nests. However, research determined that the Augurey merely sings when it is about to rain. Why I Didn't Die When the Augurey Cried, written by Gulliver Pokeby, was published in 1824 by Little Red Books, and dispelled the myth that the cry of the Augurey signalled impending death.[1]

Augurey feathers repelled ink, making them useless as Quill feathers.[1] However, the magical Quill of Acceptance that recorded prospective students for Hogwarts School of Witchcraft and Wizardry in the Book of Admittance was believed to come from an Augurey.[2]

When it was learned that Augureys could foretell the coming of rain, they were used as weather forecasters. However, the continual moaning from them during the winter months was difficult to bear.[1]

Uric the Oddball once owned fifty pet Augureys. On one particularly rainy day, they all cried at once, leading Uric to believe that he had died and was now a ghost. This led to him giving himself a concussion by trying to walk through walls.[1]

Jacob Kowalski encountered an Augurey Patrick in 1927, one of several kept in Newt Scamander's apartment.[3][4]

The gloomy, oversized Augurey Hans was the mascot for the Liechtenstein National Quidditch team.[5]

Euphemia Rowle kept an Augurey in a cage while Delphini was growing up; Delphini would later adopt it as her symbol and had a tattoo of an Augurey on the back of her neck. In an alternate reality where Voldemort won, she was known as 'the Augurey'. Making this connection allowed Albus Potter and Scorpius Malfoy to realise Delphini's duplicity.[6]

Augury was the ancient Roman practise of foretelling the future by observing the flight patterns of birds.[7] Today the word more generally means, "a sign of what will happen in the future; an omen."

The Augurey itself is a bird, and thus a play on words. As is the fact that the cry of the Augurey is used to predict rainfall, and was once thought to foreshadow death.

The addition of "-ey" at the end may indicate a portmanteau with the word "grey". Rainwater is grey, the Augurey is a greenish-black, and grey is often shown to be a sad, mournful colour.

The Harry Potter Wiki has 26 images related to Augurey.

From Fantastic Beasts and Where to Find Them: Illustrated Edition 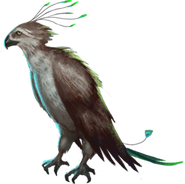 An Augurey as depicted in Harry Potter: Wizards Unite 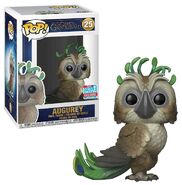 An Augurey as a POP! Vinyl 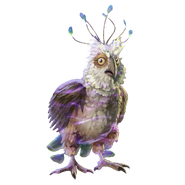 Baby Augurey as seen in Harry Potter: Wizards Unite
Add a photo to this gallery

Retrieved from "https://harrypotter.fandom.com/wiki/Augurey?oldid=1391961"
*Disclosure: Some of the links above are affiliate links, meaning, at no additional cost to you, Fandom will earn a commission if you click through and make a purchase. Community content is available under CC-BY-SA unless otherwise noted.