Austria is a landlocked country in Central Europe.[1] It is bordered by the Czech Republic and Germany to the north, Hungary and Slovakia to the east, Slovenia and Italy to the south, and Switzerland and Liechtenstein to the west.[1] Nurmengard Castle was found in the mountains of Austria.

Given the school's German name, it is possible that Austrian wizards and witches had the option to attend Durmstrang Institute.

The following creatures were native to the Austrian portion of the Alps:[2] 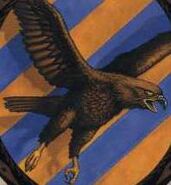 Percival Shacklehorn, a British wizard, went to the Austrian Alps in the hope of capturing a Graphorn.[2] During this expedition, a mountain troll snuck into his tent, and was rendered invisible when it broke a bottle of Invisibility Potion.[2] The Muggle monster hunter Laura Thorn was in the Alps searching for a Yeti at the same time.[2] She also wandered into Shacklehorn's tent, and, along with the mountain troll, was accidentally transported to the Leaky Cauldron in London.[2] Mathilda Grimblehawk and her partner were able to track down the loose mountain troll.[2]

The capital of Austria is Vienna.[1] Paul Stark, a Muggle luggage maker, had a workshop at Erdbergstrasse 35 in this city.[3]

Deutsch Deutsch Español Français
*Disclosure: Some of the links above are affiliate links, meaning, at no additional cost to you, Fandom will earn a commission if you click through and make a purchase. Community content is available under CC-BY-SA unless otherwise noted.
Advertisement