View source
watch 01:36
We're Getting Mutants in the MCU - The Loop
Do you like this video?
Play Sound

Black with a scarlet bat

Having won the British and Irish Quidditch League 27 times

The Ballycastle Bats were a Quidditch team located in Northern Ireland. They were the second most successful team in the British and Irish Quidditch League, having won the title twenty-seven times nearing the end of the 20th century.

Their robes were black with scarlet bat logos. Their mascot was Barny the Fruitbat, who was also featured in Butterbeer advertisements.[2] 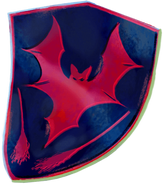 The uniform of this team

Deutsch Deutsch Español Français Italiano Nederlands Norsk Polski Português do Brasil Русский 中文
*Disclosure: Some of the links above are affiliate links, meaning, at no additional cost to you, Fandom will earn a commission if you click through and make a purchase. Community content is available under CC-BY-SA unless otherwise noted.
Advertisement