"The Barn Owl is common in Europe and has an acute sense of hearing."
—Advert at Eeylops Owl Emporium[src]

The Barn Owl is a species of owl, common in Europe, distinct for its acute sense of hearing.[2]

The barn owl is one of several species of owls sold at Eeylops Owl Emporium. One can purchase it for 10 Galleons.[3]

At least four barn owls were amongst the owls that delivered hate mail to Hermione Granger in February 1995 following the publication of the article "Harry Potter's Secret Heartache" in Witch Weekly.[7]

During the summer holidays of 1995, a barn owl delivered Harry Potter a letter from Arthur Weasley telling him that Albus Dumbledore was trying to sort things out with the British Ministry of Magic regarding his usage of underage magic and to not do any more magic or leave 4 Privet Drive.[8]

On 2 September of that year, Hermione received her copy of the morning's Daily Prophet from a barn owl.[9] 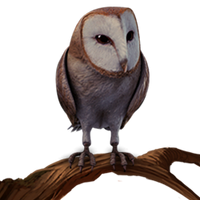 Retrieved from "https://harrypotter.fandom.com/wiki/Barn_owl?oldid=1239931"
Community content is available under CC-BY-SA unless otherwise noted.