Battle of the Seven Potters

Battle of the Seven Potters

Harry Potter's magical protection breaks at age seventeen, thus he needs to be transported to a safe location (in this case, The Burrow.)

"That's him, it's him, it's the real one!"
— A Death Eater calling out Harry Potter's location to Voldemort[src]

The battle occurred on 27 July, 1997, when several members of the Order of the Phoenix were ambushed by Death Eaters while removing Harry Potter from the home of his only relatives, the Dursley family.[2]

The battle proved to be one of many attempts on Harry Potter's life by Lord Voldemort.[2] The Order managed to get Harry to safety, but suffered the loss of their leader, Alastor Moody,[3] and Harry's owl, Hedwig, in the process.[2] George Weasley also lost an ear because of a curse sent by Severus Snape,[3] who originally sent his Sectumsempra curse at a Death Eater's wand arm.[4]

Harry Potter and the Dursleys

Yaxley: "My Lord, I have heard differently. Dawlish, the Auror, let slip that Potter will not be moved until the thirtieth, the night before the boy turns seventeen."
Severus Snape: "My source told me that there are plans to lay a false trail; this must be it. No doubt a Confundus Charm has been placed upon Dawlish… I assure you, Yaxley, the Auror Office will play no further part in the protection of Harry Potter."
— Death Eater meeting at Malfoy Manor during the height of the war[src]

After the murder of James and Lily Potter at the hands of Lord Voldemort, Harry Potter was left in the care of his maternal aunt, Petunia Dursley. Although she and her husband Vernon were reluctant to take Harry in, doing so sealed powerful blood magic that would protect Harry until his seventeenth birthday. Harry lived with the Dursleys at 4 Privet Drive in Little Whinging when he was not at Hogwarts.[5]

Voldemort learned of this protection, and thus sought to find and kill Harry when the Order of the Phoenix removed him as he came of age. By July 1997, there had been another break-out of Death Eaters from Azkaban and Voldemort had enough control over the Ministry of Magic to observe any Apparition, Portkey use, or Floo Network activity from the Dursleys' home, but the Order mistrusted the Ministry and made other plans, thus Voldemort was not privy to the whole plan and only part of it (namely, by using untraceable transport).[2]

Harry Potter: "But this is mad, there's no need —"
Alastor Moody: "No need! With You-Know-Who out there and half the Ministry on his side? Potter, if we're lucky he'll have swallowed the fake bait and he'll be planning to ambush you on the thirtieth, but he'd be mad not to have a Death Eater or two keeping an eye out, it's what I'd do. They might not be able to get at you or this house while your mother's charm holds, but it's about to break and they know the rough position of the place. Our only chance is to use decoys. Even You-Know-Who can't split himself into seven. So, Potter — some of your hair, if you please."
— Moody explaining the importance of using Polyjuice Potion[src]

In order to preserve his position as a trusted Death Eater, Severus Snape was forced to tell Voldemort the true date at which the Order planned to move Harry.[6] However, he placed a Confundus Charm on Order member Mundungus Fletcher so that the other wizard would suggest a plan to have six others disguise themselves as Harry through the use of Polyjuice Potion to act as decoys.[4]

The rest of the Order was unaware of this, as they believed Snape to be a traitor. However, they accepted the plan to have seven Harry Potters, each escorted by an Order member acting as a protector, and fly away from Little Whinging, as no other method of transportation was safe. Harry himself did not like the plan because it risked others’ lives, but was overruled.[2]

Immediately after the group of fourteen took off, they were ambushed by at least thirty Death Eaters, including Voldemort himself.[2] Harry and Hagrid were pursued by several Death Eaters, one of whom killed Harry's owl Hedwig while aiming for Hagrid. Hagrid used the motorbike's exhaust to knock one Death Eater off his broom and Harry shot as many spells as he could at them, most of them Stunning Spells. Harry's Stunning Spells collided with the curses the Death Eaters cast, making it appear as if fireworks were being set off. At one point, the side-car Harry was in began to break away from the bike, forcing Harry to use a Levitation Charm to remain in the air.

Harry struck one Death Eater with an Impediment Jinx and knocked a tooth from his mouth when dodging a curse. Once Hagrid lifted him up onto the bike, he blew the falling side-car up with a Blasting Curse, blasting a Death Eater off his broom. When he spotted Stan Shunpike, who was only acting under the Imperius Curse, Harry did not want to hurt him, and thus tried to disarm him. The Death Eaters considered this Harry's "trademark" spell, and thus broke off pursuit, knowing he was the real Harry. This was then confirmed by Harry's reaction to the murder of his owl, Hedwig, who came to protect him. Upon witnessing this, the pursuing Death Eater fell back to inform Voldemort.

Harry and Hagrid were then pursued by Voldemort himself, who was able to fly without support. Harry's wand, recognising Voldemort as an enemy as a result of Priori Incantatem two years before and acting by itself, sent a "spurt of golden fire" at Voldemort and defeated the wand Voldemort had borrowed from Lucius Malfoy. Before Voldemort could attack him again with Selwyn's wand, Harry and Hagrid passed through the magical protections around the home of Ted and Andromeda Tonks and crashed.[2]

Remus Lupin: "So what kept you? What happened?"
Nymphadora Tonks: "Bellatrix. She wants me quite as much as she wants Harry, Remus, she tried very hard to kill me. I just wish I'd got her, I owe Bellatrix. But we definitely injured Rodolphus... Then we got to Ron's Auntie Muriel's and we missed our Portkey and she was fussing over us —"
— Tonks recounting her and Ron's pursuit[src]

In the meantime, George Weasley had been injured by Snape's Sectumsempra curse, though Snape was truly aiming for another Death Eater who had their wand pointed at Remus' back. Bellatrix Lestrange had pursued her niece and Ron Weasley, who stunned a Death Eater while flying. Tonks also injured Rodolphus Lestrange while he and his wife attacked her and Ron. However, they were delayed and missed their Portkey from the home of Muriel to the Burrow.

Voldemort had first pursued "Mad-Eye" Moody and Mundungus Fletcher, believing that the real Harry would be with the formidable former Auror. Fletcher, however, Disapparated immediately upon seeing the danger and Moody was murdered by a Killing Curse sent by Voldemort for Fletcher (whom he believed to be the real Harry Potter). Voldemort then pursued Hermione Granger and Kingsley Shacklebolt, who were attacked by five Death Eaters; they injured at least two, including Travers, and may have killed another. Voldemort broke off pursuit when the real Harry was discovered.[3] The Order had banked on Moody and then Kingsley as the first two targets thinking Voldemort would assume the real Harry was with the most skilled members.

Fred Weasley: "What's wrong with him? Is his mind affected?"
George Weasley: "Saintlike. You see... I'm holy. Holey, Fred, geddit?"
Fred Weasley: "Pathetic. Pathetic! With the whole wide world of ear-related humour before you, you go for holey?"
— Fred and George after the latter's injury[src]

At the Tonks household, Ted repaired Harry's tooth, ribs, arm and leg while Andromeda fixed Hagrid up. However, Harry was still greatly hurt emotionally by the death of his beloved owl. They then took a Portkey to the Burrow, where Molly and Ginny Weasley were waiting. George Weasley and Remus Lupin arrived next, and Molly attempted to heal George's wound; he recovered, but his left ear could not be healed because the wound was caused by Dark magic.[3]

The injury was caused by Snape's Sectumsempra spell in order to stop the Death Eaters from hurting George (who he thought was Harry) and Lupin, but missed and hit George. Hermione and Kingsley then arrived, both unharmed, followed by Arthur and Fred Weasley, both concerned for George.[3]

After a bit of a wait, Ron and Tonks arrived much to the relief of Hermione and Remus, and Kingsley was forced to go back to his job guarding the Muggle Prime Minister. At last, Bill Weasley and Fleur Delacour arrived, bringing the sad news of Moody's death. The group discussed the possibility that they had been betrayed, but Harry expressed his trust in everyone. Nevertheless, this unexpected ambush made them all realise that they must adopt Moody's paranoid-based security, such as asking questions to confirm identities.[3]

After this battle, Harry was united with Ron and Hermione at the Burrow, where they were safe for a short period of time before going on the hunt for Voldemort's Horcruxes. They agreed amongst themselves to stay for Harry's seventeenth birthday party and for Bill Weasley and Fleur Delacour's wedding, and then to head off, despite Molly Weasley's numerous unsuccessful attempts to interrogate and dissuade them.

Ron transfigured the Weasley family ghoul to look like himself sick with Spattergroit as a cover for his absence, with the assistance of his father and Fred and George. Hermione packed supplies in a beaded bag upon which she cast an Undetectable Extension Charm, so that they could be ready to go in an instant, if necessary.[7]

Following his death, Alastor Moody's magical eye was found by Dolores Umbridge at some point. She used the eye to look out of her office at the Ministry of Magic in 1997. When Harry, Ron, and Hermione infiltrated the Ministry, Harry saw the eye and took it from Umbridge's office door. The absence of the "electric-blue eye" from the door alerted Ministry workers that there were intruders within the building, but the trio still escaped.[8] 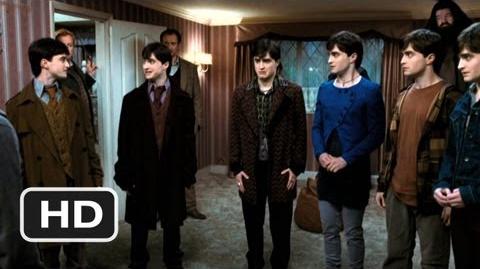 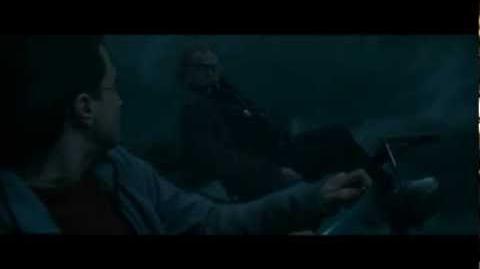 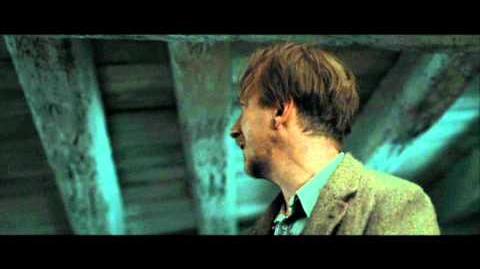 Deutsch Deutsch Español Français Italiano Polski Português do Brasil Русский
*Disclosure: Some of the links above are affiliate links, meaning, at no additional cost to you, Fandom will earn a commission if you click through and make a purchase. Community content is available under CC-BY-SA unless otherwise noted.
Advertisement