The Beauxbatons uniform was a set of clothing all students of Beauxbatons Academy of Magic were required to wear.[1] It consisted of light blue clothing made of silk, and as such, wasn't practical for weather colder than what is experienced in the Pyrenees.

When twelve students from Beauxbatons travelled to Hogwarts Castle, home to Hogwarts School of Witchcraft and Wizardry, to participate in the Triwizard Tournament, they felt very cold due to the difference in temperature between Scotland and the Pyrenees.[1] 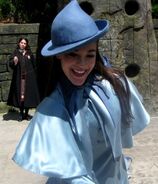 Retrieved from "https://harrypotter.fandom.com/wiki/Beauxbatons_uniform?oldid=1331927"
*Disclosure: Some of the links above are affiliate links, meaning, at no additional cost to you, Fandom will earn a commission if you click through and make a purchase. Community content is available under CC-BY-SA unless otherwise noted.