"She whipped out her wand, waved it, muttered something, and sent a jet of the same bluebell flames she had used on Snape at the plant. In a matter of seconds, the two boys felt it loosening its grip as it cringed away from the light and warmth."
—Hermione Granger using Bluebell Flames against the Devil's Snare[src]

Bluebell flames were bright blue in appearance and were waterproof.[5] Not as dangerous as real fire, these magical flames could be touched, penetrated and held without it burning the holder, though it was known to singe materials such as clothing and plants.[3] As such, it might be safely carried in small objects, such as a jar, without the object being damaged.[6] These unique flames could also be directed to a desired location by its caster, and return to its original position.

Hermione placing the Bluebell Flames in a jar

A jar of bluebell Flames 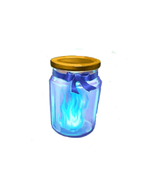 A jar of Bluebell Flames
Add a photo to this gallery

Retrieved from "https://harrypotter.fandom.com/wiki/Bluebell_Flames?oldid=1397885"
*Disclosure: Some of the links above are affiliate links, meaning, at no additional cost to you, Fandom will earn a commission if you click through and make a purchase. Community content is available under CC-BY-SA unless otherwise noted.