Brazil is the largest country in both South America and the Latin America region. Its capital city is Brasília.[1]

The history of magic in Brazil had distant origins, as was known from the discovery of magical ancient ruins in the Amazon rainforest beneath the thousand-year-old school of Castelobruxo.[2]

The Caxambu Style Borborygmus Potion was developed in Caxambu, Brazil.[3]

Newton Scamander travelled to Brazil at some point, as it is known he studied the Fire Slugs in the country's rainforests.[4]

In 1991, Harry Potter talked to a boa constrictor of Brazilian descent. When Harry freed the snake, it left saying: "Brazil, here I come ... Thanksss, amigo."[5]

In 1993, the yearly International Warlock Convention was held in Brazil. It was hosted by the Brazilian Ministry of Magic, which stated that it was "proud" to host the event.[6]

Brazil had a wizarding community of its own. The Amazon rainforest along with the municipalities of Caxambu, Manaus and Teresina may have had significant magical populations, as the Daily Prophet saw fit to include forecasts for them in its international weather section.[7]

The Brazilian Ministry of Magic[6] was the main governing body among the magical community of Brazil.

Castelobruxo, one of the eleven wizarding schools, was located in northern Brazil amid the Amazon rainforest. Young witches and wizards from across South America attended this school.[2] Castelobruxo was implied to be as old as Hogwarts, that is, over a thousand years.

William Weasley had a Brazilian pen-friend who attended Castelobruxo. When said pen-friend wanted him to go on exchange trip, Bill had to decline because his parents could not afford it. Unfortunately, his pen-friend got offended and sent Bill a cursed hat that made his ears shrivel up.[8]

The following creatures were native to Brazil: 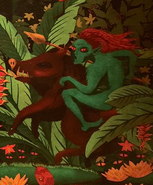 Deutsch Deutsch Español Français Nederlands Polski Português do Brasil Русский 中文
*Disclosure: Some of the links above are affiliate links, meaning, at no additional cost to you, Fandom will earn a commission if you click through and make a purchase. Community content is available under CC-BY-SA unless otherwise noted.
Advertisement