Unforgivable Truth was the name given to an event of the Calamity.[1] 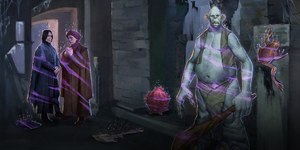 Harry and Hermione work together to create a surge based around the events of their first year at Hogwarts. Will their experiment to use the Calamity to restore Ron's memories prove sucessful?[1]

"I've just heard from Constance. Considering the sorts of Foundables she and the rest of the SOS Task Force are seeing, I'd say our first experiment was a success. We were able to combine our memories of our first year at Hogwarts to create one unified surge."
— Hermione Granger[src]

"You really think creating surges based on our adventures with Ron will restore his missing memories?"
— Harry Potter[src]

"Yes, and I'm confident our second experiment will prove it. You saw it yourself during the last surge, Harry. Every time we returned a Foundable, Ron was suddenly able to recall a related memory. That can't be a coincidence. The Calamity must be the key to restoring Ron's memories."
— Hermione Granger[src]

"Well, we've exhausted all our other options, so I sincerely hope you're right..."
— Harry Potter[src]

"Don't worry, Harry. If everything goes as predicted, more than one question will be answered by this surge's end."
— Hermione Granger[src]

"You were right, Hermione! Bits and pieces of Ron's memories really do come back to him when we return related Foundables. I'm not sure how that's possible, but I'm not complaining."
— Harry Potter[src]

"My theory is that the Calamity is functioning like a Pensieve. Rather than Obliviating Ron, Kit Gerrard, and Flavius Flint's memories, I believe The Unforgivable used the Calamity to snatch and lock them away. Surges provide a channel for some of the trapped memories to "escape"."
— Hermione Granger[src]

"So as long as we continue to use our shared memories to manipulate the Calamity, we should be able to return all of Ron's memories?"
— Harry Potter[src]

"Theoretically, yes. Though it will take time before he's completely back to himself. I wish we could simply force The Unforgivable to release them, but, well... I haven't even been able to uncover the identity of their mole yet.
I haven't exhausted my list of possible suspects yet, so I still have hope this will work. But we may want to start considering our next course of action should it not."
— Hermione Granger[src] 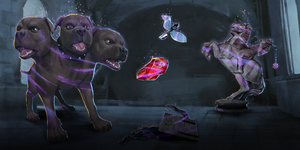 Hermione's secret mission to uncover the identity of The Unforgivable's mole continues. Will she root out the corruption? Or will The Unforgivable be one step ahead again?[1]

"I don't know why I didn't think of creating a surge together sooner. With our combined efforts, it was much easier to fend off The Unforgivable's attempt to steal control of the surge between waves."
— Hermione Granger[src]

"The Unforgivable must have realised that we know how to use the Calamity to restore Ron's memories. Should we be worried about that?"
— Harry Potter[src]

"Perhaps, though I'm more concerned that they've realised I'm using Veritaserum to attempt to expose their informant. I've heard plenty of confessions - including a few that I wish I hadn't - but no one's implicated themself so far."
— Hermione Granger[src]

"Perhaps there is no mole in the Ministry after all? We have plenty of circumstantial evidence, yes, but no definitive proof..."
— Harry Potter[src]

"No, someone close to us has definitely been leaking our plans to The Unforgivable. The only question is - have I yet to 'interview' the culprit? Or have they managed to resist the Veritaserum's effects? Well, I suppose we'll find out which is true soon enough, won't we?"
— Hermione Granger[src]

"Miss Granger, what a surprise. Can whatever you've come to discuss wait? I'm rather busy..."
— Gareth Greengrass[src]

"No, I'm afraid it can't. In fact, I'd say this talk is long overdue. Gareth, you're the mole who's been leaking our plans to The Unforgivable, aren't you?"
— Hermione Granger[src]

"Don't be ridiculous, I'm no mole. I'm one of The Unforgivable's most respected members.
What am I saying...? You...! You put Truth Potion in my tea, didn't you? But how? I never took my eyes off my cup!"
— Gareth Greengrass[src]

"I assumed a guarded wizard like you wouldn't. That's why I put it in your milk instead. Now it's my turn to get some answers..."
— Hermione Granger[src]