"Hagrid will be delighted. He was thrilled to see Buckbeak again. Incidentally, we have decided, in the interests of Buckbeak’s safety, to rechristen him ‘Witherwings’ for the time being, though I doubt that the Ministry would ever guess he is the hippogriff they once sentenced to death."
—Albus Dumbledore explaining Buckbeak's new name[src]

Buckbeak, later renamed Witherwings, was a male hippogriff. He lived with Rubeus Hagrid during Harry Potter's third year at Hogwarts, along with a few other hippogriffs. He was later unfairly sentenced to death, when he attacked Draco Malfoy after being taunted and provoked.[4] Buckbeak's death sentence was delivered from the Committee for the Disposal of Dangerous Creatures. Many of the members of this committee had been threatened by Draco's father, Lucius Malfoy, into voting for that verdict.[9]

With the help of Harry Potter, Hermione Granger, and her Time-Turner, Buckbeak escaped execution in 1994 and he came under the care of Sirius Black.[8] Sirius kept Buckbeak with him while on the run during the 1994–1995 school year, and later kept him in his mother's bedroom while in hiding at 12 Grimmauld Place.[10]

After Sirius's death, Buckbeak came to be owned by Harry Potter through Sirius's will, though Harry allowed him to live with Hagrid. He participated in two battles of the Second Wizarding War, most notably the Battle of Hogwarts.[6] He also showed great affection and loyalty toward Harry,[4] defending him whenever he was in danger.[7]

"Buckbeak flew him once around the paddock and then headed back to the ground; this was the bit Harry had been dreading; he leaned back as the smooth neck lowered, feeling he was going to slip off over the beak, then felt a heavy thud as the four ill-assorted feet hit the ground."
—Harry Potter takes a ride on Buckbeak[src]

In 1993, Rubeus Hagrid brought his first Care of Magical Creatures class to see and study Buckbeak, as well as other hippogriffs. Under Hagrid's direction, Harry was able to successfully approach Buckbeak and was even allowed to ride him for a short flight around the paddock.[4]

As hippogriffs are immensely proud creatures, Buckbeak was offended when Draco Malfoy taunted and provoked him. This resulted in him injuring the boy's arm.[4] Draco's father, Lucius Malfoy insisted that the Hippogriff be put to death.[9] Malfoy's influence in the Ministry of Magic led to his views being the majority vote, and the execution was to be carried out. Walden Macnair came to the Hogwarts as the employed executioner, and Buckbeak was tied in Hagrid's pumpkin patch to await his death.[11]

However, using a Time-Turner, Harry Potter and Hermione Granger rescued Buckbeak just prior to the execution.[8] Originally, they had heard the swish of an axe and assumed Buckbeak had been killed.[11] Later, as it became evident that Buckbeak had escaped, Macnair was frustrated upon realising Buckbeak had gone, and was happily dismissed by Dumbledore. Hermione and Harry took Buckbeak into the Forbidden Forest with them to remain hidden from sight, and Hermione tied him to a tree to stop him escaping. As Hermione and Harry realised Remus Lupin in his werewolf was entering the forest, they went inside Hagrid's hut to hide. Hermione stayed in the hut with Buckbeak, who was very happy to back home again. Harry then went off to the Black Lake to fight the Dementors with the Patronus Charm, in order to save his past self and Sirius Black. After this, Hermione took Buckbeak with her to see what was going on in the forest. Buckbeak was then used to fly to Filius Flitwick's office, in which Sirius was locked in, enabling Black to escape the Dementors and leave Hogwarts.[8]

" Tethered at the end of it, one end of his rope around a large rock, was Buckbeak the hippogriff. Half gray horse, half giant eagle, Buckbeak’s fierce orange eye flashed at the sight of them. All three of them bowed low to him, and after regarding them imperiously for a moment, Buckbeak bent his scaly front knees and allowed Hermione to rush forward and stroke his feathery neck."
—The trio meeting Buckbeak again in the Hogsmeade Cave[src]

Sirius Black then took possession of Buckbeak while both were on the run from the Ministry of Magic. Buckbeak stayed in Sirius's late mother's room at 12 Grimmauld Place.[10]

6 March, 1995 Buckbeak appeared with Sirius in the cave near Hogsmeade when he came to talk to Harry Potter, Hermione Granger, and Ron Weasley.[5]

18 June 1996, Kreacher injured Buckbeak with the encouragement of Bellatrix Lestrange and Narcissa Malfoy so that Sirius would be occupied with taking care of him when Harry tried to contact him. This led Harry to believe a false vision Lord Voldemort showed him, where Sirius was being tortured in the Department of Mysteries. The scene lured Harry and his friends to the Ministry, and set the stage for a battle. During the battle Sirius died, knocked through the Veil in the Death Chamber.[12]

Back in Hagrid's care

"Buckbeak had flown at Snape, who staggered backward as the razor-sharp claws slashed at him."
—Buckbeak joins Harry Potter's duel with Snape[src]

In July 1996, month after Sirius' death, Albus Dumbledore told Harry that according to Sirius' will, he was now the legal owner of Buckbeak, though Harry told Dumbledore that Buckbeak could continue living with Rubeus Hagrid. In order to protect the hippogriff's identity, Buckbeak was renamed "Witherwings" at this time.[2][3] He was greeted by Harry Potter in front of Hagrid's hut when the trio dropped in for a visit.[13] He was also present near the hut during Aragog's funeral.[14]

30 June 1997, Buckbeak joined Harry's duel with Severus Snape across the grounds, attacking Snape and driving him off, thus protecting Harry. Buckbeak survived the battle and was still in very good health.[7]

"Harry saw great winged creatures soaring the heads of Voldemort's giants, thestrals and Buckbeak the hippogriff scratching at their eyes while Grawp punched and pummelling them and now the wizards, defenders of Hogwarts and Death Eaters alike were being forced back into the castle."
—Buckbeak takes part in the second half of the final battle[src]

During the Battle of Hogwarts, Buckbeak, along with several Thestrals, were seen attacking Lord Voldemort's giant soldiers from the air while Grawp was hitting them. Buckbeak survived the battle.[6]

It is unknown what became of Buckbeak after the war, but it is possible that he still lives at Hagrid's hut, or else in the forest with the other hippogriffs. It is also likely that the death sentence on him was overturned as part of the wider reforms within the Ministry of Magic.

Buckbeak was a proud creature and at first he seemed to be fairly aggressive, attacking Draco Malfoy when the latter insulted him.[4] Despite his earlier signs of aggression, Buckbeak has been shown to be very loyal and protective of those who treat him with kindness and respect.[4][8][7]

Buckbeak was intelligent in his ability to recognise his past acquaintances, as he defended a cornered Harry from Severus Snape in 1997.[7] His loyalty towards Harry was undying, and further proven when he joined the Battle of Hogwarts in 1998 to fight.[6] 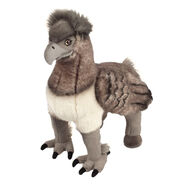 The Buckbeak plush at The Wizarding World of Harry Potter

Buckbeak as seen in Harry Potter: Puzzles & Spells
Add a photo to this gallery

The Harry Potter Wiki has 96 images related to Buckbeak.

Retrieved from "https://harrypotter.fandom.com/wiki/Buckbeak?oldid=1381850"
*Disclosure: Some of the links above are affiliate links, meaning, at no additional cost to you, Fandom will earn a commission if you click through and make a purchase. Community content is available under CC-BY-SA unless otherwise noted.