Burning of the Burrow

Part of The Second Wizarding War

Get Harry Potter out his safe house and capture him.

The Burrow is set on fire. Harry is alerted to the imminent danger he is in, as are the Weasleys.[1] The Burrow is destroyed.

"I can't believe how easy it is for them to get to you."
—The easy access Death Eaters have to Harry[src]

The Burning of the Burrow[2] was a skirmish of the Second Wizarding War that occurred on 25 December, 1996 outside the Weasley family home on the outskirts of Ottery St Catchpole.

Planning to lure Harry Potter out of his safe house and capture him, the Death Eaters attacked the Burrow on Christmas Day. While they succeeded in drawing Harry out into the open, they failed to capture him as several members of the Order of the Phoenix came to his aid. While all of the Burrow's inhabitants were outside (except the family ghoul) the Death Eaters burned the Burrow to the ground after failing to capture Harry Potter.

In the aftermath of the Return of the Dark Lord, the capture of Harry Potter became among the highest priorities for Lord Voldemort and the Death Eaters. Over the following year, they pursued a plan to capture Harry and the prophecy concerning him and Lord Voldemort. This plan resulted in the Battle of the Department of Mysteries and the death of Sirius Black at the hands of Bellatrix Lestrange. With Harry alive and having failed to obtain the Prophecy, the Death Eaters sought another way of capturing him.

For the Christmas holidays in 1996, Harry joined his friend Ron and his family at their home, the Burrow. While their usual companion, Hermione Granger, was not present due to a falling out with Ron, other family friends and members of the Order of the Phoenix namely, Nymphadora Tonks and Remus Lupin, had joined the family for Christmas supper.

By the time the assembled company had finished their Christmas supper, the Death Eaters were already hidden among the reeds in the marshland near The Burrow, spying on the house. As Remus Lupin and Nymphadora Tonks were leaving, Bellatrix Lestrange Apparated a few metres from the front door then encircled the house with a raging ring of fire. Harry Potter and Ginny Weasley watched the scene from an upper-story window. When he saw Lestrange fleeing into the marshland, Harry took off after her in an attempt to avenge the murder of his godfather, Sirius Black.

Ginny ran after Harry trying to stop him and offer him help against the attacking Death Eaters. The ring of fire closed behind her, attacking and holding back Lupin, Tonks, and Mr Weasley who had attempted to follow the pair into the reeds. As Harry tore after Bellatrix through the tall-grass, she taunted him with the memory of his deceased godfather. Suddenly, Bellatrix Disapparated, leaving Harry disoriented among the reeds and trying to determine where she disappeared too.

By this time, Ginny had lost her way, as well. Hearing a noise behind her, she looked to see if it was Harry she called his name, only to be approached by Fenrir Greyback. As she was about to be attacked, Harry emerged from behind her and tried to stun Greyback, but his spell was deflected with ease. Greyback then Disapparated into the surrounding tall-grass, where he and Bellatrix encircled the pair in order to confuse them. As the two Death Eaters heard the adults approaching, they started jinxing Harry and Ginny who deflected the spells.

Hearing the spells being cast ahead of them, Lupin, Tonks, and Mr Weasley joined Harry and Ginny and tried to protect them from the Death Eaters. After firing of another round of spells, largely outnumbered, Bellatrix and Greyback retreated. While retreating they went out of their way to set fire to the Burrow. The fire destroyed all the items in the Wesaley family home and ruined the rest of the Christmas holidays for all of those present, greatly upseting Mrs Weasley in the process.

After the incident the Burrow was rebuilt during the rest of Harry's sixth year.[1] The attack also helped Harry and the rest of the wizarding population realise how easy it was for Death Eaters to get him and that better protection was required wherever Harry intended to stay. 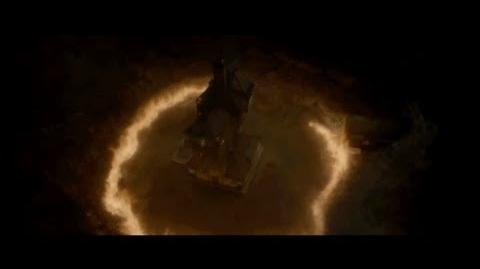 Retrieved from "https://harrypotter.fandom.com/wiki/Burning_of_the_Burrow?oldid=1302336"
*Disclosure: Some of the links above are affiliate links, meaning, at no additional cost to you, Fandom will earn a commission if you click through and make a purchase. Community content is available under CC-BY-SA unless otherwise noted.