Hogwarts School
A candle is a stick of wax with a wick in the middle, used to light an area.

Some magical candles can be lit by walking past them, or by waving a hand in front of them. Albus Dumbledore, Remus Lupin, and Rita Skeeter are three wizards known to have lit candles magically.

The Great Hall at Hogwarts was lit by thousands of floating candles. At Christmas time, advent ones are seen to be placed near the Head Table where the professors sit at meals. Nearly Headless Nick's Deathday party was lit by jet black candles with thin blue flames. Candles enchanted to burn without being consumed are also placed inside each suit of armour in the castle at Christmastime. 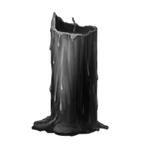 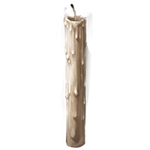 White wax candle.
Add a photo to this gallery

Retrieved from "https://harrypotter.fandom.com/wiki/Candle?oldid=1296818"
*Disclosure: Some of the links above are affiliate links, meaning, at no additional cost to you, Fandom will earn a commission if you click through and make a purchase. Community content is available under CC-BY-SA unless otherwise noted.