Hogwarts School of Witchcraft and Wizardry[2]

"Wizards, she says, must accept these thieves of their knowledge and magic. The dwindling of the pure-bloods is, says Professor Burbage, a most desirable circumstance... She would have us all mate with Muggles ... or, no doubt, werewolves ..."
—Lord Voldemort tormenting Charity Burbage[src]

Professor Charity Burbage (d. July, 1997) was a witch and the Professor of Muggle Studies at Hogwarts School of Witchcraft and Wizardry, after the departure of the wizard who formerly held the post. Her career lasted from 1993 to 1997.[2]

She believed that Muggles were not so different from wizards and witches, and used this viewpoint in her teaching. It would eventually lead to her death as Lord Voldemort murdered her personally for writing a Daily Prophet article about her views during the Second Wizarding War.[2]

Charity was born to Mr and Mrs Burbage[4] somewhere in Great Britain. Her parentage is unknown, but it is possible that she was half-blood or pure-blood.[3]

Burbage probably studied magic at Hogwarts School of Witchcraft and Wizardry. It is likely that she achieved high O.W.L. and N.E.W.T. marks in Muggle Studies, as she secured a job teaching the subject later.[2] She may have also studied Muggle Art and Muggle Music.

Career as a professor

"It'll be fascinating to learn about Muggles from a wizard's point of view."
—Hermione Granger awaiting Professor Burbage's class[src]

Burbage took up the post of Muggle Studies professor after a male teacher left. Her office was located on the first floor (indicated as where Hermione took her Muggle Studies exam). It was full of Muggle toys and instruments, suggesting that it was possibly used for Muggle Music classes as well. She also kept a Lumos Duo spellbook there.[7]

Her class was described as a "soft" option, as opposed to Minerva McGonagall's Transfiguration classes. However, Percy Weasley proposed that her classes were very useful for students who were planning careers in Muggle relations. She apparently gave quite a bit of homework, such as essays on why Muggles need electricity.[8]

Third-years Hermione Granger and Ernie Macmillan both took her class and found her teaching fascinating. However, Hermione dropped the class at the end of the year, feeling a need to have an easier schedule.[8]

"Severus! Help me!"
—Charity pleading for Snape to save her life at Malfoy Manor[src]

During the summer holidays of 1997, Burbage was abducted by Lord Voldemort and his Death Eaters. An official statement claimed that she had 'resigned,' although many who knew her were suspicious about her disappearance. She was suspended over a table at Malfoy Manor while the Death Eaters were having a meeting there. Voldemort accused her of polluting the minds of young witches and wizards with pro-muggle ideas. He vilified her Muggle-friendly beliefs, claiming that she wanted to encourage more magical people to "mate" with Muggles.[2]

Burbage, noticing that Severus Snape was among the Death Eaters, begged him to save her. This caused amusement among some of the Death Eaters present, such as Bellatrix Lestrange. However, as he was serving as a undercover agent and could not risk blowing his cover, he could do nothing. He sat and watched with mostly concealed remorse as his supposed master cruelly taunted her and then murdered her with the killing curse, afterwards feeding her corpse to Nagini.[2]

"Alecto, Amycus's sister, teaches Muggle Studies, which is compulsory for everyone. We've all got to listen to her explain how Muggles are like animals, stupid and dirty, and how they drive wizards into hiding by being vicious toward them, and how the natural order is being re-established. I got this one for asking her how much Muggle blood she and her brother have got."
—Neville Longbottom on Burbage's sucessor, Alecto Carrow[src]

No one knew of Burbage's whereabouts after her death. Sometime before 27 July, Charity Burbage's alleged resignation from Hogwarts School of Witchcraft and Wizardry was briefly mentioned of the front page of the Daily Prophet.[9] However, members of the Order of the Phoenix did not believe it, such as Molly Weasley, as they were unable to locate her anywhere after the summer.[10]

Sometime after the Fall of the Ministry of Magic, an editorial was published on the Daily Prophet disregarding Burbage's previous editorial and informing the public she was reported in hiding.[11]

On 1 September 1997, under the tenure of Headmaster Severus Snape, attendance of Muggle Studies class was made mandatory by the Death Eater-controlled Ministry of Magic, under professor Alecto Carrow.[12] It is unknown whether Burbage's true fate was ever uncovered and revealed to the wizarding world after the Second Wizarding War.

During the 2010s, Charity Burbage appeared as a Foundable during the Calamity. Volunteer members of the Statute of Secrecy Task Force were able to free her, allowing Charity to return to her original time.[13]

"Yes ... Professor Burbage taught the children of witches and wizards all about Muggles ... how they are not so different from us..."
—Voldemort condemning Burbage's pro-Muggle views[src]

Charity Burbage held very strong and passionate views in favour of the rights of Muggles and Muggle-borns. She held very tolerant attitudes towards Muggles, believing them to be fully equal to Wizardkind and that the decline of pure-bloods was beneficial to wizarding society, most likely based on the belief that it would lead to greater acceptance of Muggles among wizards and the decline of pure-blood supremacy.[2] She also had a highly deep and thorough knowledge of the Muggle world in general, including Muggle ways of living, science and technology. She also appeared to be a highly competent and talented teacher of her subject Muggle Studies whilst she was a Hogwarts Professor, as several students described her lessons as being fascinating, showing her to have been very devoted to her career and an expert in her field.[8]

During her employment at Hogwarts, she apparently considered herself to be friends with Severus Snape. She begged him to save her during the Death Eater meeting at Malfoy Manor in the summer of 1997.[2] Despite his apparent murder of Albus Dumbledore (unbeknownst to most people, Dumbledore had planned his death with Snape), she viewed him as a friend.[14] She may have suspected that the circumstances surrounding Dumbledore's "murder" were not what they appeared to be. However, it is also possible that she did not actually see Snape as a friend and was simply making a last ditch attempt to save herself by appealing to the only person in the room she had some semblance of a relationship with, having both been faculty members at Hogwarts.[2]

Unfortunately he could do nothing to help her, as he needed to pretend that he was truly loyal to Voldemort. Any attempt to save Charity would have resulted in both of them being killed. Nevertheless, he seemed to feel a level of remorse for it, not looking as glad as the rest of the Death Eaters when Charity was about to be killed.[2]

'Charity' is from the English word charity, ultimately derived from Late Latin caritas meaning "generous love", from Latin carus 'dear, beloved.' Caritas was in use as a Roman Christian name. The English name Charity came into use among the Puritans after the Protestant Reformation.

Charity Burbage as she appears in LEGO Harry Potter: Years 5-7 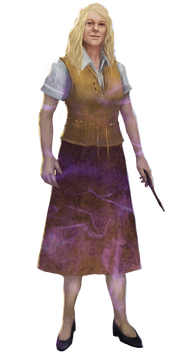 Professor Burbage as she appears in Harry Potter: Wizards Unite
Add a photo to this gallery

The Harry Potter Wiki has 20 images related to Charity Burbage.

Retrieved from "https://harrypotter.fandom.com/wiki/Charity_Burbage?oldid=1391368"
*Disclosure: Some of the links above are affiliate links, meaning, at no additional cost to you, Fandom will earn a commission if you click through and make a purchase. Community content is available under CC-BY-SA unless otherwise noted.