This article is about the subject taught in wizarding schools. You may be looking for the type of spells.

"I see Charms as a slightly lighter subject than Transfiguration which is very hard work. With Charms there would be a little more leeway for a little more personal creativity— "
—J. K. Rowling on the nature of charms work[src]

Charms is a core class and subject taught at Hogwarts School of Witchcraft and Wizardry and Ilvermorny School of Witchcraft and Wizardry. Unsurprisingly, it specialises in the teaching of charms. Even though mastering the science of charm-work is clearly essential to performing the greater part of magic, charm-work is seen as a "softer option" by some such as Augusta Longbottom who, incidentally, failed her Charms O.W.L..[1]

Professor Filius Flitwick taught Charms for many years. It was rumoured that his expertise with charm-work made him a duelling champion.

"They then spent over an hour revising Summoning Charms, which according to Professor Flitwick were bound to come up in their OWL, and he rounded off the lesson by setting them their largest ever amount of Charms homework."
—A fifth year Charms lesson, O.W.L. revision[src]

Charms is a required subject for all students in their first five years at Hogwarts School of Witchcraft and Wizardry. The spells learned in Charms class are taken from textbooks. Students are taught specific wand movements and proper pronunciation. Often students partner up in class to experiment on one another. Charms was Hermione Granger's favourite subject,[2] until she started Arithmancy as an elective in 1993.

In a student's fifth year they take the Ordinary Wizarding Level examinations. This exam contains a written portion and a practical portion. The written portion is made up of questions concerning the theory of charms and the practical is where students are judged upon the charms they can perform. Their O.W.L. scores decide what courses they'll be taking in their final years at Hogwarts. Only students who achieve a high O.W.L. score of either 'Outstanding' or 'Exceeds Expectations' may advance to N.E.W.T.-level.

Professor Flitwick was one of the kinder teachers at Hogwarts. Harry Potter, Ron Weasley, and Hermione Granger often enjoyed a "nice chat" in this class. This was the class where they used the Muffliato Charm as well.[3] Harry was on at least fairly good terms with Professor Flitwick, as the professor spoke with Harry about the "perfect" Summoning Charm he used in the Triwizard Tournament. Sometimes, Professor Flitwick, after trying and failing to get the class to concentrate, would allow the class to play games. One of these instances was just before the Yule Ball.[4]

An O.W.L. and a N.E.W.T. in Charms is compulsory for both Auror and Healer training, at either an "Exceeds Expectations" or "Outstanding" level.[5]

Charms classes are held in Class 99 in the South Tower and Classroom 2E along the Charms Corridor on the third floor, near the Third-floor corridor. Classroom 2E has three rows of desks, all facing the teacher's table, behind which sits a large upholstered chair with a high back. Two blackboards flank the teacher's table, and behind them is a small shelf with books and other objects, beneath a pair of windows.[6]

Time table for Gryffindor students first enrolled in Hogwarts School of Witchcraft and Wizardry during the 1991–1992 school year.

"Now, don't forget that nice wrist movement we've been practising! Swish and flick, remember, swish and flick. And saying the magic words properly is very important, too - never forget Wizard Baruffio, who said 's' instead of 'f' and found himself on the floor with a buffalo on his chest."
—Professor Flitwick teaching the Levitation Charm to his first years in 1991[src]

"Welcome to Charms class. Today we shall be learning the Skurge Charm."
—Professor Flitwick teaching second year Charms in 1992[src]

"What you must remember, is that these examinations may influence your futures for many years to come! If you have not already given serious thought to your careers, now is the time to do so. And in the meantime, I’m afraid, we shall be working harder than ever to ensure that you all do yourselves justice!"
—Professor Flitwick on the importance of fifth year Charms[src]

"Hermione was the only one who had managed to turn vinegar into wine; her glass flask was full of deep crimson liquid."
—A N.E.W.T.-level charms lesson[src]

The Standard Book of Spells, Grade 1 by Miranda Goshawk

The Standard Book of Spells, Grade 2 by Miranda Goshawk

The Standard Book of Spells, Grade 3 by Miranda Goshawk

The Standard Book of Spells, Grade 4 by Miranda Goshawk

The Standard Book of Spells, Grade 5 by Miranda Goshawk

The Standard Book of Spells, Grade 6 by Miranda Goshawk

The Standard Book of Spells, Grade 7 by Miranda Goshawk

The Charms O.W.L. contains both a written section and a practical where the students are judged on the charms they can perform.[31]

"a) Give the incantation and
b) describe the wand movement required to make objects fly."
—Question on the Charms O.W.L.[src]

Arthur Weasley (possibly)
Add a photo to this gallery 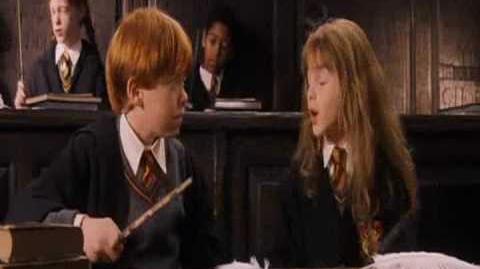 Retrieved from "https://harrypotter.fandom.com/wiki/Charms_(class)?oldid=1316011"
*Disclosure: Some of the links above are affiliate links, meaning, at no additional cost to you, Fandom will earn a commission if you click through and make a purchase. Community content is available under CC-BY-SA unless otherwise noted.