"He kept saying nobody in their right mind would rather study Knarls than Chimaeras."
—Hermione Granger on Rubeus Hagrid's love of these beasts[src]

A Chimaera was a type of hybrid animal and a violent magical beast native to Greece.[1] 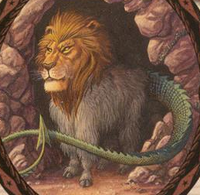 The Chimaera was a vicious, bloodthirsty beast with a lion's head, a goat's body and a dragon's tail.[1]

Because of their ferocity, Chimaeras were classified by the Ministry of Magic as XXXXX (extremely dangerous and lethal), and their eggs were classified as Class A Non-Tradeable Materials.[1]

There was only one recorded instance of a wizard killing a Chimaera, although the victor died from the exhaustion after killing it.[1]

Dai Llewellyn, the famous Caerphilly Catapults player, was killed by a Chimaera while on holiday in Mykonos, Greece.[2]

In the 1987–1988 school year in Hogwarts, Professor Silvanus Kettleburn repeatedly said that a Chimaera had escaped and was roaming the castle unleashed.[3] The Chimaera was still loose at the beginning of the following year.[4]. Jacob's sibling found her in the Forbidden Forest, but was unable to subdue her with magic. Liz Tuttle managed to calm her down.[5] In the 1988–1989 school year, Professor Kettleburn taught his fifth year Care of Magical Creatures about how to handle these beasts.[6]

In 1995, Rubeus Hagrid stated to Hermione Granger that it was difficult to get a Chimaera egg, causing Hermione to speculate that he had tried to get one, and wanted to use it as part of a Care of Magical Creatures lesson, while Hermione advised Hagrid better not to bring dangerous beasts to teach to the Hogwarts students, due to Dolores Umbridge's inspections.[7]

During the Battle of Hogwarts, when Vincent Crabbe cast Fiendfyre (cursed fire), flaming Chimaeras appeared out of it.[8]

The Harry Potter Wiki has 6 images related to Chimaera.

Retrieved from "https://harrypotter.fandom.com/wiki/Chimaera?oldid=1272567"
Community content is available under CC-BY-SA unless otherwise noted.