This article is about the collectible cards found when buying Chocolate Frogs. You may be looking for the Easter Egg cards that one can find at many difficult places in the games.

"Oh, of course, you wouldn't know — Chocolate Frogs have cards inside of them, you know, to collect — famous witches and wizards. I've got about five hundred, but I haven't got Agrippa or Ptolemy."
—Description of Chocolate Frogs[src]

Chocolate frogs are a very popular sweet made from chocolate in the form of a frog. They come with a collectible card of a famous witch or wizard in each pack.[1] The frogs are made of seventy percent Croakoa. Presumably, this substance is what allows them to act like an actual frog.[3]

Chocolate Frogs also come in a white chocolate variety. A popular game for Hogwarts students is to let a bunch of Chocolate Frogs hop around, and to grab the normal ones while avoiding the white ones.[4]

"What are these? They're not really frogs, are they?"
—Harry Potter's first encounter with Chocolate Frogs[src]

Hermione gave Harry a large box of Chocolate Frogs for Christmas that year.[5] Harry gave the last Chocolate Frog from this box to Neville Longbottom to reassure him after a run-in with Draco Malfoy, and Neville let Harry keep Albus Dumbledore card inside, unwittingly giving Harry, Ron, and Hermione the clue they needed to discover the identity of Nicolas Flamel.[6]

Harry received "loads" of Chocolate Frogs (among other gifts) from his admirers after he defeated Professor Quirrell, and he offered one to Rubeus Hagrid when he came to visit Harry in the hospital wing.[7]

In January 1994, after Harry's first attempt at summoning a Patronus, Professor Lupin gave him a Chocolate Frog to eat.[8]

Hagrid gave Harry a box of all his favourite sweets, including Chocolate Frogs, for Christmas in 1994,[9] and later that year, Harry guessed "Chocolate Frog" was the password to Dumbledore's office, though it was in fact Cockroach cluster.[10]

Harry gave Ron a Chocolate Frog to eat on the Hogwarts Express after his first prefects' meeting.[11] George Weasley helped himself to a Chocolate Frog from either Ron or Harry's presents on Christmas 1995.[12] Fred and George later sent Ron a "small mountain" of Chocolate Frogs after he was injured in the Battle of the Department of Mysteries. He shared them with Harry, Ginny, and Neville.[13]

Chocolate Frog Cards come in Chocolate Frog packages (along with a chocolate frog). Hogwarts students collect and trade them.[1] The faces on some of the cards are famous even to Muggles, although their magical abilities were not always recognised by the non-magical community.[17][18][19]

The Chocolate Frog collectible cards played an important role in Harry, Ron, and Hermione's first year at Hogwarts, as Dumbledore's card enabled them to ascertain the identity of Nicolas Flamel.[6] 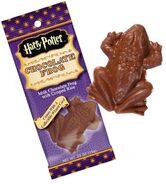 An alternate packaging for Chocolate frogs, found in sweet shops in the United States 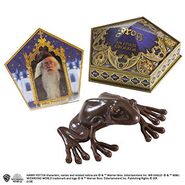 A Chocolate Frog as seen in Harry Potter: Puzzles & Spells

Retrieved from "https://harrypotter.fandom.com/wiki/Chocolate_Frog?oldid=1392150"
*Disclosure: Some of the links above are affiliate links, meaning, at no additional cost to you, Fandom will earn a commission if you click through and make a purchase. Community content is available under CC-BY-SA unless otherwise noted.