The Circus Arcanus was a travelling wizarding circus and freak show owned by Skender that boasted the "world's most complete congress of human oddities". It consisted of a daily street parade, which the organisers promised was "worth coming miles to see", and would amuse both young and old. The circus opened every evening on Thursday and Saturday. Adult tickets costed five bezants while infant tickets costed two bezants.[4]

The Circus Arcanus was slated to travel to somewhere in Europe after its stop in New York.[4] They boarded the SS. ONDINE which headed to Europe. In 1927, the circus performed for the very first time in France on Rue Claudel and Rue Girardon for only two weeks, and was attended by many of those in the wizarding communities.[5][6]

During the 2020s, part of the circus performers appeared as the Foundables during the Calamity. Volunteer members of the Statute of Secrecy Task Force were able to free them and returned to their original time.[7] 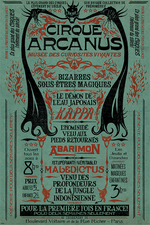 "I'd much rather be one of the circus non-beast performers. At least that fellow could get out and stretch his legs among the crowd..."
"I'm not so sure about that, Constance. From what I've learned, some of the performers may have been there against their will."
— Dialogue between Constance Pickering and Harry Potter[src]

The Harry Potter Wiki has 18 images related to Circus Arcanus.

Deutsch Deutsch Español Français 中文
*Disclosure: Some of the links above are affiliate links, meaning, at no additional cost to you, Fandom will earn a commission if you click through and make a purchase. Community content is available under CC-BY-SA unless otherwise noted.
Advertisement