"Ron passed the bag to Griphook and the goblin pulled out a number of small metal instruments that when shaken made a loud ringing noise like miniature hammers on anvils."
— Description[src]

Clankers,[1] also known as Goblin Noise Makers,[2] were magical items which made a loud noise when shaken, which were used in Gringotts Wizarding Bank. They were small objects kept in leather bags.[1]

They were used in high-security Gringotts vaults to ward off the dragons guarding them. The dragons associate the sound of the Clankers with pain and so flee the vault that they are guarding when they hear the sound. The creatures are "trained" to expect torment whenever they hear the sounds produced by these devices, causing them to retreat from the source. They are used by the goblin employees at Gringotts in order to access certain vaults.[1]

In 1998, Harry Potter, Ron Weasley, Hermione Granger, Griphook, and Bogrod (who was Imperiused at the time) used the Clankers to ward off the dragon guarding the Lestrange Vault, in order to get to the Horcrux inside.[1] Hermione Granger personally considered the use of clankers to control dragons to be "barbaric".[3] 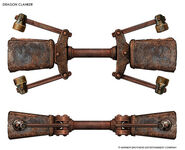 Other types of clanker 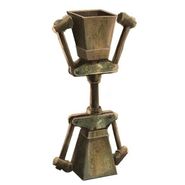 Deutsch Español Français Polski Русский
*Disclosure: Some of the links above are affiliate links, meaning, at no additional cost to you, Fandom will earn a commission if you click through and make a purchase. Community content is available under CC-BY-SA unless otherwise noted.