Harry Potter: "But there aren't wild dragons in Britain?"
Ron Weasley: "Of course there are. Common Welsh Green and Hebridean Blacks. The Ministry of Magic has a job hushing them up, I can tell you. Our lot have to keep putting spells on Muggles who’ve spotted them, to make them forget."
— Dragons indigenous to Great Britain[src]

The Common Welsh Green, or just Welsh Green, is a dragon native to Wales. It nests in the higher mountain regions where a reservation has been set up for it. It is a green dragon with a distinctive, musical roar.[1]

It is possible that a young Common Welsh Green may have been the actual cause of the Great Fire of London.[2]

The Ilfracombe Incident occurred in 1932, when a rogue Common Welsh Green dragon attacked a group of sunbathers at Ilfracombe, in Devon, England. The attack was thwarted by the Toke wizarding family, who proceeded to cast the largest group of Memory Charms seen in the twentieth century. The Toke family were subsequently awarded the Order of Merlin First Class, for their heroism and quick thinking.[1]

There existed a Common Welsh Green at the Magical Creatures Reserve during the 1980s. Jacob's sibling and Penny Haywood bonded with it and collected dragon dung for fertiliser.[3]

Fleur Delacour faced this breed of dragon for the First Task of the Triwizard Tournament in 1994. She enchanted the Creature into a magical slumber to retrieve her golden egg.[4]

This dragon is a relatively subdued breed (except for the rare exception of the Ilfracombe Incident). It prefers to prey mainly on sheep and other small mammals and to avoid human contact altogether. The Welsh Green's roar is rather distinctive and somewhat melodious and it issues its fire in narrow jets. The eggs of the Common Welsh Green are earthy brown, flecked with green.[1] 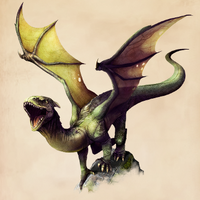 "If Charlie was here, he'd know how to deal with this."
— Ron on Charlie's skills with dragons[src]

Retrieved from "https://harrypotter.fandom.com/wiki/Common_Welsh_Green?oldid=1427128"
*Disclosure: Some of the links above are affiliate links, meaning, at no additional cost to you, Fandom will earn a commission if you click through and make a purchase. Community content is available under CC-BY-SA unless otherwise noted.