Courtroom Ten was one of the Ministry of Magic courtrooms on Level Ten, one floor below the Department of Mysteries. It was used by the Council of Magical Law and the Wizengamot, and has held four known hearings.

The 1981 hearings in Courtroom Ten

After Lord Voldmort's fall in 1981, then Head of the Department of Magical Law Enforcement, Barty Crouch Snr, with help of Alastor "Mad-Eye" Moody, rounded up a number of accused Death Eaters, including Igor Karkaroff, Ludo Bagman, Bellatrix, Rodolphus, and Rabastan Lestrange, and even Crouch's son of the same name, to be tried and sent to Azkaban.

Karkaroff: "You must understand that He-Who-Must-Not-Be-Named operated always in the greatest secrecy…we never knew the names of every one of our fellows — He alone knew exactly who we all were —"
Mad-Eye: "Which was a wise move, wasn't it, as it prevented someone like you, Karkaroff, from turning all of them in."
— Karkaroff turns in his fellow Death Eaters[src]

Mad-Eye captured Igor Karkaroff some time after 1981, and the Death Eater was sent to Azkaban, until Karkaroff gave up the names of a number of his fellow Death Eaters in exchange for a lighter sentence. He mentioned the names of Antonin Dolohov, Evan Rosier, Travers, Mulciber, and Severus Snape, all of whom seemed to have already either been killed, captured, or defected, until he called the name of Augustus Rookwood. Rookwood was an Unspeakable, and a double-agent, spying on the Ministry for Voldemort. This was news to the Ministry, but Karkaroff was sent back to Azkaban, pending a review into Rockwood's case; when Karkaroff's allegations proved true, he was released, and went on to take the position of Headmaster of Durmstrang Institute.

Some time after the First Wizarding War, Ludovic "Ludo" Bagman was put on trial for passing information to Death Eater double-agent, Augustus Rookwood. According to Bagman, he did not know that Rookwood was a Death Eater, stating that Rookwood was an old friend of his father. Rookwood had persuaded Bagman to give him information in return with promises of a future career in the Ministry, and Bagman had obliged, fully believing the Rockwood was working only for the Ministry. Much to Crouch's disappointment, Bagman was cleared of all charges. Bagman eventually became Head of the Department of Magical Games and Sports.

"The Dark Lord will rise again, Crouch! Throw us in Azkaban; we will wait! He will rise again and will come for us, he will reward us beyond any of his other supporters! We alone were faithful! We alone tried to find him!"
—Bellatrix at her trial[src]

Some time in 1981, Bellatrix, Rodolphus, and Rabastan Lestrange, and Barty Crouch Jr tortured the Aurors Frank and Alice Longbottom for information pertaining to Voldemort's location. The Longbottoms were tortured to insanity and permanently incapacitated at St Mungo's Hospital for Magical Maladies and Injuries, and the Death Eaters responsible were caught and put on trial.

All four were found guilty and sentenced to life in prison; due to this attack being one of the most vile acts within history, the entire court was cheering viciously on Crouch's decision. Upon hearing the sentence, Crouch Jr attempted to deny his involvement with Death Eaters, pleading for his father's mercy, to which the senior Bartemius Crouch replied, "you're no son of mine," and sent him to Azkaban with the Lestranges. As they were being carted off, Bellatrix declared her unwavering loyalty to Voldemort, as well as her belief that he would return for her family and Crouch; indeed, all four Death Eaters had been freed with the Dark Lord's help by 1996, though Barty Crouch Jr had already been smuggled out of Azkaban with his father's help by 1982, and was later freed from his father's Imperius Curse by Voldemort in 1994.

Disciplinary hearing of Harry Potter in 1995

Starting in 1995, the Ministry ran a smear campaign again Harry Potter and Albus Dumbledore. Senior Undersecretary to the Minister for Magic, Dolores Umbridge, sent two Dementors to Little Whinging in an attempt to silence Harry from continually contradicting the Ministry's official position denying the return of Lord Voldemort. Harry was able use the Patronus Charm to ward of the Dementors before they were able to perform the Kiss on him, or his cousin, Dudley Dursley. Harry was initially expelled, but, at Dumbledore's insistence, was given a formal hearing. The time and location of the hearing were changed at the last minute, in the hopes of causing Harry to miss it, but with the help of Arthur Weasley and a Ministry employee named Perkins, Harry managed to get to the hearing just a few minutes late. Cornelius Fudge, who made few attempts to disguise his agenda, threatened him with expulsion from Hogwarts, but Harry was exonerated with the help of Albus Dumbledore as his defence, the testimony of Arabella Figg, and the impartiality of Amelia Bones and various other members of the Wizengamot. 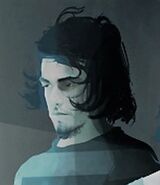 Harry Potter, accused of performing underage magic in front of Dudley Dursley, his Muggle cousin.
Add a photo to this gallery

The room was square with benches rising in levels along each wall.[1] It was made by black stone and lit by torches.[1] The room held at least 200 people,[1] including 50 at the far wall which had the highest rising benches.[2] At least two doors led to the room, one opposite the high benches which led to the dungeons outside,[2] and one in the corner from which the accused was brought in.[1] In the centre of the room was a chair for the defendant, with chains on the armrests that would bind down whoever sat in it;[1] During Harry's disciplinary hearing, the chains clinked threateningly, but did not bind him.[2]

Retrieved from "https://harrypotter.fandom.com/wiki/Courtroom_Ten?oldid=1328612"
*Disclosure: Some of the links above are affiliate links, meaning, at no additional cost to you, Fandom will earn a commission if you click through and make a purchase. Community content is available under CC-BY-SA unless otherwise noted.