Party held to remembering the death of said ghost[1]

"The living see a Deathday as the day someone died, but ghosts see it as the day they started a new chapter."
— Nearly Headless Nick[src]

A Deathday Party was a celebration thrown by ghosts to commemorate the anniversary of their death.[1]

What seemed to be a typical Deathday Party entailed a candlelit dinner of rancid, mouldy food, the smell of which would cause a normal living creature to gag. The reason for this was apparently the claim that a ghost could "almost taste" seriously spoiled food.[1]

Deathday Parties seemed to the living to be rather gloomy affairs.

Harry Potter, Ron Weasley, and Hermione Granger attended Sir Nicholas's 500th Deathday Party in 1992. Sir Nicholas was deeply touched that the three students put in an appearance, in part because it gave him a certain status in the eyes of his fellow deceased. The only people normally invited to a Deathday Party were no longer living, as noted on the occasion above by Hermione Granger.[1]

Sir Nicholas intended to threw a Deathday Party in 2009 as well. This time, he hired a doorman troll who would attack anyone uninvited under his order, and wanted to make sure all portraits in the Castle would attend.[3] 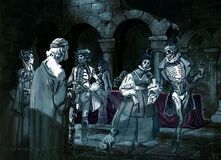 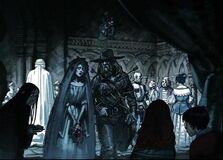 Deutsch Français Русский
*Disclosure: Some of the links above are affiliate links, meaning, at no additional cost to you, Fandom will earn a commission if you click through and make a purchase. Community content is available under CC-BY-SA unless otherwise noted.
Advertisement