"Dittany is a powerful healing herb and restorative and may be eaten raw to cure shallow wounds."
—Phyllida Spore, One Thousand Magical Herbs and Fungi[src]

Dittany is a magical plant used in potion-making. It is a powerful healing herb and restorative. Its use makes fresh skin grow over a wound and after application the wound seems several days old.[2]

Dittany is one of the plants found in One Thousand Magical Herbs and Fungi.[3]

"Greenish smoke billowed upward and when it has cleared, Harry saw that the bleeding had stopped. The Wound now looked several days old; new skin stretched over what had been open flesh. "
—The fast effect of Dittany[src]

Dittany is a healing and restorative herb, one of the plants found in One Thousand Magical Herbs and Fungi.[3] In addition to Dittany's essence being applied topically, the raw plant can be consumed to heal shallow to moderate wounds.[4]

If used in a mixture with silver it can cure werewolf bites. It will prevent the victim from bleeding to death from the bite, but not cure them of lycanthropy.[5] Shredded Dittany is an ingredient in the creation of the Wiggenweld Potion. Also known as Burning Bush, it sometimes releases flammable vapours.[1] A sick baby may be cured with the application of dittany.[6] Dittany can also be used to heal Doxy bites.

"There may be a certain amount of scarring, but if you take dittany immediately we might avoid even that...."
—Healing wounds, received from a curse[src]

Harry Potter researched dittany in One Thousand Magical Herbs and Fungi during his First Year as part of his Herbology homework during the 1991–1992 school year.[3]

In 1997, Severus Snape suggested that Draco Malfoy use it after Harry Potter's attack on him using Sectumsempra, saying it may prevent any lasting scarring if taken immediately.[7]

Later that year, Hermione Granger used Essence of Dittany to heal Ron Weasley's arm when he splinched it Disapparating soon after the trio's escape from the British Ministry of Magic in 1997.[2] She used it again to heal the snake bite Harry received on his arm from Nagini after they were attacked in Godric's Hollow,[8] and once more following the Break-in of Gringotts, to heal the burns they had received from the burning treasure contained with the Lestrange Vault.[9]

Dittany might be quite rare because Hermione was only able to obtain a small bottle of it for her, Harry and Ron's travels. Alternatively, as only small amounts were needed to heal the various wounds the trio acquire, perhaps a little goes a long way. Essence of Dittany is described as a brown liquid.[2]

Mathilda Grimblehawk's partner used dittany to heal wounds on a Mountain Troll that was mistakenly transported from the Alps to London.[10]

During the Calamity which affected the Wizarding world in the 2010s, volunteer members of the Statute of Secrecy Task Force frequently collected and used Dittany as a potion ingredient, particularly in the brewing of the Healing Potion.[11]

An illustration of dittany in Magical Drafts and Potions 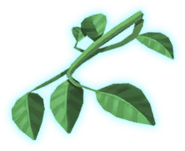 A piece of Dittany 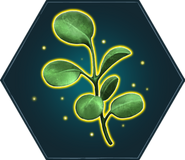 A clove of Dittany
Add a photo to this gallery

'Dittany' comes from the Ancient Greek δίκταμνον, supposedly Δικτή, meaning Dicte. Dicte is a mountain in Crete, the plant grew on.

Retrieved from "https://harrypotter.fandom.com/wiki/Dittany?oldid=1398864"
*Disclosure: Some of the links above are affiliate links, meaning, at no additional cost to you, Fandom will earn a commission if you click through and make a purchase. Community content is available under CC-BY-SA unless otherwise noted.