"These are my fellow Slytherins: Crabbe and Goyle."
—Malfoy introducing his cronies, which were the first members of the gang[src]

Draco Malfoy's gang[2] was a group of Slytherins who were often the children of Death Eaters, and/or Voldemort sympathisers or Death Eaters themselves. Most of them hung around Draco Malfoy, the son of a well-known Death Eater and wealthy pure-blood, Lucius Malfoy. Most of the members were known pure-bloods, using their status in order to assert their dominance as wizards. At least Crabbe and Gregory's fathers were known Death Eaters as well. That may be the reason they knew each other so well, seeing as Draco made friends with them shortly after meeting in their first year at Hogwarts.

The gang generally used their abilities and statuses to bully and terrorise the other students of different houses at Hogwarts, especially the younger students. Draco and his gang frequently antagonised Harry Potter and his friends, and Malfoy also used his position as prefect to bully some first years when he got the power in his fifth year. Their main target of hate are Muggle-borns and Blood traitors alike.

Draco Malfoy: "Oh, this is Crabbe and this is Goyle, and my name's Malfoy, Draco Malfoy. [...] You'll soon find out some wizarding families are much better than others, Potter. You don't want to go making friends with the wrong sort. I can help you there."
Harry Potter: "I think I can tell who the wrong sort are for myself, thanks."
Draco Malfoy: "I'd be careful if I were you, Potter. Unless you're a bit politer you'll go the same way as your parents. They didn't know what was good for them, either. You hang around with riffraff like the Weasleys and that Hagrid, and it'll rub off on you."
— Draco introducing himself to Harry Potter on the Hogwarts Express in 1991.[src]

Draco Malfoy showed up on the Hogwarts Express in September of 1991 with Vincent Crabbe and Gregory Goyle in tow. The length of their acquaintance prior to that time is unknown, but this was the start of Draco's gang while at Hogwarts. From the beginning, Draco antagonised Harry Potter. This worsened when Harry was seen in the company of Ronald Weasley (whom Draco was told by his father his family were 'blood traitors'), and later was seen with Hermione Granger (who was Muggle-born). Another instance of the gang bullying Harry and Ron, was when Harry was challenged to a duel by Draco, which Harry went to; Draco alerted Argus Filch that he'd overheard people planning to meet at the place where he'd set up the duel, and Filch almost caught Harry and Ron (and Neville Longbottom and Hermione, who'd tagged along). Future members of the gang - specifically Pansy Parkinson and Blaise Zabini - were are also sorted into Slytherin House alongside Draco.

Lucius Malfoy: "I hope my son will amount to more than a thief or a plunderer, Borgin. Though if his grades don't pick up, that may indeed be all he is fit for - "
Draco Malfoy: "It's not my fault. The teachers all have favourites, that Hermione Granger - "
Lucius Malfoy: "I would have thought you'd be ashamed that a girl of no wizard family beat you in every exam."
— Draco and his father talking in Borgin and Burke's in 1992.[src]

In 1992, Draco Malfoy joined the Slytherin Quidditch team as Seeker (by buying his way in), which led to more bullying of Harry Potter and friends by his gang. Later in the year, Harry Potter and Ron Weasley used Polyjuice Potion to impersonate two of the gang, Vincent Crabbe and Gregory Goyle, to discover if Draco Malfoy was the Heir of Slytherin.

In 1993, during the Gryffindor Quidditch match against Ravenclaw, Draco's gang antagonised Harry Potter by pretending there was a Dementor behind him. While at lessons for Care for Magical Creatures, when Malfoy was injured by a Hippogriff, Pansy Parkinson criticised Rubeus Hagrid, who had been teaching the class. He was hit by Hermione after laughing at Hagrid and calling her a mudblood, and ran away with Crabbe and Goyle in tow.

In 1995, at the beginning of the school year, Pansy Parkinson and Draco Malfoy become Slytherin Prefects. Vincent Crabbe and Gregory Goyle join the Slytherin Quidditch team as Beaters. Later, under Dolores Umbridge's control of Hogwarts, many in the gang were appointed members of the Inquisitorial Squad and given powers to dock points beyond those of Prefects. Malfoy's gang was very loyal to Umbridge. This year Malfoy was also seen in the company of Theodore Nott, a small, weedy boy who was also the son of a Death Eater.

In 1996, Harry Potter spied on Malfoy's gang on the Hogwarts Express using his invisibility cloak to see if Malfoy was a Death Eater as he suspected. It is also revealed that Pansy Parkinson has feelings for Malfoy, as his head was in her lap and she was stroking his hair. Though it is unknown if he reciprocates, it is likely because of the fact that he didn't pull away when she stroked his head. The gang unknowingly helps Malfoy to kill Dumbledore (they know they're helping him, but not what he's trying to accomplish). Crabbe and Goyle, using Polyjuice Potion, also stood watch outside the Room of Requirement while Draco attempted to repair the Vanishing Cabinet inside. Although Nott was again seen in Draco's company, this time in Horace Slughorn's Potions class, he remains outside of the gang, probably of his own free will. Despite the gang still assisting Draco to their full power, Draco himself started to distant himself from them, not telling them anything.

Throughout most of 1997-1998 school year, Draco Malfoy was separated from his gang, following the events at the top of the Astronomy Tower at the end of the previous year. He and his family out of favour with Lord Voldemort, he was put to ill use by the Dark Lord, forced to torture others who had earned Voldemort's disfavour via the Cruciatus Curse. Meanwhile, the members of his gang attended Hogwarts, receiving preferential treatment both for being Pure-bloods and members of Slytherin House. Some of the gang were appointed by the Carrows to use the Cruciatus Curse to punish misbehaving students. Just prior to the Battle of Hogwarts, Pansy Parkinson was held at wand-point by almost the entirety of the Gryffindors, Hufflepuffs, and Ravenclaws when she suggested turning Harry over to Voldemort. During the Battle of Hogwarts, Draco Malfoy returned to Hogwarts as part of the attacking group and reunited with Vincent Crabbe and Gregory Goyle. The group attempted to ambush Harry Potter in the Room of Requirement. Crabbe died when he could not control the Fiendfyre he conjured, while Draco pulled an unconscious Goyle to safety high up on a stack of desks to avoid the flames. They were both rescued by Harry, Ron, and Hermione using broomsticks. In the aftermath of the war, Draco escaped punishment by the Ministry of Magic thanks in part to Harry's testimony about his innocence in Albus Dumbledore's death and because of his mother, Narcissa Malfoy's actions in lying to the Dark Lord about Potter's death.

Nineteen years after the end of the war, Draco Malfoy had married Astoria Greengrass, and was seen escorting his son, Scorpius Malfoy, onto the Hogwarts Express as the boy left for his first year at school. By then, Draco and Harry had set aside their animosity towards each other. It is unknown if Draco and/or Astoria still spoke with the rest of the gang. But it is unlikely that they did, seeing as Draco turned against the Death Eaters completely.

Draco admitted to Harry and Ginny Potter that he always envied Harry's friendship with Ron and Hermione, while Draco himself had little in common with Vincent and Gregory, aside from their prejudice that Draco alone grew out of. Their thuggish and unintelligent behaviours made them very unreliable at best. Coupled with Crabbe's deranged attack that costed his own life and nearly took the rest of theirs, Malfoy lost all respect he may have had for him, while also ending his relationship with Goyle, who proved himself as cruel and sadistic as Crabbe was during the year that Voldemort took over. Draco also ceased his relationship with Pansy Parkinson, who was his girlfriend during their years at school, and instead he married Astoria.

Harry Potter was in the same year as most of Draco Malfoy's gang. Harry, being a Gryffindor, was despised by the gang of Slytherins and was the target of much of their taunts and bullying. Draco Malfoy's gang often bullied Harry Potter near upcoming Quidditch games in an attempt to make him nervous. As the years went by, however, Harry became used to the teasing and often made amusing comebacks. This seemed to change around their sixth year, as Draco's mission made him more stressed out, and he lost focus on his usual bullying and abuse of power. By the next year, Draco finally came to a better relationship with Harry, though far from a true friendship. Crabbe, on the other hand, had turned from bully to outright murderer, as he attempted to massacre Harry and his friends. 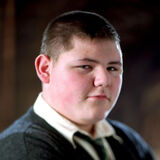 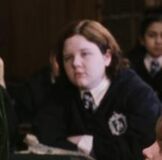 Millicent Bulstrode
Add a photo to this gallery

Graham Montague
Add a photo to this gallery