Part of the Return of Lord Voldemort

Lord Voldemort needs Harry Potter's blood for his rebirth and will kill him at the end.[1]

"It is NOT a lie! I saw him! I fought him!"
— Harry to Dolores Umbridge about the duel[src]

A duel between Harry Potter and Lord Voldemort took place at the start of the Second Wizarding War on 24 June, 1995 in the graveyard in Little Hangleton following Voldemort's rebirth.[1]

Harry and Voldemort's wands connected in Priori Incantatem, and while Harry managed to escape physically unscathed (with the exception of his arm slit open) with the body of Cedric Diggory, the emotional toll of the traumatic experience of watching a classmate murdered, his arm bleeding, Wormtail slicing off his own hand, and Voldemort be reborn, was great.[1]

"The Dark Lord will rise again, Crouch! Throw us into Azkaban; we will wait! He will rise again and will come for us, he will reward us beyond any of his other supporters! We alone were faithful! We alone tried to find him!"
— Bellatrix Lestrange boasting at her trial[src]

In the decades prior to his downfall in 1981, Lord Voldemort created several Horcruxes to ensure himself immortality.[2] These protected him on that fateful night in 1981, when he was struck by his rebounding Killing Curse. The shard of his soul that remained in his body was driven out of it and forced to exist in a spectral form for nearly fourteen years.

He travelled to a secluded forest in Albania, where decades earlier he had found Rowena Ravenclaw's Diadem, and hid there waiting to be found by his servants. Though none came, he was able to convince Quirinus Quirrell to return with him to Britain in 1991. When their attempts to steal the Philosopher's Stone were thwarted by Harry Potter, he returned to Albania believing that he would never return to power.[3]

Finally, in 1994, Voldemort's whereabouts were discovered by one of his servants. Peter Pettigrew, also known as Wormtail, had betrayed the Potters to Voldemort fourteen years previous, and framed Sirius Black for the crime. Those many years, he had hidden in his Animagus form as a rat known as Scabbers. After he was exposed on 6 June, he fled for the safety of his master's protection. Along the way, he manipulated Bertha Jorkins into joining him, and brought her before the Dark Lord. From her, Voldemort learned of the Triwizard Tournament and of Bartemius Crouch Jnr, and concocted a plan to restore his physical form and reunite with his Death Eaters.[4]

"I have my reasons for using the boy, as I have already explained to you, and I will use no other. I have waited thirteen years. A few more months will make no difference. As for the protection surrounding the boy, I believe my plan will be effective. All that is needed is a little courage from you, Wormtail — courage you will find, unless you wish to feel the full extent of Lord Voldemort's wrath —"
— Lord Voldemort explaining to Peter Pettigrew his need to kill Harry Potter[src]

Lord Voldemort planned to use Harry Potter's blood as part of a dark potion that would return him to his body, assuming correctly that the use of Potter's blood would override the protection afforded to Harry by his mother's sacrifice, and allow Voldemort to touch Harry without experiencing excruciating pain.[3]

On Voldemort's orders, Bartemius Crouch Jnr, who had been recently freed of his father's Imperius Curse, kidnapped Alastor Moody and took his place as temporary Defence Against the Dark Arts professor at Hogwarts School of Witchcraft and Wizardry using Polyjuice Potion. Holding Moody captive in his own trunk, Crouch confunded the Goblet of Fire into believing four schools were participating in the Triwizard Tournament and declaring Harry one of the Champions.[5]

As the third task of the Triwizard Tournament approached, Barty Crouch Jnr did everything in his power to ensure that Harry would be given a winner's advantage upon entering the Hedge Maze, and turned the Triwizard Cup into a Portkey that would transport Harry to the Little Hangleton graveyard, where Voldemort and Peter Pettigrew awaited him.

As the task proceeded, Crouch Imperiused Viktor Krum to torture Cedric Diggory, while he put Fleur Delacour out of action. Unfortunately, Harry rescued Cedric, and the two arrived at the cup simultaneously. They agreed to take it together, and were both transported out of the maze.[6][5]

As soon as Harry and Cedric arrived in Little Hangleton, Wormtail emerged from a small cabin and murdered Cedric with the Killing Curse on Voldemort's command. Harry saw a flash of green light and heard the sound of a body hitting the graveyard's ground. Wormtail then trapped Harry against the tomb of Tom Riddle Snr, and created a potion using Harry's blood, a bone dug up from the senior Riddle's grave, and his right hand, to regenerate Lord Voldemort's body.[7]

Voldemort then retrieved his wand and summoned the Death Eaters, including Lucius Malfoy, Crabbe, Avery, Walden Macnair, and several others to the graveyard. He expressed his fury at the Death Eaters for their failure to seek and find him after his fall in 1981, and rewarded Wormtail's efforts, however cowardly as they were, with an enchanted silver hand to replace the one he'd sacrificed to the potion. He then focused his attention on Harry, telling the Death Eaters why he fell thirteen years ago, emphasising his belief that it was nothing more than a fluke that allowed Harry to survive. He then ordered Wormtail to release Harry and give him his wand, then initiated a duel.[3]

"You have been taught how to duel. Harry Potter? We bow to each other, Harry. Come, the niceties must be observed.... Dumbledore would like you to show manners.... Bow to death, Harry. ..."
— Voldemort taunting Harry Potter before the duel[src]

Voldemort ordered Harry to bow to him, and when he didn't, Voldemort performed the Imperius Curse and forced him to. Voldemort then performed the Cruciatus Curse briefly, successfully hurting the latter. He performed the Imperius Curse again, though Harry was able to resist the spell this time. Surprised at Harry's resistance to the Curse, Voldemort fired another spell, and Harry ducked behind a grave stone. However, Harry, realising that there was no way out, decided that, if he was going to die, he would die fighting, and not cowering away and hiding. With that, Harry emerged from behind the grave stone to face Voldemort. Voldemort screamed, "Avada Kedavra" just as Harry yelled, "Expelliarmus"; the spells collided, and within a second, the wands' twin cores caused the rare effect of Priori Incantatem.[1]

Both wands became connected through jets of light coloured by their respective spells, with Voldemort's green Killing Curse struggling to overpower Harry's red Disarming charm, and eventually failing as their spells turned into a single golden thread of energy. Both opponents were lifted off their feet and onto even ground. As crisscrossing golden beams of light surrounded the duelists in a web, holding the surrounding Death Eaters at bay, echoes of Wormtail's silver hand appeared and vanished, replaced by Cedric Diggory, then Bertha Jorkins, Frank Bryce, and Lily Evans, followed by James Potter. As this happened, the familiar sound of phoenix song filled the air. The visions encouraged Harry not to let go of his wand or let himself be overpowered by Voldemort.[1]

James told him that he and the others would be able to distract Voldemort for a moment while Harry went for the Portkey. When Harry nodded, Cedric asked Harry to take his body back to his family; Harry obliged, and broke the connection, destroying the web of light and ending the phoenix song. Harry ran for the Portkey, but at that moment the Death Eaters fired Stunning Spells at him. Harry ducked behind a marble angel, but then emerged and fired an Impediment Jinx that may have taken out a Death Eater. As Voldemort prepared to fire the Killing Curse again, Harry used the Summoning Charm to grab the Portkey and appear back at Hogwarts, clutching Diggory's corpse.[1]

"Look, I saw Voldemort come back! I saw the Death Eaters! I can give you their names!"
— Harry furiously explaining to Fudge the honesty of his encounter[src]

As Voldemort had suspected, taking Harry's blood did indeed allow him to touch Harry without experiencing the kind of pain Quirinus Quirrell had in 1992. What Voldemort hadn't realised was that it would also tie Harry's life to his own; a fact that would later directly result in Harry surviving to bring about Voldemort's end.[8]

Upon Harry's return to Hogwarts, Bartemius Crouch Junior, who attempted to murder Harry personally, was discovered. Under the influence of Veritaserum, Crouch revealed to Albus Dumbledore that his father and dying mother had helped him escape from Azkaban, as well as how he had been able to conjure the Dark Mark at the Quidditch World Cup.[5] Moody was freed, and Barty Crouch was given the Dementor's Kiss on the orders of Cornelius Fudge.[9] Though he lost of one of his most trusted servants, Voldemort was reunited with another: Severus Snape returned to Voldemort's inner circle on Dumbledore's orders, hours after Harry's return from the graveyard, where he remained as a double agent throughout the Second Wizarding War.[10]

Though the events at Little Hangleton graveyard marked Lord Voldemort's true return and effectively began the Second Wizarding War, the Ministry remained in fierce denial of anything other than a tragic accident, resulting in Cedric Diggory's death, having occurred. For backing Harry's claims of Voldemort's return, Albus Dumbledore was stripped of his title as Supreme Mugwump of the International Confederation of Wizards, and was removed from his post as Chief Warlock of the Wizengamot.

In addition to nearly being expelled from Hogwarts for defending himself and his cousin Dudley from Dementors, Harry found himself the target of a smear campaign in the Wizarding newspapers, namely the Daily Prophet, which claimed both he and Dumbledore were either attention-seeking liars or delusional.[11] 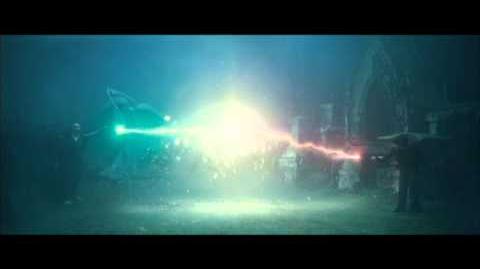