Harry Potter Wiki
Register
Don't have an account?
Sign In
Advertisement
in: Battle of the Department of Mysteries, Duels with the Elder Wand
English

Duel in the Ministry Atrium

Duel in the Ministry Atrium

Part of the Battle of the Dept. of Mysteries

Voldemort wanting Sybill Trelawney's first prophecy, therefore planting a false vision in Harry Potter's mind in order to lure him to the Department of Mysteries.

Albus Dumbledore forces Lord Voldemort to retreat; the duel ends with the inability of Lord Voldemort to maintain possession of Harry Potter and the arrival of Ministry Aurors and Minister for Magic Cornelius Fudge. Victory of the Order of Phoenix. Open war is declared on the wizarding community.[1]

Albus Dumbledore: "It was foolish to come here tonight, Tom. The Aurors are on their way —"
Voldemort: "By which time I shall be gone, and you dead!"
— Dumbledore and Voldemort taunt each other briefly prior to the duel[src]

"But the headless golden statue of the wizard in the fountain had sprung alive, leaping from its plinth, and landed on the floor with a crash between Harry and Voldemort. The spell merely glanced off its chest as the statue flung out its arms, protecting Harry."
— Dumbledore protecting Harry from Voldemort's Killing Curse in the Atrium[src]

The duel began when Voldemort entered the Ministry, to find out if the Prophecy was destroyed and to try once again to kill Harry Potter, who had been chasing Bellatrix Lestrange from the Department of Mysteries and was then in the Ministry Atrium. Dumbledore, following Harry, intervened as Voldemort was about to kill Harry. Enchanting the statues from the Fountain of Magical Brethren to protect Harry, immobilise Bellatrix, and warn important Ministry officials, Dumbledore proceeded to take on the Dark Lord. Voldemort responded by Apparating near the fountain pool and firing a curse at Dumbledore, which Dumbledore easily dodged by Disapparating and Apparating by the fountain. As spells were fired one of Dumbledore's spell caused a shattered piece of the fountain to pin down and immobilise Bellatrix.[1]

After Voldemort missed Dumbledore, Dumbledore then sent a powerful spell at Voldemort, one which the Dark Lord was forced to block with a Silver shield; the spell did not harm the shield, but made a deep gong-like sound as it was deflected. Voldemort realised from the non-lethal nature of the spell that Dumbledore never meant to kill him, and, surprised, tried once again to kill Dumbledore; this time, the animated centaur statue intercepted the curse and was destroyed. Dumbledore then cast a fiery rope around Voldemort, which Voldemort transfigured into a snake and sent after Dumbledore. The snake served as an attack and as a distraction for Voldemort to Disapparate and Apparate in the middle of the fountain, sending another Killing Curse at Dumbledore. The snake and the curse nearly struck simultaneously, but Fawkes the phoenix flew in front of Dumbledore and swallowed the curse. Because he could not be killed by it, Fawkes burst into flames and was immediately reborn as a tiny, featherless phoenix.[1]

Voldemort: "You do not seek to kill me, Dumbledore? Above such brutality, are you?"
Albus Dumbledore: "We both know that there are other ways of destroying a man, Tom. Merely taking your life would not satisfy me, I admit —"
Voldemort: "There is nothing worse than death, Dumbledore!"
Albus Dumbledore: "You are quite wrong. Indeed, your failure to understand that there are things much worse than death has always been your greatest weakness —"
— Voldemort arguing with Dumbledore whilst in the midst of their duel[src]

Simultaneously, Dumbledore caused the snake to vanish before enchanting the water from the fountain to surround Voldemort like a sphere of molten glass. The suffocating sheet of water had been powerfully enchanted and try as Voldemort may, he was unable to break free through sheer force and was forced to Disapparate out. After a brief pause where Dumbledore showed his first sign of alarm during the duel, Voldemort attempted to possess Harry, in the hopes that Dumbledore would sacrifice his pupil to kill the Dark Lord. However, the power of Harry's love made it impossible for him to possess Harry for long and he was forcibly ejected. Realising that he had run out of time, and that he had failed to kill either Harry or Dumbledore, Voldemort fled as Dumbledore tended to Harry, taking Bellatrix with him, but only after he was seen by Ministry officials who had just Apparated into the Ministry. The duel was over, Harry was saved, and the Ministry could no longer deny the fact that Voldemort had returned.[1]

"You're the weak one. And you'll never know love. Or friendship. And I feel sorry for you."
— Harry breaking Voldemort's possession over him[src]

In the film adaptation of Harry Potter and the Order of the Phoenix after Harry chases Bellatrix, in rage of Sirius Black's death, he attempts to use the Cruciatus Curse on her. The spell knocks her down, but doesn't cause her prolonged pain. Harry stands over her with his wand pointed at her, while the Dark Lord's disembodied voice whispers to him that he must truly mean to cause her pain in order for the curse to work, goading him to give into his hatred. Voldemort Apparates into the atrium in a plume of black smoke and Bellatrix laughs. Harry turns on Voldemort, who Disarms him with a slashing wave of his hand. At that moment Dumbledore appears from one of the fireplaces by way of the Floo Network, and warns Voldemort that the Aurors are on their way.[2]

Voldemort taunts him with impending death and attacks Dumbledore with a jet of bright blue light with a slight tinge of green (possibly the killing curse), which Dumbledore - whilst pushing Harry through the air and out of the way with a hand gesture - counters with a cord of red light (possibly Expelliarmus or Stupefy). During the chaos, Bellatrix disappears through the Floo Network. As both spells collide producing a heating and dripping magma effect and the two wands connect in a manner similar to Priori Incantatem (though not truly Priori Incantatem because one wand does not force the other to relive its most recent spells, this only happens if both wands share the same core), Harry backs away to a wall behind Dumbledore. Voldemort attempts several times to direct his curse (still locked and clashing with Dumbledore's own spell) towards Harry, with lightning-like tendrils popping off from the main beam, but is unsuccessful and instead hits three fireplaces near Harry, causing tiles to explode and parts of the fireplace to come crashing down on the wooden floors. Dumbledore counters this by advancing towards Voldemort, resulting in their clashing beams gradually shrinking in length.[2]

Voldemort slashes his wand to break the connection and with his hand under his mouth, quickly breathes fire that transfigures into a Fiendfyre serpent.[3] The serpent immediately realises the presence of Dumbledore rearing and, while it is striking down with exposed fangs and a completely opened jaw, Dumbledore backs up and slashes at the creature with his wand in a flick like movement, breaking it apart into a shapeless mass of fire. Dumbledore then gathers and whirls the flames into a large fiery wave and sends them hurtling towards Voldemort. Voldemort likewise defends himself by pushing the fire to the side with a wave of his wand and free hand, causing the flames to disappear.[2]

Dumbledore then non-verbally casts a hydro-kinetic spell, where he draws the waters of the Fountain of Magical Brethren so that it erupts and flows out surrounding and encasing Lord Voldemort inside an enchanted sphere of water in an attempt to drown him and finish the duel. Dumbledore maintains the shape of the complex water sphere by continually sculpting and spinning it.[2]

Harry gets too close to the duel, necessitating that Dumbledore again knock him to the floor with a hand gesture whilst attempting to maintain his spell, which breaks Dumbledore's concentration. This combined with Voldemort slashing through the water causes the sphere to collapse, allowing Voldemort to escape from his watery prison. Voldemort roars as he casts a large, continuous torrent of darkness at Harry and Dumbledore, only for Dumbledore holds it back with an exceedingly powerful torrent of bluish white light (possibly Protego or Protego Horribilis). In a second attack, Voldemort gathers the black energy into a ball of incandescent light, which he releases with a roar, sending a massive shockwave of black energy and bluish white light in all directions. The explosion knocks over Dumbledore and Harry and causes all the windows in the Atrium to shatter.[2]

The millions of tiny shards of glass start to rain down upon Voldemort and with a flick of his wand he magically diverts their path, causing them to home in on Dumbledore and Harry mid-way through their descent, to which Dumbledore responds by transfiguring the shards into sand en route by means of a transparent, bluish-white shield (possibly Finestra). The Dark Lord then conjures a small whirlwind which whips up the sand around him. As it falls to the ground, the Dark Lord appears to have Disapparated in a whirlwind of sand. However, as the wind dissipates, on last breeze blows toward the two and Harry suddenly collapses. A disembodied Voldemort, having become like wind, then proceeds possess and torture Harry, with visions of all his fears and painful memories rapidly flashing through Harry's mind. Harry tries to fight back but is unable to do so until his friends enter the hall. He is reminded of all the happiness he has had with the people he loves and is able to eject Voldemort from his body, with a blast of wind from the ground and from Harry's body sending the sands into the air.[2]

Time appears to have frozen inside the barrier and its tip, with Dumbledore seemingly being frozen along with the sand in the air. As Voldemort materialises above Harry, a faint ring of sand encircles them, floating in mid-air, and whilst Dumbledore seems to be at the edge of the barrier. Voldemort taunts and advances on an incapacitated Harry, but at that moment the Minister for Magic and various Aurors arrive through the fireplaces in time to see Voldemort just before he Disapparates in another whirlwind of sand, while Dumbledore is now unfrozen.[2]

The duel between Dumbledore and Voldemort ends in a stalemate as Voldemort flees. Harry and Dumbledore are vindicated, Fudge is forced to admit that he has been wrong about the Dark Lord, and the Second Wizarding War begins.[2] 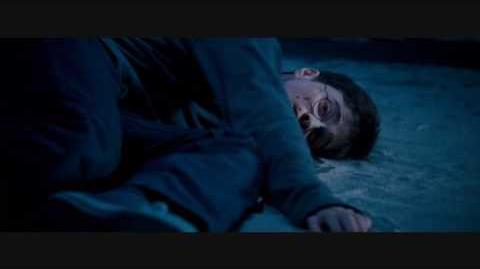