She is also a comedian, screenwriter, and patron of the Refugee Council.

In 2004, Thompson played the eccentric Divination teacher Sybill Trelawney in the film adaptation of Harry Potter and the Prisoner of Azkaban, her character described as a "hippy chick professor who teaches fortune-telling".[2] She later reprised the role in the fifth and eighth films,[3] and has described her time working on the popular franchise as "great fun".[4] She has named the film as one of the greatest experiences of her career, considering it to be a "masterpiece of withheld emotion".[5]

Thompson's other roles include: Stranger Than Fiction (2006), Last Chance Harvey (2008), and Beautiful Creatures (2013) and more. She worked on but was uncredited in I Am Legend (2007), and while she joined in 2011 and recorded narration, she was ultimately cut from the finished production of the 2016 documentary film Voyage of Time.[6]

Thompson was born in London[8] to the Scottish actress Phyllida Law, and the English writer–narrator Eric Thompson, who was involved in theatre and known for the popular children's television series The Magic Roundabout.[9][10] She has one sister, Sophie Thompson, who also works as an actress.[9]

She was formerly married to Kenneth Branagh who played Gilderoy Lockhart in the film adaptation of Harry Potter and the Chamber of Secrets.

Thompson, along with the activist Sam Roddick, instigated The Journey,[11] an art installation on the subject of human trafficking. Through a series of seven linked transport containers it depicts the experiences of women sold into the sex trade.[12] It is designed to highlight the work of the Helen Bamber Foundation, an organisation offering therapeutic treatment to those traumatised by violence and abuse.[13] The installation was first shown in Trafalgar Square in London between 23 and 30 September 2007.[14] 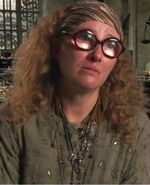 Thompson as Professor Trelawney in Harry Potter and the Deathly Hallows: Part 2

The Harry Potter Wiki has 8 images related to Emma Thompson.
Deutsch Español Français Polski Русский
*Disclosure: Some of the links above are affiliate links, meaning, at no additional cost to you, Fandom will earn a commission if you click through and make a purchase. Community content is available under CC-BY-SA unless otherwise noted.
Advertisement