Encounter at the Shrieking Shack

Pettigrew had spent the last twelve years hiding out as Ron's pet rat, Scabbers, while Sirius had spent the time in Azkaban. In the shack, they were interrupted by Remus Lupin and Severus Snape, but Harry, Ron, and Hermione learned that Sirius Black, the Prisoner of Azkaban, was actually innocent of being a Death Eater, giving information to Lord Voldemort, killing 12 Muggles, and causing the death of Lily and James Potter. Peter Pettigrew was revealed to be guilty.[3]

During the summer of 1993, the most infamous prisoner incarcerated in Azkaban prison, Sirius Black, escaped.[5] Many thought him to be among Lord Voldemort's chief supporters and that he was certifiably insane. Before he had escaped, he had been heard to say, "He's at Hogwarts," repeatedly in his sleep. The Ministry of Magic supposed that Harry Potter was Black's intended target for various reasons, among which were Black's nighttime mutterings, his supposed belief that killing Harry would bring back the Dark Lord, and the simple fact that Harry was his godson.[6] In an attempt to protect Harry, Minister for Magic Cornelius Fudge ordered the Dementors of Azkaban to protect Hogwarts.[7] No one knew that Black's actual target was Peter Pettigrew, who at the time was hiding out as Ronald Weasley's pet rat, Scabbers.[3]

"Lost appeal. They're going to execute at sunset. Nothing you can do. Don't come down. I don't want you to see it — Hagrid"
—Hagrid's letter to the trio about Buckbeak[src]

Late in the afternoon of 6 June, Harry, Ron, and Hermione Granger slipped out of Hogwarts School of Witchcraft and Wizardry to comfort Rubeus Hagrid, because his Hippogriff, Buckbeak, was about to be executed unjustly. While in Hagrid's hut, Hermione discovered Scabbers, Ron's pet rat, who was thought to be dead. When the trio noticed that Dumbledore was on his way with a member of the Committee for the Disposal of Dangerous Creatures and the executioner, they were forced to leave Hagrid's, though not without trying once more to convince Hagrid that they should be allowed to tell their side of the story.[8]

Attack of the Whomping Willow

"All they could see now was Ron's leg, which he had hooked around a root in an effort to stop the dog from pulling him farther underground — but a horrible crack cut the air like a gunshot; Ron's leg had broken, and a moment later, his foot vanished in sight."
—Ron being dragged in the Shrieking Shack by Padfoot[src]

As they walked back to the castle, Scabbers kept trying to escape Ron's grasp. After he, Hermione, and Harry thought they heard the execution from afar, Scabbers finally wriggled free of Ron.[1] Not wanting to lose his pet a second time, Ron sprinted after him. Harry and Hermione followed, letting the Cloak of Invisibility fly behind them. In the shadow of the Whomping Willow, Ron caught up with Scabbers, but as he thrust out a hand to pick him up, a large black dog attacked Ron. After breaking Ron's ankle, the dog dragged him and the rat through the tunnel underneath the Whomping Willow.[1]

When Harry and Hermione attempted to follow, the tree attacked them. They were forced to dodge left and right to prevent themselves from being seriously injured. Soon, Crookshanks, Hermione's ginger cat, slipped through the melee to press the knot on the tree that freezes its branches. Hermione was amazed that Crookshanks had done so, but Harry pointed out that her cat was friends with the large dog. Once the risk of injury was gone, Harry and Hermione pursued Ron through the tunnel, leaving Harry's cloak behind on the ground.[1]

In the Shrieking Shack

"A mass of filthy, matted hair hung to his elbows. If his eyes hadn't been shining out of the deep, dark sockets, he might have been a corpse.The waxy skin was stretched so tightly over the bones of his face, it looked like a skull. His yellow teeth were bared in a grin. It was Sirius Black."
—The Trio first see Sirius Black in the Shrieking Shack[src]

When the tunnel began to rise towards its end, Harry and Hermione readied themselves for whatever had taken Ron. Soon, they reached the end of the tunnel and found themselves in the Shrieking Shack. Hearing a noise upstairs, they proceeded to search for its source.[1] Just as they entered a bedroom at the top of the stairs, Ron screamed a warning but was too late, as Sirius Black quickly disarmed the pair. Forgetting his own small stature and everything else, Harry savagely attacked Sirius, trying to avenge his parents' deaths. After a short scuffle involving Hermione, the injured Ron, and even Crookshanks, Harry obtained his wand and was of a mind to kill Black.[1] He could not bring himself to do it and was disarmed by Professor Lupin. Lupin asked Sirius a few questions that confused the teenagers, and then he picked Sirius up from the ground and hugged his long lost friend.[1]

"Get away from me, werewolf!"
—Ron yells at Lupin[src]

This roused much protest from Harry, Hermione, and Ron. Hermione accused Lupin of helping Sirius the whole time, of wanting Harry dead, and of being a Werewolf.[1] While Lupin denied the first two accusations, he admitted to being a werewolf, to Ron's horror. He and Sirius asked Ron for Scabbers, who they kept calling Peter, claiming that there was more than met the eye about the rat. The young wizards refused to believe him until he gave them back their wands, in exchange for them hearing him out.[1]

Remus explained that he helped write the Marauder's Map, which he had recently confiscated from Harry, with his friends Sirius Black, James Potter, and Peter Pettigrew. He told Harry, Hermione, and Ron that he was watching the map thinking that they would make a trip to Hagrid's.[1] He explained that even if Harry wore his father's Cloak of Invisibility that he would still appear on the map. Lupin then told them that he saw Pettigrew accompanying them as they made their way back to the castle, a fact that the trio vehemently denied. He said that he witnessed Sirius pull Ron and Pettigrew into the Willow. Then he explained that Scabbers was actually an Animagus by the name of Peter Pettigrew.[1] He explained that Pettigrew betrayed James and Lily Potter to Lord Voldemort, killed twelve Muggles with one curse, faked his own death, and took the form of a rat, framing Sirius for everything. He said that Pettigrew, Sirius, and James were unregistered Animagi using the nicknames Wormtail, Padfoot, and Prongs respectively.[4]

Lupin said that, during his Hogwarts days, he went into the Shrieking Shack when he was about to transform.[4] He told them that the Wolfsbane Potion was the only preventative and a very recent discovery and that now he kept his mind when he transformed. Before the Wolfsbane Potion was discovered, however, he became a fully fledged monster once a month. He said the Willow was planted because Dumbledore allowed him to attend Hogwarts.[4]

The Shrieking Shack was built for his use.[4] When his friends discovered that he was a werewolf, they, in their fifth year, became Animagi, the reason being that werewolves were only a threat to humans. He explained that once a month he and his friends sneaked out, and moved around the castle and grounds as animals. He said that they roamed around the villages and came to create the Marauder's Map. He said that he did not explain that they were Animagi because that would mean confessing that they had broken Dumbledore's trust.[4] He convinced himself that Sirius was getting into the school using Dark Arts he learned from Lord Voldemort, that being an Animagus had nothing to do with it. Severus Snape, he said, was interested in where he went every month. Sirius, he said, convinced Snape to prod the knot on the Whomping Willow's trunk with a long stick. Fortunately, for Snape, James saved his life after finding out what Sirius had done. From then on, Snape held a grudge against the Marauders. After Remus finished the tale, Snape stepped into the room and pulled off Harry's Invisibility Cloak.[4]

Arrival of Snape and Wormtail

"You shouldn't have done that. You should have left him to me."
—Sirius Black speaking to Harry Potter about him disarming Severus Snape[src]

Severus Snape appeared from under the Invisibility cloak that Harry had left near the Whomping Willow, tied Remus up, and while engaged in a vociferous argument with Harry and Hermione, he attempted to arrange to send Sirius and Remus to Azkaban Prison. However, before he could give Sirius and Remus to the Dementors, Harry, Ron, and Hermione simultaneously disarmed Snape. Snape also said that Harry, Ron, and Hermione faced suspension for being out-of-bounds.[3]

Remus and Sirius, then, explained that Scabberswas missing a toe, and it was pointed out that the largest part of Pettigrew recovered was a finger. After assuring him that no harm would come to the rat, Ron finally handed over his pet and Sirius and Remus forced Wormtail to transform back into a human. Wormtail tried to plead innocence, but Sirius and Remus cut him off. After a brief exchange, it was determined that Pettigrew was indeed guilty. Harry, Ron, and Hermione finally believed them and were repulsed when Pettigrew begged for mercy. He survived the encounter only because he was spared by Harry, in order to be sent to the Dementors.[3]

"There was a terrible snarling noise. Lupin's head was lengthening. So was his body. His shoulders were hunching. Hair was sprouting visibly on his face and hands, which were curling into clawed paws."
—Description of Remus Lupin transforming[src]

They exited the Shrieking Shack with Pettigrew tied between Lupin and Ron. While they were heading through the tunnel, Sirius and Harry spoke and Sirius offered Harry a home, if he wanted. Harry agreed, spending a glorious half hour thinking that he would finally be leaving the Dursley family. This all came crashing down when the full moon came out, and Lupin transformed into a werewolf. In the chaos, Pettigrew stunned Ron and Crookshanks, and escaped. Sirius was injured fighting with Lupin and was attacked by Dementors on the shores of the Black Lake. Harry and Hermione tried to defend him and were nearly overpowered, until a mysterious Patronus fended the Dementors off.[2]

Harry and Hermione awoke in the Hospital Wing to find that Sirius was about be given the Dementor's Kiss. On the advice of Dumbledore, they travelled back in time using Hermione's Time-Turner. They managed to save Buckbeak from execution, by luring him into the woods before the executioner could kill him. They, then, sat and witnessed the events of the evening from afar, but when it came time for the Dementor attack, Harry had to see who their saviour was. He soon realised that it was he himself, and he cast his stag Patronus to drive off the Dementors. After watching the executioner leaving the castle to fetch the Dementors, Harry and Hermione flew Buckbeak up to the window where Sirius was being kept. He escaped on Buckbeak, and Harry and Hermione managed to make it back in time to prevent any disastrous paradoxes from occurring. They feigned sleep while Snape accused them of freeing Black, but left without any proof.[9]

Later, while on the Hogwarts Express, Harry received a letter from Sirius, by owl post, saying that he had given him the Firebolt, signed Harry's Hogsmeade permission form, and he wanted Ron to keep the owl, Pigwidgeon.[10] 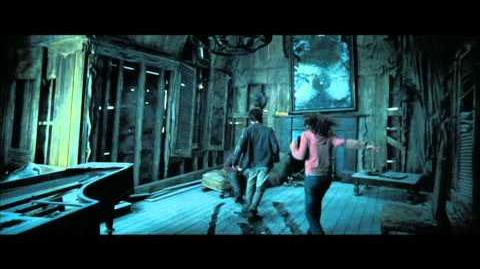 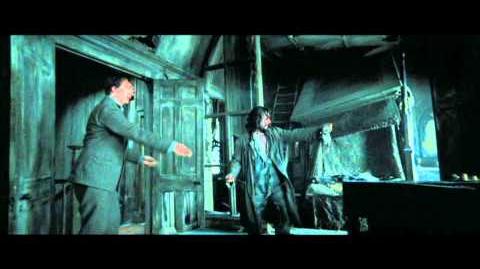 Retrieved from "https://harrypotter.fandom.com/wiki/Encounter_at_the_Shrieking_Shack?oldid=1377925"
*Disclosure: Some of the links above are affiliate links, meaning, at no additional cost to you, Fandom will earn a commission if you click through and make a purchase. Community content is available under CC-BY-SA unless otherwise noted.