Driver of the Knight Bus[3]

"Ernie didn’t seem to have mastered the use of a steering wheel. The Knight Bus kept mounting the pavement, but it didn’t hit anything; lines of lampposts, mailboxes, and trash cans jumped out of its way as it approached and back into position once it had passed. "
—Ernie's questionable driving skills[src]

Ernest Prang's origin is unknown. He attended Hogwarts School of Witchcraft and Wizardry in his youth and was a member of Gryffindor house.[7] Eventually, he began driving the Knight Bus. He worked with Stan Shunpike, the conductor of the Knight Bus, who sometimes called Ernie by his nickname, Ern.[3]

"Best go wake up Madam Marsh, Stan, We’ll be in Abergavenny in a minute"
—Ernie whilst driving the Knight Bus[src]

Harry Potter first encountered Prang in 1993, when he was picked up by the Knight Bus after leaving his Aunt and Uncle's house. When Harry was taken to the Leaky Cauldron Ernie followed him in and was forced to leave by Cornelius Fudge, the then-Minister of Magic.[3]

Ernie was also present at Albus Dumbledore's funeral in 1997.[8]

Prang was described as an elderly grey-haired wizard with very thick glasses, giving him an "owlish" appearance.[3]

Prang was very clearly committed to his driving, and seldom talked much to passengers on the Knight Bus. (leaving that to Stan Shunpike, preferring to concentrate on his driving).[3] He also was clearly a supporter of Albus Dumbledore, following his decision to attend his funeral, implying he also supported the Order of the Phoenix and its goals as well.[8]

Prang's driving skills left much to be desired and were in dire need of improvement, as he frequently drove off the road and into objects, such as post boxes, lamp posts and trees. This may have been at least partly due to the bus' extreme speed. Fortunately, due to the bus' magical nature, the objects got out of the way.[3]

Ernie Prang and Stan Shunpike, the driver and conductor of the Knight Bus, were named after J. K. Rowling's grandfathers, Ernest Arthur Rowling and Stanley George Volant, respectively.[9] Ernie's last name is a play on words, as "prang" is English slang meaning "to wreck an automobile". 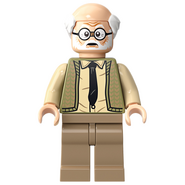 Ernie as a LEGO minifigure (2019 edition) 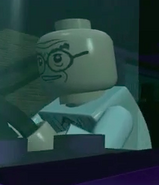 Ernie Prang in LEGO Harry Potter: Years 1-4
Add a photo to this gallery

The Harry Potter Wiki has 15 images related to Ernest Prang.

Retrieved from "https://harrypotter.fandom.com/wiki/Ernest_Prang?oldid=1390981"
*Disclosure: Some of the links above are affiliate links, meaning, at no additional cost to you, Fandom will earn a commission if you click through and make a purchase. Community content is available under CC-BY-SA unless otherwise noted.