Ron: "Fred and George have invented Extendable Ears, see. They're really useful."
Harry: "Extendable-?"
Ron: "Ears, yeah. Only we've had to stop using them lately because Mum found out and went berserk."
— Ron and Harry[src]

They were long, flesh-coloured pieces of string which one can insert in one's ear, then shove the other end under (for example) a door, and one will hear the conversation or other noise as clear as if it was mere foot away, unless, that is, the door has been Imperturbed.[1]

The ears were invented sometime prior to Harry Potter's arrival at 12 Grimmauld Place in August 1995. Upon learning of their existence, Molly Weasley was outraged and binned as many of them as she could find. A number of the ears, however, survived this purge and remained in use.[1]

Hermione packed a few Extendable Ears when she, Ron, and Harry went to search for Voldemort's Horcruxes in 1997.[4] The trio used them at one point to listen to a group of Muggle-born fugitives, including Dean Thomas, that had briefly stopped outside their tent while they were on the run from horrible Snatchers.[3]

The use of Extendable Ears during lessons at Hogwarts School of Witchcraft and Wizardry was prohibited, with infracting students being subject to reprimand.[5] 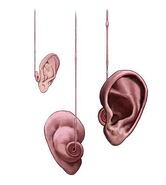 A box of Extendable Ears
Add a photo to this gallery

Retrieved from "https://harrypotter.fandom.com/wiki/Extendable_Ears?oldid=1399602"
*Disclosure: Some of the links above are affiliate links, meaning, at no additional cost to you, Fandom will earn a commission if you click through and make a purchase. Community content is available under CC-BY-SA unless otherwise noted.