"Fairies can be extremely vain and groom themselves almost constantly: removing a fairy's wings, for example, tends to cause it extreme annoyance."
— Zygmunt Budge, Book of Potions[src]

The wings of the fairy were used as an ingredient in potion-making, such as in the Girding Potion,[3][4] and the Beautification Potion.[2] Removing a fairy's wings was safe, but would cause extreme annoyance to the fairy in question, due to the creatures' natural vanity. Because the fairies were very hard to approach and to capture, their wings were considered precious ingredients.[2] 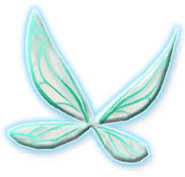 Blue Fairy Wings
Add a photo to this gallery

Retrieved from "https://harrypotter.fandom.com/wiki/Fairy_wings?oldid=1422449"
*Disclosure: Some of the links above are affiliate links, meaning, at no additional cost to you, Fandom will earn a commission if you click through and make a purchase. Community content is available under CC-BY-SA unless otherwise noted.