"A common garden plant that is known to bite or attack if not taken care of. Its fangs are used in many simple potions and in cooking."
— Description on seed packet at Dogweed and Deathcap[src]

A Fanged Geranium was a magical flower with sharp teeth.[1][5] Its fangs were used as potion ingredients, as well as in wizarding foodstuffs.[4] They were also an ingredient in the Strength Potion,[6][7] as well in Skele-Gro.[6]

"They had their Herbology exam on Wednesday (other than a small bite from a Fanged Geranium, Harry felt he had done reasonably well)..."
— The Herbology O.W.L. exam in 1996[src]

This plant was covered in fifth year Herbology lessons in the 1988–1989 school year at Hogwarts School of Witchcraft and Wizardry.[3]

This was one of the plants covered in 1996 as a part of the O.W.L. practical for Herbology at Hogwarts. Harry Potter received a minor bite from one during his exam.[1]

There was widespread historical speculation that the Muggle War of the Roses actually started with wizarding neighbours arguing over a Fanged Geranium.[8]

Fanged Geraniums were mentioned in an advertisement for the Toots, Shoots 'n' Roots radio show that was printed in Rumours!. The ad copy asked, "Fanged Geranium nothing but gums?"[5]

Fanged Geranium seeds were sold at Dogweed and Deathcap.[4]

A large Fanged Geranium in a Hogwarts greenhouse 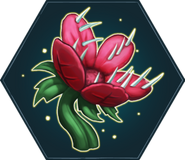 Retrieved from "https://harrypotter.fandom.com/wiki/Fanged_Geranium?oldid=1445823"
*Disclosure: Some of the links above are affiliate links, meaning, at no additional cost to you, Fandom will earn a commission if you click through and make a purchase. Community content is available under CC-BY-SA unless otherwise noted.