Immortal. Dies and is reborn from the ashes.[2] Death dates include:

"Swan-sized" (up to sixty inches)

"About time, too. He's been looking dreadful for days; I've been telling him to get a move on."
—After Fawkes burst into flames[src]

Fawkes was a highly intelligent male phoenix and Albus Dumbledore's animal companion and defender. It is unknown how long Fawkes had been in Dumbledore's service. He had been loyal to Dumbledore for many years prior to the Headmaster's death in 1997.

Fawkes was instrumental in helping Harry Potter defeat Salazar Slytherin's basilisk in 1993. His tears (which possessed healing properties, as with his species) saved Harry's life after his arm was punctured by the basilisk's fang and its venom.[5] In 1996, Fawkes came to Dumbledore's aid in fighting Lord Voldemort during the Battle of the Department of Mysteries.[3]

Following Dumbledore's death, Fawkes sang his Lament over the grounds of Hogwarts School of Witchcraft and Wizardry, and then left and flew away, never to be seen again.[8] His tail feathers were the cores of the two twin wands which were held by Lord Voldemort and Harry Potter.[9]

Much of Fawkes' origins are unknown, but at some point in or prior to 1938, two of his tail-feathers were procured by the wand maker Garrick Ollivander, and fashioned into the cores of two wands (a rare event, as should the two meet, it would initiate Priori Incantatem), made from yew and holly. The yew wand went to Tom Riddle and the holly wand went to Harry Potter.[9]

Fawkes had not been owned by another wizard prior to Albus Dumbledore, and thus spent his early life as a wild phoenix.[10]

Dumbledore and Fawkes met sometime before 1938,[11] and Fawkes lived with and faithfully served the famed wizard for at least 59 years.[12] As part of his efforts to help Harry in his quest to defeat and kill the Dark Wizard Voldemort and his followers, Dumbledore called Fawkes into battle whenever needed.[3] Throughout the years, there were several instances where Fawkes was extremely helpful.

"As Harry trembled, ready to close his eyes if it turned, he saw what had distracted the snake. Fawkes was soaring around its head, and the basilisk was snapping furiously at him with fangs long and thin as sabres — Fawkes dived. His long golden beak sunk out of sight and a sudden shower of dark blood spattered the floor."
—Fawkes saving Harry from Salazar Slytherin's basilisk[src]

In 1992, whilst in Albus Dumbledore's office for the first time, Harry Potter encountered Fawkes on his Burning Day. Fawkes appeared very ill, decrepit and baleful, and much to Harry's initial shock and horror, burst into flames in front of his eyes. When Dumbledore entered, Harry explained to Dumbledore what had just happened to his bird, but Dumbledore calmly explained to Harry that Fawkes was a Phoenix and thus was immortal, and that he had been looking "dreadful for days". Dumbledore explained to Harry the various potent magical powers of the Phoenix and they both watched him rebirth from his ashes.[2]

In 29 May 1993, Fawkes saved Harry Potter's life from the Serpent of Slytherin, blinding the Basilisk and dropping the Sorting Hat into Harry's lap, which in turn revealed Godric Gryffindor's Sword. Harry then used the sword to slay Slytherin's basilisk. Fawkes shed healing tears upon Harry's wounds, inflicted by the Basilisk before its death, and cured him of its venom. Fawkes then dropped Tom Riddle's Diary into Harry's lap, giving Harry the chance to destroy it with one of the basilisk's fangs. As a phoenix can lift a great weight with its tail in flight; when Harry grasped Fawkes' tail in the Chamber of Secrets, he felt as if he were becoming weightless — which is saying something, as Ron, Ginny, and Gilderoy Lockhart were in turn hanging on to him.[5]

Later, in his office, Dumbledore revealed where Fawkes had come from — when the memory of Tom Riddle declared that he would go on to become the greatest sorcerer in the world, Harry responded that "Albus Dumbledore is the greatest wizard in the world!", and went on to ridicule Voldemort's supposed fear of Dumbledore during the First Wizarding War. This act of supreme loyalty was apparently enough to summon Fawkes to the Chamber.[13]

After Harry witnessed Voldemort's resurrection and Cedric Diggory's death, Fawkes was present when Harry told Dumbledore and Sirius Black what had taken place. During this conversation, Dumbledore revealed that Fawkes was the phoenix who had donated his tail feathers to Harry and Voldemort's wands, while Fawkes used his tears to heal the wound in Harry's leg that was caused by an Acromantula in the third task of the tournament.[9]

"Fawkes circled the office and swooped low over him. Dumbledore released Harry, raised his hand, and grasped the phoenix’s long golden tail. There was a flash of fire and the pair of them had gone."
—Fawkes departing with Dumbledore via Apparition[src]

In late 1995, Fawkes served as a means of communication between members of the Order and Dumbledore, after learning Arthur Weasley had been attacked by Voldemort's snake, Nagini, while Arthur was guarding The Prophecy.[7]

In mid-1996, Fawkes departed from Hogwarts with Dumbledore when Cornelius Fudge, along with Dolores Umbridge, and John Dawlish tried to arrest the latter for supposedly planning to overthrow the Ministry, through Dumbledore's Army.[14]

"Fawkes swooped down in front of Dumbledore, opened his beak wide, and swallowed the jet of green light whole. He burst into flame and fell to the floor, small, wrinkled, and flightless."
—Fawkes swallowing a Killing Curse for Dumbledore[src]

During Dumbledore's duel against Lord Voldemort in the ministry atrium in 1996, Fawkes swallowed a Killing Curse intended for Dumbledore, thus giving Dumbledore time to defend himself against Voldemort's second oncoming attack. He burst into flame upon swallowing the curse and was later reborn from the ashes.[3] He was later returned to Dumbledore's office after Harry Potter was sent there, following his departure from the British Ministry of Magic.[15]

"Somewhere out in the darkness, a phoenix was singing in a way Harry had never heard before; a stricken lament of terrible beauty... They all fell silent. Fawkes's lament was still echoing over the dark grounds outside."
—The Phoenix Lament[src]

After Dumbledore died during the Battle of the Astronomy Tower in 1997 at the assumed hands of Severus Snape, Fawkes sang his Lament to the assembled mourners. This Lament affected all with its beauty. Fawkes subsequently left Hogwarts, as his ties to the school were now dead.[8] He never returned and became a wild Phoenix once more.[10]

During the 2010s, Fawkes appeared as a Foundable during the Calamity. Volunteer members of the Statute of Secrecy Task Force were able to free him, allowing Fawkes to return to his original time.[16]

Fawkes had crimson feathers on his body and a golden tail as long as a peacock's. He was roughly the size of a swan. His claws and beak were gleaming gold — the latter was "long" — and his eyes were black. The scarlet body feathers glowed faintly in darkness, while the golden tail feathers were hot to the touch, though it is unknown if they were actually capable of burning someone as neither Harry — when Fawkes carried him from the Chamber of Secrets in 1993[5] — nor Dumbledore — when he escaped the Ministry officials with Fawkes's help in 1996[14] — were burned by his tail feathers, however it is possible that Fawkes could control the temperature of his tail feathers and chosen not to burn them.

"Fawkes. You were fantastic, Fawkes..."
—Harry congratulating Fawkes's bravery in the Chamber of Secrets[src]

Fawkes served as Albus Dumbledore's messenger and his constant companion, forming a close bond with the old wizard. Fawkes was also affiliated with Harry Potter and the members of the Order of the Phoenix and was the inspiration for its name.

Fawkes was extremely loyal and courageous, as displayed by his attack on Salazar Slytherin's basilisk[5] and his defence of Dumbledore during his duel with Voldemort.[3] Considering he came back to life every time he died he had no reason to fear death and was therefore willing to sacrifice himself for people who won his loyalty.

He was also shown to be highly intelligent, being capable of understanding Dumbledore and bringing Harry the Sorting Hat and the diary when he needed them.[5]

After Dumbledore's death, he returned to the wild with no ties to another human.[10]

"There was a flash of fire and the phoenix had gone."
—Fawkes apparating via fire[src]

"It’s a shame you had to see him on a Burning Day. He’s really very handsome most of the time, wonderful red and gold plumage. Fascinating creatures, phoenixes. They can carry immensely heavy loads, their tears have healing powers, and they make highly faithful pets."
—Dumbledore's affection for Fawkes[src]

Fawkes had a very close relationship with Albus Dumbledore. Dumbledore cared for Fawkes after each of his rebirths, and in return he was very faithful to the elderly wizard. Fawkes protected Dumbledore in his duel with Lord Voldemort in the ministry atrium in 1996 by swallowing a Killing Curse aimed at him,[3] and teleported Dumbledore away from the school when the Ministry attempted to arrest him in 1996, for supposedly building an army (Dumbledore's Army) in what the minister Cornelius Fudge believed to be an attempt to overthrow the Ministry of Magic.[14]

When Dumbledore died in 1997, Fawkes sang a lament for his now deceased master that was described as both sad and beautiful, then left the school forever.[8] Dumbledore also named the Order of the Phoenix after his beloved friend and champion.

"Harry suddenly became aware that Fawkes had left his knee. The phoenix had fluttered to the floor. It was resting its beautiful head against Harry's injured leg, and thick, pearly tears were falling from its eyes onto the wound left by the spider. The pain vanished. The skin mended. His leg was repaired."
—Fawkes heals an injured and pained Harry[src]

Fawkes aided those who were loyal to Dumbledore, such as Harry Potter. In 1993, he brought the Sorting Hat to Harry in the Chamber of Secrets, and defended him from Salazar Slytherin's Basilisk by pecking out its eyes. When a fang pierced Harry's arm and poisoned him with its venom, Fawkes used his tears to heal the wound, saving Harry's life. He then brought the Horcrux diary to Harry so he could destroy it.[5] Harry frequently greeted Fawkes when he visited Dumbledore's office and Fawkes also healed his Acromantula venom wounded arm after he escaped Lord Voldemort during his fourth year[9]. Harry was deeply mournful when Fawkes left Hogwarts, given his immense loyalty and service to him over the years.[8]

It should be noted that Harry's wand happened to be made with one of Fawkes's tail feathers. Whether this had anything to do with his bond with Harry or whether it was simply a coincidence is unknown. Lord Voldemort was the only other known wizard who had a wand made from one of Fawkes's feathers.[9]

Fawkes is named after Guy Fawkes, since he periodically explodes (in order to be reborn from the ashes, like all phoenixes), a joke on the author's part. 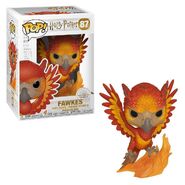 Fawkes as a POP! Vinyl

Albus Dumbledore with Fawkes as a POP! Vinyl

Albus Dumbledore with Fawkes as a LEGO mini-figure (2020 edition) 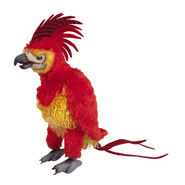 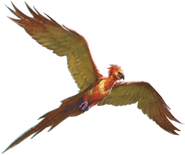 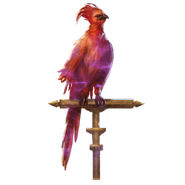 Fawkes as seen in Harry Potter: Puzzles & Spells
Add a photo to this gallery

The Harry Potter Wiki has 103 images related to Fawkes.

Retrieved from "https://harrypotter.fandom.com/wiki/Fawkes?oldid=1382273"
*Disclosure: Some of the links above are affiliate links, meaning, at no additional cost to you, Fandom will earn a commission if you click through and make a purchase. Community content is available under CC-BY-SA unless otherwise noted.