Harry Potter Wiki
Register
Don't have an account?
Sign In
Advertisement
in: The Wizarding World of Harry Potter

Flight of the Hippogriff

Flight of the Hippogriff is one of the three main ride attractions at The Wizarding World of Harry Potter, located in the Universal Orlando Resort theme park, Islands of Adventure. It is also set to be included as the secondary attraction to the Universal Studios Japan version of the land.

As with the Dragon Challenge attraction, Flight of the Hippogriff is also a roller coaster attraction, yet is more family oriented. Based on the movie version of Harry Potter and the Prisoner of Azkaban, this attraction features an encounter with an animatrontic recreation of "Buckbeak the Hippogriff", and enables the participants to have a training flight on a rollercoaster train shaped like a Hippogriff.[1] 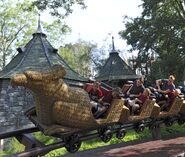 The view of Buckbeak from on the ride