"They bought Harry’s school books in a shop called Flourish and Blotts where the shelves were stacked to the ceiling with books as large as paving stones bound in leather; books the size of postage stamps in covers of silk; books full of peculiar symbols and a few books with nothing in them at all."
— Description of Flourish and Blotts[src]

Flourish and Blotts Bookseller was a bookshop in North Side, Diagon Alley, about halfway down the street on the left hand side.[1] Established in 1654,[3] it was where most Hogwarts students purchased their schoolbooks. The shop was filled with bookshelves stacked to the ceiling.[2]

The shop had had a few problems with certain books, such as The Invisible Book of Invisibility which cost them a great deal of money to buy and had gone missing very early in its hours of being sold due to its invisibility, and The Monster Book of Monsters which tore itself apart and bit the manager when he tried to get a copy off the shelf.[4]

The shop held occasional book-signings, such as when Gilderoy Lockhart stopped by in 1992 to sign copies of his latest book Magical Me.[5] Flourish and Blotts also ran a service which enabled purchasers to buy books via owl delivery.[6] They also took advance orders for books that were in high demand, such as The Life and Lies of Albus Dumbledore.[7]

Flourish and Blotts was first established in Diagon Alley in the year of 1454.[3]

On 19 March 1927, Flourish and Blotts and Obscurus Books held a book lauch party for Newton Scamander's Fantastic Beasts and Where to Find Them.[8]

During the 1988–1989 school year, Jacob's sibling and either Merula Snyde, Bill Weasley or Jae Kim came to the shop to ask Madam Villanelle about Mundungus Fletcher.[9]

At the end of this school year, Jacob's sibling and Bill came again to purchase some books about curse-breaking.[10]

During the 1989–1990 school year, Jacob went to the shop to buy books about Mahoutokoro School of Magic. Jacob's sibling later came and Madam Villanelle told them what their brother had done there.[11]

Jacob's sibling later came to talk to Chester Davies about infiltrating the Ministry of Magic.[12]

Jacob's sibling, Chiara Lobosca and Talbott Winger later came to read up about Grindylows, but found some information on the Whomping Willow instead.[13]

Jacob's sibling and Chiara later returned to research about Merpeople and found that the local Merpeople were fond of music.[14]

During the 1990–1991 school year, Jacob's sibling and Ben Copper paid Madam Villanelle a visit in Flourish and Blotts during their investigation of Garrick Ollivander's misfiring wand.[16]

Flourish and Blotts was briefly closed during the summer of 1991, as they were dealing with an outbreak of bookworms.[17]

In 1991, Harry Potter and Rubeus Hagrid visited Flourish and Blotts whilst shopping in Diagon Alley, in order to purchase all of Harry's assigned Hogwarts textbooks. Harry also was interested at a copy of Curses and Counter-Curses, however Hagrid made him put the book down after telling him he was too young to begin casting curses.[2]

"We can actually meet him! I mean, he’s written almost the whole booklist!"
— Hermione Granger's excitement at meeting Gilderoy Lockhart in Flourish and Blotts[src]

Sometime in early 1992, Flourish and Blotts was closed as it attempted to locate its order of Disappearing Ink. In August of 1992, famous wizard author Gilderoy Lockhart held a book signing at the shop and used it as an opportunity to announce his taking of the post of Defence Against the Dark Arts professor at Hogwarts School of Witchcraft and Wizardry that year. In an effort to gain more publicity, he dragged Harry Potter into the spotlight against his will and gifted Harry a complete set of his books.

During the Christmas holidays, the bookshop was temporarily closed, as they were still tidying up after Gilderoy Lockhart's book signing in August.[18]

"Harry got a surprise as he looked in at the bookshop window. Instead of the usual display of gold-embossed spellbooks the size of paving slabs, there was a large iron cage behind the glass that held about a hundred copies of The Monster Book of Monsters. Torn pages were flying everywhere as the books grappled with each other, locked together in furious wrestling matches and snapping aggressively."
— Copies of The Monster Book of Monsters fighting each other in Flourish and Blotts[src]

In late summer of 1993, the front window of Flourish and Blotts held an iron cage filled with hundreds of copies of The Monster Book of Monsters. To deal with the vicious books set for the third year Care of Magical Creatures class taught by Rubeus Hagrid, the harassed manager had to gear up with thick gloves and jab at them with a knobbly walking stick, as the books tend to viciously rip and tear each other apart.[4]

When Harry Potter, Hermione Granger, and Ron Weasley went to the shop to buy their schoolbooks, the manager almost cried when Ron and Hermione said they wanted two copies of The Monster Book of Monsters, but was very relieved when Harry noted that he already had a copy. Harry also asks for a copy of Unfogging the Future to which the manager leads them to a small corner in the back of the shop where a small table lies for books on Fortune Telling, such as: Predicting the Unpredictable: Insulate Yourself Against Shocks, Death Omens: What to Do When You Know the Worst is Coming, and Broken Balls: When Fortunes Turn Foul.[4]

In the summer of 1994, Molly Weasley went to Flourish and Blotts to get three copies of The Standard Book of Spells, Grade 4 for Harry, Ron, and Hermione.[19]

"Mum, d'you honestly think You-Know-Who's going to be hiding behind a bookshelf in Flourish and Blotts?"
— Ron Weasley to his mother in 1996[src]

In the summer of 1996, Harry, Hermione and Ron went to Diagon Alley to buy their school supplies for their upcoming sixth year, with Ron's parents Arthur and Molly, along with his sister Ginny. Because Molly was feared of entering Diagon Alley without her husband Arthur Weasley due to the return of Lord Voldemort and his Death Eaters, Ron joked to his mother that Voldemort would not be hiding behind a bookshelf in Flourish and Blotts. When they were all at Diagon Alley, Molly, Arthur and Ginny went to Flourish and Blotts, whilst Harry, Hermione and Ron went to Madam Malkin's instead.[20] When the school year had started, as Harry and Ron thought they would not make the cut to proceed to N.E.W.T.-level Potions class, they did not buy the necessary textbook.[21]

However, with the new Potions Master Horace Slughorn lowering the entrance standards to "Exceeds Expectations" (as opposed to Severus Snape's only admitting "Outstanding" students to his classes), Harry and Ron took the subject,[21] and wrote to Flourish and Blotts to get a copy of the book delivered to them.[21][6]

Flourish and Blotts was filled to the brim with books. Shelves upon shelves lined the walls, from ceiling to floor. The books were of all sizes and different varieties.[2] In fact, there were so many books that various signs were posted throughout the shop, as a means of helping customers find what they needed. The front windows usually contained displays of gold-embossed spellbooks the size of paving slabs.[4] 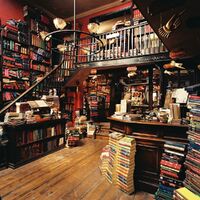 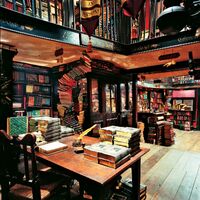 In addition to the store's manager, who at times helped customers himself,[4] the store also employed an assistant manager (paid 42 Galleons a month)[22] and an assistant.[5] The job was not altogether easy, as wizarding books might have attempted to bite or simply gone completely invisible,[4] and fights — like the scuffle between Arthur Weasley and Lucius Malfoy in 1992, that sent books raining down on everyone's heads[5] — were apparently commonplace enough that a classified posting for a new assistant manager required that he or she be "good at breaking up fights".[22]

The Harry Potter Wiki has 66 images related to Flourish and Blotts.

Deutsch Deutsch Español Suomi Français Italiano Nederlands Polski Português do Brasil Русский 中文
*Disclosure: Some of the links above are affiliate links, meaning, at no additional cost to you, Fandom will earn a commission if you click through and make a purchase. Community content is available under CC-BY-SA unless otherwise noted.
Advertisement