"They were looking straight into the eyes of a monstrous dog, a dog that filled the whole space between ceiling and floor. It had three heads. Three pairs of rolling, mad eyes; three noses, twitching and quivering in their direction; three drooling mouths, saliva hanging in slippery ropes from yellowish fangs. It was standing quite still, all six eyes staring at them, and Harry knew that the only reason they weren't already dead was that their sudden appearance had taken it by surprise, but it was quickly getting over that, there was no mistaking what those thunderous growls meant."
—Harry Potter, Ron Weasley, Hermione Granger and Neville Longbottom encountering Fluffy[src]

Fluffy was a gigantic, monstrous male three-headed dog who was once cared for by Rubeus Hagrid. Fluffy's greatest weakness was the inability to resist falling asleep to the sound of music.[1]

Rubeus Hagrid originally purchased Fluffy from a "Greek chappie" at The Leaky Cauldron. Hagrid loaned Fluffy to the headmaster, Albus Dumbledore, to aid in guarding the Philosopher's Stone, during the 1991–1992 school year.[2] In addition, as further insurance against intruders, the door leading to the room Fluffy was in was locked magically.[3]

Harry Potter, Hermione Granger and Ron Weasley, along with Neville Longbottom, first encountered Fluffy when Draco Malfoy challenged Harry to a duel, which he accepted. When Hermione tried to stop Harry and Ron from sneaking out later that night, she found herself locked out of the Gryffindor Tower, as the Fat Lady had left sometime earlier, and ended up going along with them. Neville Longbottom, who had forgotten the password to the common room and was sleeping on the floor outside, joined them as well. When they arrived at the Trophy Room, the intended site of the duel, Malfoy was nowhere to be found. To avoid being caught by Argus Filch, they ran away and ended up in the forbidden area on the third floor, staring at the massive three-headed dog. Despite being furious about having broken countless school rules, Hermione had noticed that the dog was standing on a trap door, and guarding something.[3] They later deduced, from hints about Nicolas Flamel dropped unintentionally by Hagrid, that this "something" was the Philosopher's Stone.

Later that year, Hagrid happily told the trio that he had a won a dragon egg in a card game at the Hog's Head. Thinking that it was too much of a coincidence that, as Hagrid had always dreamed of owning a dragon, someone just happened to show up at the local pub with a dragon egg, the trio questioned Hagrid about the supposed dragon dealer. Upon finding out that Hagrid had never even seen the man's face, as he wore a hood, yet Hagrid had drunkenly told him how to get past Fluffy, they came to the conclusion that the hooded man must have been Severus Snape, when it was really Quirinus Quirrell. Before Hagrid told Quirrell, though he didn't know it was Quirrell, Hagrid and Dumbledore were the only ones who knew how to get past Fluffy.[4]

As that meant the stone was no longer safe, they decided to go after Snape themselves, and Harry brought along the flute that Hagrid had given him for Christmas to use in lulling Fluffy to sleep. Arriving at the room, they noticed an enchanted harp at a sleeping Fluffy's feet, and believed that Professor Snape was already on his way to retrieving the stone. Fluffy soon awoke, as the enchantment on the harp wore off, and it stopped playing. As Harry played the flute, which almost immediately put Fluffy back to sleep, Ron crept over to the trap door and opened it, but was unable to see anything below. Hermione took over playing the flute, while Harry jumped in first, followed by Ron. After they called up to Hermione that it was safe, she stopped playing and jumped down the trap door just in time, as Fluffy woke up as soon as the music stopped.[1]

After Fluffy's duties were done, and the Stone was destroyed, Hagrid set Fluffy free temporarily in the Forbidden Forest.[5] Shortly thereafter, he was sent back to his native Greece by Dumbledore.[6]

In 2019, Fluffy was suspected to have been involved in an incident with a taco truck.[7]

Fluffy was generally vicious, fierce, and extremely strong, though he possibly acted somewhat more docile around certain people, like Rubeus Hagrid, who was able to get Fluffy into the third floor corridor. One known way to calm Fluffy was to play music, which made him fall asleep.[1] Three-headed dogs were very rare creatures, and it is unknown if, like the Runespoor, each head served a different purpose. 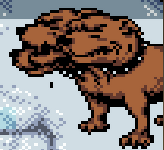 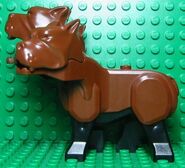 Fluffy as a LEGO minifigure

Fluffy as seen in Harry Potter: Puzzles & Spells
Add a photo to this gallery

The Harry Potter Wiki has 40 images related to Fluffy.

Retrieved from "https://harrypotter.fandom.com/wiki/Fluffy?oldid=1400506"
*Disclosure: Some of the links above are affiliate links, meaning, at no additional cost to you, Fandom will earn a commission if you click through and make a purchase. Community content is available under CC-BY-SA unless otherwise noted.