This article is about the subject taught in wizarding schools. You may be looking for magical flight in general.

"At three-thirty that afternoon, Harry, Ron, and the other Gryffindors hurried down the front steps onto the grounds for their first flying lesson. The Slytherins were already there, and so were twenty broomsticks lying in neat lines on the ground. "
— Harry Potter's first Flying lesson in September 1991[src]

Flying,[1] also known as Broom Flight Class,[3] was a subject taught at Hogwarts School of Witchcraft and Wizardry. It was taught by Madam Rolanda Hooch, the Hogwarts Flying Instructor and Quidditch referee. The subject taught students how to fly broomsticks.[1]

The approach of this class was heavily anticipated by students, who often told exaggerated tales of past flying achievements. Ron Weasley told anybody who would listen how he hit a hanglider with Charlie's old broom.[1]

During the 1988–1989 school year at Hogwarts School of Witchcraft and Wizardry, during the Outdoor celebration of magic, Madam Hooch and Professor Silvanus Kettleburn gave a combined Care of Magical Creatures and Flying class to fifth year students on the Training Grounds about how to fly Griffins. Jacob's sibling was chosen to fly the Griffin present, and found the experience exhilarating.[4]

"Keep your brooms steady, rise a few feet, and then come straight back down by leaning forward slightly. On my whistle — three — two —"
— Hooch teaching first years in 1991[src]

During Harry Potter's first flying lesson, Madam Hooch had to leave the class unattended when Neville Longbottom crashed and fell from his broomstick. In her absence, Draco Malfoy discovered a Remembrall that Neville had dropped, and flew off with it when Harry demanded it back. Harry followed Malfoy on his broomstick, and although he had never flown before, he was able to control the broom with ease and managed to catch the Remembrall in a 50 foot dive when Malfoy threw it. Professor McGonagall witnessed the catch, and instead of punishing Harry for not staying on the ground as Madam Hooch had ordered, she offered him the place of Seeker in the Gryffindor Quidditch team. Fred and George Weasley noted that the Hogwarts brooms were not very good. The brooms did odd things such as fly too far to the left, and vibrate slightly when they were flown too high.[1]

During the 2017–2018 school year, when Madam Hooch was teaching first years how to summon their brooms, students such as Yann Fredericks and Rose Granger-Weasley were highly successful with mastering broom summoning, however, Albus Potter, Harry Potter's son, failed to summon his broom, much to his humiliation.[5]

"Madam Hooch then showed them how to mount their brooms without sliding off the end, and walked up and down the rows correcting their grips. Harry and Ron were delighted when she told Malfoy he’d been doing it wrong for years."
— Madam Hooch teaching first years how mount their brooms[src]

The course aimed of these lessons were largely aimed towards providing students with a basic understanding of the only the most elementary principles behind the study of broomology, which was to say, both how to handle a broom and progressively work on various techniques and manoeuvres performed while in flight, as well as receiving proper instructions on the subject of proper broom care and maintenance. During the tenure of Madam Rolanda Hooch, she would often warn her pupils against erratic flying, emphasising the importance of remaining focused, as the consequences of allowing oneself to become distracted or take unnecessary risks while in the air could, in the worst cases, cause the rider to slide off their broom and fall to their deaths.[1]

In some lessons, the use of enchanted rings was used to guide flight.[6]

Forbidden from bringing their own brooms to the school in their first year, the students would each be supplied with a school broom, which were old and of poor quality, yet passable for the use of teaching pupils to fly.[1]

"Well, what are you all waiting for? Everyone stand by a broomstick. Come on, hurry up. Stick out your right hand over your broom, and say ‘Up!"
— Madam Hooch commanding her first year students to summon their brooms[src]

While in the first year, it was required that every student took flying, so that they would learn the basics before the second year.[1]

While no longer obligated to continue with the class, students who were interested in joining their House Quidditch teams or simply enjoyed flying may have chosen to continue with the subject to improve their skills, although it was not a requirement.[9] During the second year, lessons were mainly spent honing their reflexes.[6]

Having spent the past year working on their speed, agility and precision, during the third year, lessons would mainly be spent advancing to a set of increasingly challenging manoeuvres to improve their technique, with some of them being useful on the Quidditch pitch.

Having demonstrated sufficient skill and savvy with a broom to pull off a range of basic and not-so-basic techniques, during the fourth year, lessons would advance to trickier and more difficult manoeuvres, such as some of those used during Quidditch matches.

Having proven themselves to be thoroughly proficient on a broom during the previous term, fifth-year students would advance to ever more difficult manoeuvres, some of which could be used during Quidditch matches.

During the seventh year, students could continue to learn advanced flying techniques. 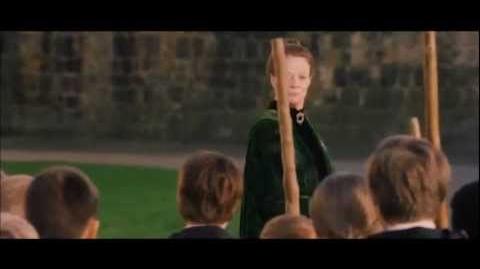 This article or section is a stub. You can help by expanding it.
Deutsch Español Français Italiano Polski
*Disclosure: Some of the links above are affiliate links, meaning, at no additional cost to you, Fandom will earn a commission if you click through and make a purchase. Community content is available under CC-BY-SA unless otherwise noted.
Advertisement