Arthur: "But the things our lot have taken to enchanting, you wouldn't believe —"
Molly: "LIKE CARS, FOR INSTANCE?"
Arthur: "C-Cars, Molly dear?"
Molly: "Yes, Arthur, cars. Imagine a wizard buying a rusty old car and telling his wife all he wanted to do with it was take it apart to see how it worked, while really he was enchanting it to make it fly."
— Exchange between Arthur and Molly Weasley[src]

The Flying Ford Anglia was a light blue Ford Anglia 105E Deluxe that was enchanted by Arthur Weasley to fly, as well as to become invisible, with the use of a specially installed device called an Invisibility Booster. It was also modified so that it could fit eight people, six trunks, two owls, and a rat comfortably.[1]

Flight between Little Whinging and the Burrow

"Your sons flew that enchanted car of yours to Surrey and back last night."
—Molly Weasley on her son's flight[src]

The Flying Ford Anglia was used on 3 August 1992 by Fred, George, and Ron Weasley to rescue Harry Potter, who was locked up in his room at the Dursleys' and had been unable to receive any mail from the Wizarding community as a result of Dobby's attempts to protect him. When they arrived at 4 Privet Drive, the Weasley boys pulled the car up to Harry's window, alerting him to their presence, after which they proceeded to pull off the bars on Harry's window and help him retrieve his things. As they were returning to the Burrow, Harry was worried that his friends would get in trouble for using the car due to the Reasonable Restriction for Underage Magic, but as they did not place the spell upon the car and were only borrowing it, it didn't count.[2]

Upon their return to the Burrow, Mrs Weasley was furious with her sons for taking the car but placed no blame on Harry. The next morning, at breakfast, Mrs Weasley told Mr Weasley what the boys had done, and, startled, he began to ask how it went before hastily switching to a reprimand at a look from his wife. He tried to excuse the car by referring to a loophole in the law regarding ownership of charmed objects, but Molly noted that he wrote that law intentionally making sure that there was a loophole which legally allows him to charm Muggle objects.[2]

On 1 September 1992, the Weasley family and their things piled into the magically expanded interior for the ride to King's Cross Station to catch the Hogwarts Express.[1]

At the start of their second year, Harry and Ron used the enchanted car to get to Hogwarts when the entrance to Platform 9¾ was sealed by Dobby, in another attempt to protect Harry by preventing his return to school. Ron was worried that his parents might not be able to get back through, so they used the car to fly to Hogwarts. Just as they arrived on school grounds, the car began to break down and they ended up crashing into the Whomping Willow. The car, after having unloaded everything and everyone in it, drove off into the Forbidden Forest. Professor Snape informed them that their journey was "seen by no less than seven Muggles" and that if it had been up to him he would have had them on the train back to London the very same night. Minerva McGonagall was however in charge of their discipline as she was Head of Gryffindor House, and gave them both detention.[1]

Arthur Weasley faced an inquiry at work following this incident.[3] By Christmas, the Daily Prophet reported that he was fined fifty Galleons for bewitching the Muggle car.[4]

Near the end of the school year, on 24 May 1993, the car turned up and saved Harry, Ron, and Hagrid's dog, Fang, from Aragog's family. After depositing them outside the forest, it reversed back into it and disappeared from view.[5]

At some point between 1993 and 1998, the car may have been taken into the Room of Requirement by a member of the Hogwarts staff as a similar car appeared upside-down during the students' escape from Fiendfyre. It was presumably destroyed along with the other artefacts in the room.[6] 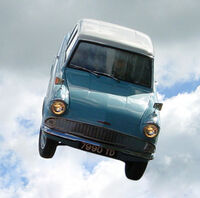 Retrieved from "https://harrypotter.fandom.com/wiki/Flying_Ford_Anglia?oldid=1347791"
*Disclosure: Some of the links above are affiliate links, meaning, at no additional cost to you, Fandom will earn a commission if you click through and make a purchase. Community content is available under CC-BY-SA unless otherwise noted.