This article is about the Thunderbird. You may be looking for a person called Frank.

Newt Scamander
Frank was the name Magizoologist Newt Scamander gave to a Thunderbird he rescued from traffickers in Egypt in the 1920s.[1] Newt described him as a majestic, powerful, and regal creature, but a "wee-bit sensitive to strangers".[2]

Around 1926, Albus Dumbledore informed Newt of illegal traffickers in Egypt that had a captured Thunderbird in their possession. The young Magizoologist travelled to Egypt and rescued the bird, naming him Frank and promising to return him to his native habitat in Arizona. Though one of Frank's legs bore the wounds of being chained, his gratitude to Newt was "evident"[3]

In 1926, Scamander travelled the United States of America, using a muggle passenger ship. He hoped to avoid the attention of the MACUSA, due to their laws regarding private possession of Magical Creatures at that time. After a journey he landed in New York City.

Around that time, there were a large number of magical incidents in the city. Some were indirectly caused by Scamander and the creatures that escaped his suitcase, but others were caused by the young Obscurial, Credence Barebone, and the Dark Wizard Gellert Grindelwald, who hoped to use Barebone's destructive powers for his own purposes. These incident culminated in the Obscurial attack on New York.

After the battle, Newt gave Frank a vial of Swooping Evil venom, taking advantage of the Thunderbird's weather related powers to spread the venom through a rainstorm. Exposure to the diffused venom had the effect of wiping negative memories and so wiped New York's No-Maj population of their memories of the devastation.

Frank managed to return to Arizona after being released, presumably flying under his own power.[4]

Newt later came to believe that Dumbledore had given him the tip about Frank to deliberately arrange for Newt to go to New York to oppose Grindlewald's activities there.[5] 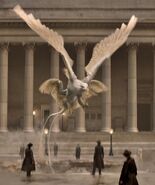