"Large frog covered in a thick, dark skin. It has been known to give warts to its handlers."
— Folio Bruti[src]

The Giant Purple Toad[2] also known as the Bullfrog,[4] was a large, magical species of toad.[3] 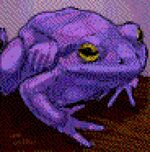 Its diet consisted mostly of dead blowflies and other insects.[3] It had a long, green tongue,[2] thick, purple skin covered in warts,[4] and it liked to hide under objects, such as boxes.[5] Individuals not wearing gloves might have received warts themselves.[4]

Giant Purple Toads had the ability to stun a human whenever disturbed, and were particularly vulnerable to the Verdimillious Charm spell, but resistant to the Fire-Making Spell.[4]

Its warts (which could be removed with a Knockback Jinx) were used in the Dragon Tonic. However, having warts removed annoyed them, and they disappeared into a box or other hideout to spite the wizard who needed the warts.[5]

Giant Purple Toads and their warts were sold at the Magical Menagerie.[3][5]

Before the start of the 1993–1994 school year at Hogwarts School of Witchcraft and Wizardry, Harry Potter, Ronald Weasley and Hermione Granger spotted several of these toads whilst shopping in the Magical Menagerie in Diagon Alley, amongst other creatures such as Streelers and Fire Crabs.[3]

Deutsch Español Suomi Français Русский
*Disclosure: Some of the links above are affiliate links, meaning, at no additional cost to you, Fandom will earn a commission if you click through and make a purchase. Community content is available under CC-BY-SA unless otherwise noted.
Advertisement