"Now, Professor Dumbledore has granted me permission to start this little duelling club, to train you all in case you ever need to defend yourselves as I myself have done on countless occasions - For full details, see my published works."
— Gilderoy Lockhart[src]

The published works of Gilderoy Lockhart were all of the works written by this noted and best-selling author. Due to their popularity, the books were rather expensive.[1] 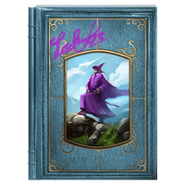 Break with a Banshee

Year with the Yeti

The published works of Gilderoy Lockhart was a collection of what appeared to be autobiographical books containing the highlights from a life dedicated to the eradication of the Dark Forces. They were written as though the heroics described in them were accomplished by Lockhart himself and rife with exaggerations and embellishments to make said accounts sound even more impressive than they were originally when he first heard them from the dozen great witches and wizards whose feats of bravery he stole the credit by modifying their memories to make them forget that they themselves had accomplished what Lockhart would later proclaim to have done himself.[6][7] Despite of the revisions he did to these tales, however, they were completely believable and accurately described how to confront and handle a myriad dangerous situations; seen as how his books received best-seller status and even former teachers thought they might have misjudged him when word reached Hogwarts of all the feats of bravery he was said to have been credited with after his graduation. These accounts included:

Lockhart assigned seven of his books for all students the 1992–1993 school year of Hogwarts School of Witchcraft and Wizardry for Defence Against the Dark Arts, each of which costs 5 galleons, resulting in an expensive 35 galleons book list.[1] It was actually an excuse for Lockhart to sell his books to students.[1][8]

Lockhart gave Harry Potter a complete set of his collected works for appearing with him in a photo op for the Daily Prophet in Flourish and Blotts, though Potter had no desire for the event or the books, and donated them to Ginny Weasley.[1]

Lockhart admitted that had the readers learned that he was not the hero he wrote himself to be, his books would not have "sold half as well".[6]

A wizard placed a "for sale" ad in the classifieds of the 8 February 1999 Daily Prophet for a set of the collected works of Gilderoy Lockhart.[12]

Although Lockhart was a fraud and his books depicted him accomplishing feats far beyond his abilities, it is possible that the "wealth of invented details" Lockhart added was merely literary devices to make the dangers described sound more profound and the tales of how they were overcome more thrilling to the reader, but otherwise contain instructive safety- and survival tips on how to get out of encounters with various dangerous, dark creatures alive. After all, Hermione Granger would have unlikely considered taking one of Lockhart's books with them on the Horcrux hunt,[13] if its content could not be applied practically in fending off dark creatures such as those they might encounter out in the real life.

Español
*Disclosure: Some of the links above are affiliate links, meaning, at no additional cost to you, Fandom will earn a commission if you click through and make a purchase. Community content is available under CC-BY-SA unless otherwise noted.
Advertisement