"Historically important to the wizarding world, it is the celebrated village where Voldemort was first defeated."
— Outview of the village[src]

Godric's Hollow was a village in the West Country[1] of England. It was a small community, which centred on a village square with only a church, a post office, a pub, and a few retail shops. The residential streets were lined with quaint cottages, there was an area called Church Lane that lead up to the church.[3]

Godric's Hollow was inhabited by a number of notable wizarding families. The Dumbledore family and Bathilda Bagshot both resided in the village.[2] It was perhaps most famous as where Harry Potter and his parents lived when he was a baby, where they were murdered, and Lord Voldemort met his first downfall. Thus, the village was notable as the place where Harry Potter became known as the "Boy Who Lived". Despite this, Harry did not revisit the village until Christmas of 1997.[4]

According to A History of Magic, the graveyard was rumoured to be haunted.[4] At any time, it was forbidden to park in Godric's Hollow between 1 May to 30 September.

Godric's Hollow was famed as the birthplace of Godric Gryffindor, and also as the final resting place of at least one of the Peverell family.

In A History of Magic, Bathilda Bagshot writes that Godric's Hollow was one of a number of villages where wizards settled in relatively large numbers after the ratification of the International Statute of Secrecy in 1689. Large numbers of witches and wizards grouped together to provide support for each other, after facing many years of persecution at the hands of Muggles, finding safety in numbers.

It appears that the Dumbledore family moved to Godric's Hollow when Albus Dumbledore's father Percival was imprisoned after his attack on three Muggle boys. He attacked the boys after they inflicted severe mental and emotional damage on his daughter Ariana. Albus and his mother Kendra, sister Ariana, and brother Aberforth lived here, until Kendra's and Ariana's tragic and accidental deaths. At the time, Bathilda Bagshot was their neighbour and eventually became a good friend of the family, privy to the family's many secrets.

In 1899, a three-way duel broke out between Gellert Grindelwald, Albus Dumbledore, and Aberforth Dumbledore. The duel took place after Aberforth angered Grindelwald. He attacked Aberforth, using the Cruciatus Curse on him. Albus stepped in, attempting to defend his younger brother and stop the two fighting. Ariana Dumbledore tried to help, but did not know what she was doing and was inadvertently killed. This experience haunted Albus until his death.

Murder of the Potters

"All anyone knows is, he turned up in the village where you was all living, on Hallowe'en ten years ago. You was just a year old. "
— Overview of Voldemort entering Godric's Hollow[src]

Having been told half of the prophecy by Severus Snape, Voldemort came to believe his mortal enemy to be Harry Potter. After being given the Potters location by a trusted friend of the family (Peter Pettigrew) he travelled to the Potters' home in Godric's Hollow.[5] On 31 October, 1981, James and Lily Potter were murdered by Lord Voldemort in their home as they tried to protect their son. Voldemort lost his powers and physical form when he tried to murder infant Harry, due to Lily's loving sacrifice.[6] James and Lily's bodies were laid to rest together in the Godric's Hollow graveyard. Their tombstone reads, "The last enemy that shall be destroyed is death."[4]

A statue was later erected at the centre of the village square in Godric's Hollow in memory of James and Lily Potter and a dedication to Harry Potter.[4] It's unknown exactly when it was erected and it can be assumed it was commissioned by the wizarding population of the Hollow, and the wider wizarding community of Great Britain.

From a distance, the statue appeared as an obelisk, carved with the names of people who died in a war (presumably Muggle casualties of World War I or World War II). While Muggles can see only this obelisk, a witch or wizard can see that the memorial changed into a statue of a family as he or she approached. It was also said by Harry Potter that in winter time, when snow gathered on the statue's heads, that the carvings appeared to be wearing white fur hats.[4]

"Bathilda must’ve been dead a while. The snake was... was inside her. You-Know-Who put it there in Godric’s Hollow, to wait. You were right. He knew I’d go back."
— Harry Potter regarding Voldemort's motive[src]

Harry Potter and Hermione Granger visited Godric's Hollow in 1997 to find Bathilda Bagshot. They had hoped that Bathilda had the Sword of Gryffindor, which they needed to destroy Lord Voldemort's Horcruxes.[4] Harry first had the idea that he needed to visit Godric's Hollow following the death of Albus Dumbledore, simply getting a feeling that he needed to go there.[7] While there, Harry visited for the first time both his parents' graves and their former home.[4] According to the sign that had been set in the ground outside of the cottage, had been preserved in "its ruined state as a monument to the Potters and as a reminder of the violence that tore apart their family."[8]

This sign was graffitied over the years with names and messages of support for Harry, something that he thought was touching. The house, like the statue, had been made invisible to Muggles. During the same visit, they were attacked by Nagini, disguised as Bathilda Bagshot. Lord Voldemort had previously murdered Bathilda and used Dark Magic to conceal Nagini within her corpse. She could not speak, however, except in Parseltongue, and communicated mainly through gesturing.[8]

After Nagini lured Harry away from Hermione and verified his identity, she telepathically contacted Voldemort, who told her to hold him. However, Hermione intervened, blasting the snake away and Disapparating with Harry just as Voldemort arrived. During the struggle, Harry's wand was inadvertently broken by Hermione's miscast curse. He was therefore required to use a new wand for the remainder of the hunt.[8]

"Cottages stood on either side of the narrow road... A short way ahead a golden glow of streetlights indicated the centre of the village... Behind the church, row upon row of snowy tombstones protruded from a blanket of pale blue that was flecked with dazzling red, gold, and green wherever the reflections from the stained glass hit the snow."
— Description of the village[src]

The Hollow was described as being quaint. There was a narrow road with look-a-like cottages that resided on either side of it. There was streetlights at the centre of the village indicating it as the square. There was also a little church, and behind it, the village's graveyard.

The graveyard was described as having row upon row of tombstones, some very old. The headstones showed members of different wizarding families that were buried there, such as an Abbott and Ignotus Peverell.[4]

Bathilda Bagshot's note that Godric's Hollow was the home of a relatively large number of wizards does not indicate that it was a purely Wizarding village; in fact, Hogsmeade village was the only purely Wizarding village in Britain. As such, wizard residents of Godric's Hollow still had to avoid open use of magic to avoid disturbing the Muggle residents of the village. This is why the monuments to the Potter family were hidden.[8]

Similarly, the Potter cottage on the edge of the village was charmed to be invisible to Muggles. One must assume that a charm similar to the one that hides 12 Grimmauld Place must have been in use at the latter site, to prevent Muggles from trying to build on the apparently empty lot as the village grew.[8] Given the Dumbledore family experience with Muggles, it was a little surprising that the family chose to settle at Godric's Hollow rather than Hogsmeade. However, it is possible that there was some family history that connected the family to this village; and it seems likely that the Dumbledore family chose to live in a part of the village that was primarily wizard-occupied.

Godric's Hollow was one of the places where magical families had come to live alongside Muggles. Over the centuries, it was home to many wizards and witches of note, including Godric Gryffindor, who was born there, and Bowman Wright, who forged the first Golden Snitch there in the Middle Ages.

Others who called the village home were the Dumbledore family, the family of James and Lily Potter, and Bathilda Bagshot. Ignotus Peverell, pure-blood ancestor of Harry Potter, was born and subsequently buried at Godric's Hollow.

Godric’s Hollow was located in the West Country of southwestern England, putting it in the heart of perhaps the most wizarding-friendly region in Britain. Ottery St Catchpole was in this area, as were Cornwall, Devon, several Quidditch teams, and a number of known Quidditch stadiums built on the abundant local moors.[4]

Hagrid’s flight from Godric’s Hollow to Surrey after picking up the infant Harry Potter took him over Bristol,[9] suggesting that the town was located in the northern region of the West Country, near Exmoor and not far from the Bristol Channel. There is some question as to where Hagrid was actually flying from, however.

Godric Gryffindor was described as being from “wild moor”[10], suggesting again the rural nature of the town. The village seemed to have contained only a small number of dwellings overall, as the open country began a short distance from the square.

At the centre of the village itself was a square with a post office, a pub, and a church with a graveyard behind it. In the middle of the square was a war memorial which, upon closer inspection by wizards, transformed into a statue of James, Lily, and young Harry — a monument to their final stand. The graveyard was the final resting place of many witches and wizards.[4] 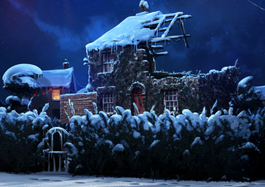 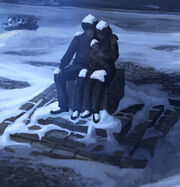 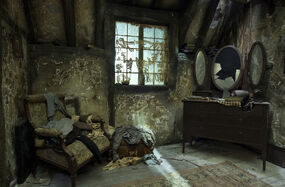 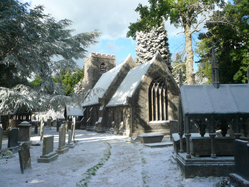 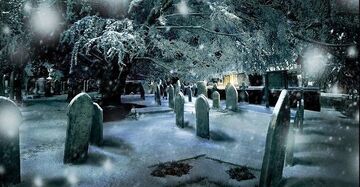 The Harry Potter Wiki has 78 images related to Godric's Hollow.

Deutsch Español Eesti Suomi Français Italiano 日本語 Polski Português do Brasil Русский 中文
*Disclosure: Some of the links above are affiliate links, meaning, at no additional cost to you, Fandom will earn a commission if you click through and make a purchase. Community content is available under CC-BY-SA unless otherwise noted.
Advertisement