"The Gouging Spell enables a witch or wizard to carve through earth and stone with ease. From budding Herbologists digging for Snargaluff seedlings to treasure-hunting curse breakers uncovering ancient wizard tombs, the Gouging Spell makes all manner of heavy labour a matter of pointing a wand."
— Miranda Goshawk, Book of Spells[src]

The Gouging Spell[1] (Defodio) was a charm used to gouge out specific areas of material, such as earth or stone.[1]

During the 1989–1990 school year at Hogwarts School of Witchcraft and Wizardry, Professor Filius Flitwick taught his sixth-years how to cast this particular charm in Charms class.[2] 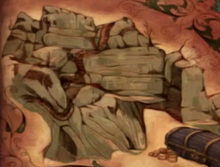 It had practical applications, both in digging and in making passageways through solid rock. Careful use of this spell could dig out the required object and leave the environment relatively untouched.[1]

Deutsch Español Français Italiano Polski Русский
*Disclosure: Some of the links above are affiliate links, meaning, at no additional cost to you, Fandom will earn a commission if you click through and make a purchase. Community content is available under CC-BY-SA unless otherwise noted.
Advertisement