"Harry had never even imagined such a strange and splendid place. It was lit by thousands and thousands of candles that were floating in midair over four long tables, where the rest of the students were sitting. These tables were laid with glittering golden plates and goblets. At the top of the hall was another long table where the teachers were sitting [...] The hundreds of faces staring at them looked like pale lanterns in the flickering candlelight [..] Harry looked upward and saw a velvety black ceiling dotted with stars. He heard Hermione whisper, "It's bewitched to look like the sky outside. I read about it in Hogwarts, A History" It was hard to believe there was a ceiling there at all, and that the Great Hall didn't simply open on to the heavens."
—Description of the Great Hall.[src]

The Great Hall in Hogwarts Castle is the main gathering area in the school located off the Entrance Hall. Students eat their meals, receive daily owl post, and have certain special events here. The Great Hall is a large hall that can easily hold all of the school's students, staff, and guests. It has tall walls that reach up to the ceiling, which is covered with candles and enchanted to look like the sky above. At the front of the hall, is the staff table, also known as the High Table, which is designed to house the entire Hogwarts staff.

The highlight of the table is the throne-like chair in the centre of the table where the current Headmaster or Headmistress sits. The Great Hall, as well as serving as the area for breakfast, lunch, and dinner for the students and staff, was also the place in which many important events took place, such as the traditional Sorting Ceremony each year and the defeat of Lord Voldemort, which signified the close of the Battle of Hogwarts and the climatic end of the Second Wizarding War. To the left of the table is a door which leads to a chamber with portraits.

The Great Hall is a large hall with four long tables where students of each House sit at during mealtimes, as well as the staff table at the front, where the entire Hogwarts staff sits. There is a throne-like chair in the centre of the table where the current Headmaster or Headmistress sits. The ceiling of the Great Hall is covered with candles and it is enchanted to look like the sky above.

To the left of the table is a door which leads to a chamber with portraits. During the Hallowe'en feast, the hall festooned with sweets-filled pumpkins, bats, orange streamers, water snakes and all sorts of Hallowe'en-related decorations, and during the Christmas holidays the hall has twelve large Christmas trees. There is also a large window behind the staff table at the front of the hall where light shines through, and a podium carved with an owl right in front of the Headmaster's chair where the Headmaster makes his announcements for the school year.

Gatherings in the Great Hall 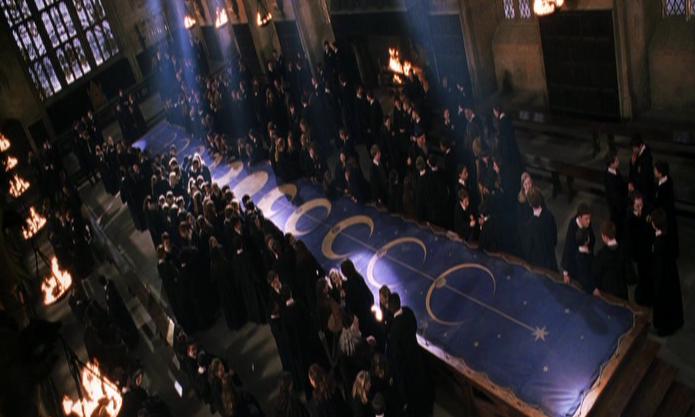 A Duelling Club was started by Professor Lockhart when the Chamber of Secrets was opened, during the 1992–1993 school year. He was given permission to teach students how to duel, in an attempt to help them learn to protect themselves. Lockhart was joined by Professor Snape, who worked as his assistant. In 1996, it was used again as the Gryffindor Duelling Club location.

The Hallowe'en Feast at Hogwarts School of Witchcraft and Wizardry occurs on the 31st October every year. Usually the Hallowe'en Feast is festooned with sweets-filled pumpkins, bats, orange streamers, water snakes and all sorts of Hallowe'en-related decorations. There is usually some entertainment at the end, this may be by the Hogwarts Ghosts who pop out of the walls and do formation gliding. It's a highly anticipated feast which most Hogwarts students look forward to every year.

The Yule Ball is a tradition of the Triwizard Tournament, though not regularly held at Hogwarts School of Witchcraft and Wizardry. It is a formal dance held on Christmas night of a tournament year, and is opened by the tournament champions and their partners. At Hogwarts, where the Yule Ball was held in 1994, only students of fourth year or above were permitted to attend, though younger students could also go if an older student invited them to accompany them. The ball began at 8:00 p.m. and ended at midnight. The hall served several purposes that night; as a socialsing area, a stage for the performing band, and a dance floor for all attendants of the ball.

The Christmas Feast is held on Christmas Day. It is attended by the teachers and any students that have chosen to remain at Hogwarts over the Christmas Holidays. The feast is prepared by the House-elves in the kitchens, and consisted of a hundred fat, roast turkeys, mountains of roasted and boiled potatoes, platters of fat chipolatas, tureens of buttered peas, silver boats of thick, rich gravy and cranberry sauce. For dessert flaming Christmas puddings were served, with silver sickles hidden within the pudding. There are also surprise firecrackers, which, when popped, give forth a gift.

Apparition is an optional twelve-week class offered at Hogwarts School of Witchcraft and Wizardry for, as its name suggests, learning how to Apparate. The class begins shortly after the Christmas Holidays and is offered to students who are seventeen, or who will turn seventeen during the school year, and costs twelve Galleons. It was taught by Ministry of Magic employee Wilkie Twycross in 1997 when the sixth year students that signed up for lessons had to begin in the Great Hall due to weather conditions, before moving the class to the grounds.

An O.W.L. (Ordinary Wizarding Level) is a subject-specific test taken during Hogwarts students' Fifth year, administrated by the Wizarding Examinations Authority. The score made by a student on a particular O.W.L. determines whether or not he or she will be allowed to continue taking that subject in subsequent school years.

During these examinations a giant clock face and a huge swinging pendulum are placed at the far end of the hall in order for students and examiners to keep an eye on the time.[1]

N.E.W.T.s (Nastily Exhausting Wizarding Tests) are subject-specific exams that seventh year wizards and witches at Hogwarts take to help place them in a position at the Ministry of Magic. As not all wizards pass or even take the N.E.W.T.s, they can find other jobs using their O.W.L. results.

The End-of-Term Feast (or Leaving Feast) is a traditional part of the school year at Hogwarts, held in the Great Hall. It occurs on the last night of the term; the Feast is notable for including the awarding of the House Cup to the house with the highest points.

Over the years it has had many other uses including:

In the second part film adaption of Harry Potter and the Deathly Hallows, half of the Great Hall was blown up due to the battle. Because of this, instead of three towers at the top of the Great Hall, there were only two left.

The Great Hall as seen in the films is for the most part consistent with its description in the books. However, the layout of the tables as seen in the films contrasts with that of the books, which suggests that the tables run parallel to the main doors. Also, in the books, the layout of the tables is supposedly Gryffindor, Ravenclaw, Hufflepuff, and Slytherin (from the main doors looking in), whereas throughout the films the layout changes every year but never followed the book order. And in the books, it's implied that there are multiple doors in the Great Hall which lead into various side chambers, though in the films there is only one behind the staff table which leads into the Trophy Room.

The Great Hall set is arguably the most recognizable set from the Harry Potter films and has a rare distinction in the film industry of being in use for nearly a decade.[2] In those years the set has undergone relatively few changes:

Retrieved from "https://harrypotter.fandom.com/wiki/Great_Hall?oldid=842024"
*Disclosure: Some of the links above are affiliate links, meaning, at no additional cost to you, Fandom will earn a commission if you click through and make a purchase. Community content is available under CC-BY-SA unless otherwise noted.