"A sickly green creature with sharp little horns had its face pressed against the glass, pulling faces and flexing its long, spindly fingers."
—Description[src]

A Grindylow was a small, horned, pale-green skinned water demon native to Great Britain and Ireland.[2]

The first stage of a Grindylow's life cycle was the larval stage, where it was referred to as a Grypt. It was also known by several local names, such as a "Pollywiggle" in Ilkley, a "Candypole" in Kettlewell, and a "Jarvis" in Sheffield.[2]

Aggressive towards witches, wizards and muggles alike, the Grindylow was only ever tamed by merpeople; the half-fish water dwellers who sometimes kept them as pets.[2]

Grindylows survived, for the most part, on fish, algae, and small sea creatures; however, occasionally they would eat humans (it is for this reason that they are classified as dark creatures).[2]

These creatures were found in the weed beds at the bottom of lakes in Great Britain and Ireland.[2]

The Grindylow was particularly prevalent in Yorkshire, where it displayed a large amount of physical variation. It was generally found in still or stagnant water. Grindylows also took to urban environments such as Porter Beach in the heart of Sheffield, where they sheltered in submerged shopping trolleys and traffic cones.[5]

The Grindylow was a sickly green colour, with green teeth and small pointy horns on its head. It had long, strong (albeit brittle) fingers which it uses to strangle its prey, and is a rather good swimmer, since it is adapted to live in water.[2]

The Grindylow had long, brittle fingers which despite their fragility were rather strong. The trick to escaping a Grindylow was to break their grip on a person; the Revulsion Jinx would help with this task, as underwater it shot jets of boiling hot water.[6]

"Ah. Why don't you come in? I've just taken delivery of a grindylow for our next lesson."
—Remus Lupin to Harry Potter[src]

Newt Scamander had several Grindylows in his suitcase during his travels to New York in 1926.[7]

Professor Remus Lupin ordered a Grindylow in 1993 for his third year class to study for Defence Against the Dark Arts.[1] After his resignation, he left behind the tank in which the Grindylow was kept.[9]

One year later, the Grindylows of the Black Lake at Hogwarts School of Witchcraft and Wizardry attacked the students competing in the 1994-1995 Triwizard Tournament. They caused the early retirement from the task of Fleur Delacour, and harassed Harry Potter. Harry however managed to repel a swarm of Grindylows by using the Revulsion Jinx underwater, blasting them with hot water and releasing himself from their tight grip, allowing him to continue swimming.[6]

After the Battle of the Seven Potters, at The Burrow, Remus Lupin verified Harry's identity by asking "What creature sat in the corner the first time that Harry Potter visited my office at Hogwarts?" Harry correctly answered Grindylow, which proved to Lupin that he was not a Death Eater impostor.[10]

There was a black market trade in Grindylows, as some wizards enjoyed them (illegally) as a delicacy.[11] 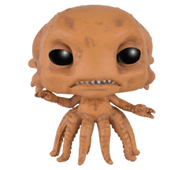 A Grindylow as a POP! Vinyl 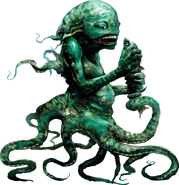 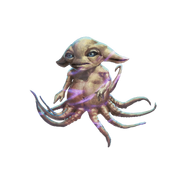 A baby Grindylow as seen in Harry Potter: Wizards Unite

A Grindylow as seen in Harry Potter: Puzzles & Spells 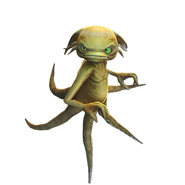 A Grindylow as seen in Harry Potter: Hogwarts Mystery
Add a photo to this gallery

The Harry Potter Wiki has 27 images related to Grindylow.

Retrieved from "https://harrypotter.fandom.com/wiki/Grindylow?oldid=1409454"
*Disclosure: Some of the links above are affiliate links, meaning, at no additional cost to you, Fandom will earn a commission if you click through and make a purchase. Community content is available under CC-BY-SA unless otherwise noted.